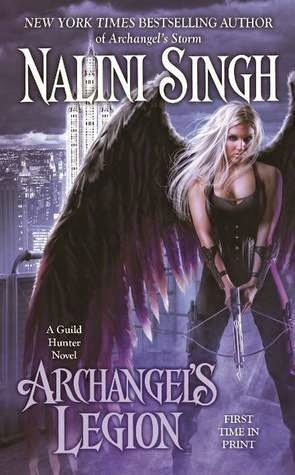 The Cascade is coming, ominous portents rock the world and Archangels are gifted with new powers – and like in previous Cascades, they’re ready to use them in war

In New York, angels fall from the sky, their population decimated by the wounded, the river runs red and it starts raining blood. A new plague impossibly targets vampires and just when Raphael and Elena need their forces to be at their strongest, they are being devastated.

War is coming – and they are not ready.

One of the things this series does well is pacing over the arc of the whole story. In the early books we began with a lot of epic – Uram and Elena becoming an angel and Lijuan destroying Beijing, it was a lot to suddenly be in the middle of it. Then we had a few books that were less epic – introducing some of Raphael’s 7 and their partners in a more low key level while still slowly developing the idea of the Cascade and how everything was brewing – and now we’re getting back into the epic, world-destroying action again. I think that makes the overall arc work really well, keeping things personal as well as epic and avoiding the presentation that this is a world in which the extreme happens all the time and leaving the series in a situation where it constantly has to out-epic itself each book.

This continues with this book – a lot of it is spent on budding ominous action. The Cascade means lots of ominous portents coupled with the Archangels finally marshalling their forces and preparing for war – starting with lots of ominous sneak attacks with their newly gained powers. In response, Raphael is not only preparing his own defences, but martialling whatever alliances he can muster. The book does have some major action moments, but that’s not the core – the core is the preparation, the growing, looming, ominous feeling of menace and the general sense that everything is going to fall apart very soon. It’s a really well maintained theme as Elena runs among all these dramatic actions and preparations while also maintaining her relationships and continuing her character growth.

Of course, when we get to the end of the book we have an awesome epic battle that is, indeed, awesome and epic

There’s also some excellent world building that comes from this – just lots of little indications as to how this world differs from ours – like actual heavy weapons are much less common than in our world because they’re useless against Archangels and wars in their world is pretty much all about the Archangels. Their rules and disdain dictate what military technology is actually useful.

Elena is a really wonderful character and excellently balanced, especially her representation of strength. She’s clearly very brave, very skilled and, yes, very dangerous. At the same time as the youngest angel in the world, she is weak compared to all but relatively new born angels. She’s definitely weak compared to the might Seven, Raphael’s lieutenants, and insignificantly weak compared to Raphael and the other Archangels. But despite not being close to the powers of those around her, she’s still strong, she’s still effective, she still has a meaningful role to play. It’s interesting in a world where some of the characters have such amazingly impossible powers, we see this excellent display of strength, skill and effectiveness from a character so lacking in it – it shows that a strong character is not dependent on them having the shiniest super powers of them all.

She also has some excellent relationships – with Raphael she has a constant conflict over his strength and his inhumanity; this works will with another excellent and nuanced conflict on that humanity both reducing Raphael’s power (at a time when all the other Archangels are getting huge power boosts) but also preserving his conscience and humanity. She also draws strong lines against him treating her like a soldier, servant or lesser – she demands to be listened to and respected no matter how much younger and less powerful she is.

Elena also has relationships beyond Raphael (and it’s a sad statement of so many of the books I’ve read that “having a relationship beyond their love interest is noteworthy). Her friendship with Sara is extremely strong and feels mutual as well (not just a friend who acts in support of Elena). She is forming her own bonds with Raphael’s seven that are independent of him as well as growing and continuing friendships with the protagonists of the previous two books. Then there’s her family – her respect for her father’s second wife, the close bond she has with two of her sisters even as they are overshadowed by past tragedy and ongoing family drama. There’s a lot of women in Elena’s life who she respects. There’s also her relationship with her father which is certainly fraught – but is more complex than the simplistic “my dad is evil, woe!” This works well with the series ongoing excellent treatment of Elena’s grief and childhood trauma – and it is ongoing; there has been no magical healing nor true love conquering all trauma – she is hurt and it will take time for her to work through it.

There continue to be a large number of excellent POC in this series – Elena, of course. The Archangels are predominantly POC from different parts of the world, Raphael’s 7 have several POC, several of the Guildhunters, especially some of the most prominent ones like Ashwini and Ra are also POC. Along with these characters, we have a number of POC making up many of the characters they come across – like the Asian vampire in charge of the blood café (and Elena’s future business partner).

There are no LGBT characters in this book but there’s a continued use of the Gay Maris trope – we have no gay characters but some of the murdered corpses they find were probably gay. This is not the first time this season has relied on LGBT characters who are already dead or only mentioned without being present

I do have an minor iffiness about the way the book ended – in that I’m not entirely sure what happened. I get a vague idea and I also love how it expanded the angel lore of the world and explained so many things, including the existence of vampires and their creation process – but I was vague on exactly what was going on with Raphael, his power and the force related to it. But I think that’s part intent of the book – Raphael and Elena are also supposed to be somewhat in the dark and a little frustrated by the vagueness. This is excellent for the book and promises a lot for the next book since we have a definite mystery and clearly epicness to come – but there is just a teeny tiny element of the big epic ending of this battle seeming to be solved by Unknown Mystery Power.

This was an excellent book in the series that has set up a whole lot of epicness to continue – I was sorely tempted to reach for the next book the very second I finished this one; I can’t wait to see what happens next.