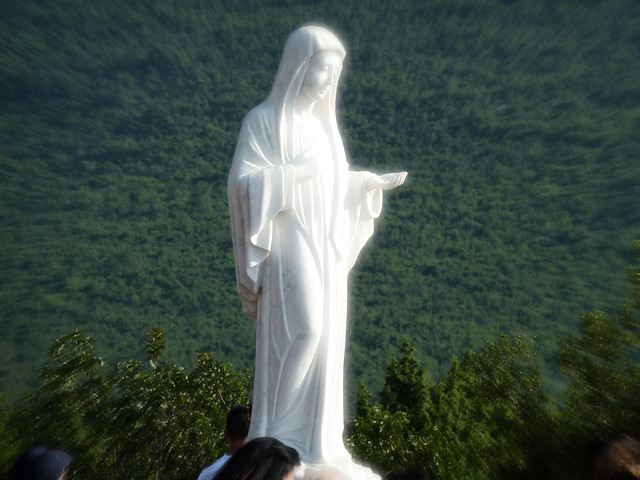 One of the most prevailing and damaging tropes to follow women is the Madonna/Whore complex. An age old method of both putting women on high, restrictive pedestals, wrapped in gilded cages to be babied and sheltered and incredibly controlled while also debasing women as acceptable targets and victims of abuse and violence; the Madonna/Whore complex has always been a short cut for judging whether a woman is “good” or “bad”.

In the media, we often see this in villains with the pernicious trope of evil female sexuality. Whether the wicked temptress, the immoral slut, the lusty jezebel or the simply evil sexual deviant - one of the quickest and laziest way the media has to depict a female villain as a villain is to make her sexual. Only a villainous woman seeks out sex, only an evil woman initiates sex and only the most depraved of the depraved of women are actually sexually experienced. Being sexual is all too often the female equivalent of Kicking the Puppy - a simple coded way to depict a villain as evil without bothering with any development. Even when not actively villainous, she is likely to be a Femme Fatale - the same coding applies, a sexual woman is dangerous.

When we come to our heroic protagonists, of course, the Madonnas trot out.

A lot of the time we go full on old school - and our protagonist has never ever had sex before. She is a virgin and probably quite disdainful of sex (and especially other women who are sexual) right until her (usually much more experienced male love interest) opens her to the many splendored joys of True Love Sex. In some extreme cases she will have never even had an orgasm before

Sookie Stackhouse from Charlaine Harris’s Southern Vampire Series is, of course, a classic example and she also introduces a common justification for deciding on a virginal protagonist - some kind of woo-woo that makes sex impossible, unpleasant or undesireable. Sookie’s ability to read her lovers’ minds makes her unwilling to be intimate (albeit something of a stretch) but her’s is not the only woo-woo barrier to sex. In Dark Lover, vampire biology makes Beth completely non-sexual - until her awakening when her true love turns up and leads to oceans of lust. Which is another element of this trope - their one true love will definitely have the correct mojo to unlock the woo-woo chastity belt. In a way, magic serves to preserve these women for their proper owners.

I’m far more intrigued at this point by a protagonist who has a woo-woo that makes their sex lives awkward - and works around it because they are sexual and are willing to take steps to realise their desires (even if those steps are not ideal), like Lire in the Clairvoyant’s Complicated Life Series.

Another excellent way to ensure properly intact good-girl hymens is, of course, historicals - Steampunk is full of virginal protagonists - such as The Gaslight Chronicles. We can have a world with magic, steam powered contrivances and weapons of all kinds - but sexual good women is apparently a step too far. Again, I appreciate when we have a subversion that actually explores the potential of speculative fiction - like the Immortal Empire Series.

Of course, while woo-woo makes a convenient justification (especially in Paranormal Romance), it’s not necessary and many protagonists just happen to be virginally pure for their true loves - Damali in the Vampire Huntress Legend Series, Clary in The Mortal Instruments and Mona from The Protector

Of course time has moved on and, in some circles at least, virginity is not seen as essential - but we have seen the rise of a kind of pseudo virginity that has been snarkily referred to as the Gently Used Protagonist. We first came across the term Gently Used Protagonist on the blog Karen Knows Best who in turn saw it on All About Romance. The Gently Used Heroine is a woman who has had sex - but only once. Twice at most (and certainly with no more than two men - and even two is pushing it). Usually she didn’t enjoy it, certainly wasn’t in love and often the man was a terrible person as well, just to make it clear that sex with anyone but her One True Love was a proper Mistake that she now deeply regrets.

In some ways it’s a kind of punishment for her straying off the one true path - her experience had to be miserable because she was breaking this moral code - and she couldn’t possibly have LIKED it and still be a good person.

It also somehow helps preserve this ridiculous idea of “purity”. She’s a little…”scuffed,” but she’s still pretty much like new for their male love interest. She isn’t REALLY “sullied” by her experience - as multiple sex partners or (horror of horrors) actually enjoying sex would taint her.

We see this most commonly in paranormal romance series - both the Black Dagger Brotherhood and Sherrilyn Kenyon’s Night Hunter Series are full of women who are either virgins or Gently Used. In Cold Iron Beth has had one miserable and outright criminal ex-husband - her only previous lover. Even Anita Blake was Gently Used when her series started, with only one lover in college who just dropped lots of angst on her.

To truly preserve her proper Madonna status, a lot of these protagonists both hate other women and frequently attack them for their sex lives. By degrading these “Whores,” their status as Madonnas is upheld. Sookie Stackhouse loathes just about every woman around her - and frequently attacks them for being or dressing in a manner Sookie considers unacceptably sexual (something even more common in some of Charlaine Harris’s other series). Anita Blake hates almost all women. Even without overt hatred, a more sexual or romance-orientated woman is often villainous, inept or otherwise inferior to the protagonist - like Jessamine in The Infernal Devices and Christie in Night Broken. By these lesser women being denigrated and reduced and certainly judged by the protagonist, often through their sexuality, the Madonna maintains her righteousness over the “Whores”

This is all juxtaposed with the sexually experienced male love interest. It is not only expected that the man will not be a virgin (subversions are extremely rare - such as A Nameless Witch) but an epic lover, capable of giving his partner multiple orgasams the first time that she has sex. While this set up frees the man to be sexually adventurous, it is also a form of rigid gender roles that is limiting. Just as a woman is more than her vagina, a man is more than his sexual prowess. Furthermore, this creates a form of power imbalance between the man and the woman, with the man always in the position of expert, guiding his virginal or gently used partner into sex.

In a genre that constantly refuses to accept the black and white of consent and non consent it romanticises a script in which the man has the right to coerce women into acts that she may not be comfortable with or ready for. Using this framework allows the woman to maintain the veneer of respectability because the sexual act was not initiated by her, even as it strips her of her sexual agency and bodily integrity. A lot of the time woo-woo is used to justify this - allowing the Madonna protagonist to have sex but she is forced by magic - the undertone is a very powerful “it’s not her fault” message - so we can forgive her for being sexual. Anita Blake and the Ardeur is a classic example, but we also have sex-addiction wine in Stone Song and Cassie in the Cassandra Palmer series. The model is that men seduce and women resist because of moral strictures and then are overruled by the more experienced man, who knows intrinsically that the woman’s use of the word no, is simply a ruse. This “justifies” a lot of dubious pressure through classic Paranormal Romance sexual assault and nagging such as The Black Dagger Brotherhood Series through to outright rape with Rhys from Meljean Brooks’, Iron Duke)

Through the sex act, he not only declares his prowess but claims the woman’s body as his to do with as he wills. And this language of possession is rife through the genre. If worse comes to worse he can ask the woman not to shower in his absence, so that other males will know that she belongs to him as Cooper did, in How to Flirt with a Naked Werewolf by Molly Harper. How many times have you read a male love interest refer to his female partner as his (Adam Hauptman, Jamie Fraser, all of the men in the Blackdagger Brotherhood series who also get to magically scent-brand their brides) - his property as though this is actually romantic. The male protagonist is emboldened in his claim because of the woman’s virginity, or limited experience, makes her available (read: no other man has staked his claim) reinforcing the idea that woman is not actually a person but an item to be claimed and used.

It is problematic of course that all women find pleasure from being penetrated and greatly ignores female anatomy. Sure, the man may flick the clitoris once or twice, but it is quickly ignored to get to the conquering (read: penetration).  PIV sex is the primary form of sexual congress, simply because it reinforces male headship and again, reminds us of the woman’s inexperience with her own body (let alone what she finds sexual pleasurable) and it turns the sex act into something a man performs on a woman, rather than a shared act of mutual pleasure.

This model further sets up a very hetrosexist understanding of sex, as strictly penis in vagina, leaving no room for the different ways in which humans couple to be understood as sexual, let alone sexually satisfying. Same sex interactions tend to fade to black rather quickly or simply don’t exist at all. GLBT people are decidedly asexual in this genre, when they do exist at all, leaving the sex up to the straight couples who adhere to the aforementioned essentialist  gender roles. Same sex activity would be too subversive to fit into the essentialist trope and that is one of the reasons why it tends to be erased. When they are not erased, these relationship are often clumsily gendered down these same stereotypical gender-roles which seem required.

Despite the fact that urban fantasy and steampunk are largely written by women, it’s clear to see that many problematic elements regarding female sexuality are continually included, proving that having a marginalised person as an author is not a guarantee that a portrayal will be good. It’s 2014 and not only are we still having to deal with the Madonna/Whore paradigm, as readers we are expected to internalise this as not only good but naturally occurring and even a necessity for romance.The entire thing is a construct which has no life other than what we give it and if even in our fantasy we cannot escape this misogynist and indeed heterosexist model of womanhood, how can we possibly move beyond it in the real world?