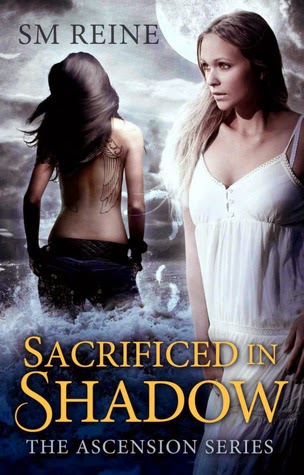 A lot has changed in Elise’s life and she still has a lot to learn about exactly what she is – but one thing there’s no doubt about id how powerful and dangerous she has become. Certainly she’s more than a match for a rogue werewolf which small-town deputy Lincoln Marshall believes is plaguing his home

But when she hears the list of victims she’s intrigued – because one is a girl from several years ago she failed to save. Someone is trying to lure her to this town and she means to find out who and why. And why they’re trying to frame the country’s last werewolf pack for murder.

This book had an impossible task. This is a brand new series but is taking the existing vast and rich world that all of S.M. Reine’s books take place in and it’s taking Elise as the protagonist – a character who has already been the centre of the Descent Series. Over the course of that series, a lot has happened to Elise – and that’s a massive understatement. Her experiences with angels, demons, in Hell and Heaven, with Adam and Eve and God and her best friend/ally/lover/guardian James and so much else are deep, complicated and incredibly involved. Elise has been through a lot that has created an extremely full and complicated character – especially in terms of her magic and just what she is; there’s such a lot there. On top of that there’s her complicated history with the multiple people in her life she has a lot of history with – and all that history is shown in their interactions.

So this highly developed character with this incredibly epic history had to be introduced/recapped along with a rich and huge world that had already been explored by multiple series all had to be fit into this one book along with a story… it was such a tall order that I put off reading this book, thinking I couldn’t tackle it until I’d finished the Descent Series and maybe some of the other series set in the same world. Yet it worked. This book is genuinely stand alone. I’m sure the other series will add to Elise’s backstory – but I haven’t finished the Descent Series and could still follow her rich backstory and understand all the complexities that go into making her her.

All of this world building and character development was fit into the book in a very natural and flowing fashion. I never felt there was a lot of convoluted infodumping, nor a lot of clumsy exposition, the pacing wasn’t bogged down by conveying all of this vast information but nor where there any holes that made it impossible to follow the story or Elise’s nature or the huge world we have here. And considering how much there is to squeeze in there, that is really really impressive; I’ve seen authors badly fail having to convey a tenth of the information.

On top of that the story is surprisingly involved. Again, it wouldn’t surprise me if the first book in a series was relatively simple in terms of plot in order to introduce the world and characters, but this plot was wonderfully twisty. We had a lot of action, a number of suspects a nice number of red herrings without getting convoluted and a completely surprise ending I didn’t see coming even though, as Elise pointed out, there are definitely more than enough clues there to follow it. All of this is told with pretty excellent pacing (perhaps the number of side plots at times makes me feel like Elise has somehow wandered off from what she’s actually supposed to be doing, but the side plots are still relevant, useful and interesting).

Needless to say after my lead in, the world building is excellent. There are a number of elements from the other series as well as the whole recent revelation of the supernatural (and the organisations designed to police it) being well built into the series. There are some comparisons with marginalised oppression, but it’s not depicted as marginalisation per se, so much as basic injustice and paranoid fear. It promises to be a rich and interesting element of the story especially when read with the other series told from the point of view of characters from those organisations.

The characterisation of Elise is amazing, she’s an excellent character and we can see how she has grown from the previous series, both in terms of power and compassion (again, you can see this growth without having to have read those series) But unlike so many strong female characters, she isn’t alone – there’s also Rylie the alpha of the werewolf pack. I think there’s a lot more to learn about her, but what we do see of her is fascinating – she’s strong, caring, capable yet (in a genre where being the most hard bitten cynic is a badge of honour) she’s also very hopeful. She’s an interesting choice as an Alpha and brings a whole new slant to the werewolf pack because of that – especially given both the paucity of female werewolves in the genre and how they are generally portrayed.

We also have a large number of POC characters. Seth and Abel are Black and are pretty hefty characters in the book – also, avoiding spoilers, given their nature and who they are I like that they are Black. One of Elise’s partner and ex, Anthony (who has a very long history with her) is Latino, he doesn’t play a huge role in this book but he’s there and is clearly a staple of the series. Nashriel, the angel, is Middle Eastern and there are several minor characters who are POC.

There are no LGBT characters in this book – Rylie mentions a female same-sex couple as her aunts but they’re not present in the book and I don’t rate Gay Maris as inclusion. The only other mention of LGBT people are pretty horrendous slurs, both at the lead in to this book (and for no apparent reason at all) and because Elise’s other companion, McIntyre for some reason has a liking for that same slur, along with what I believe is an derogatory term for latinos. We also have depictions of sex workers that seem to come straight out of a bag of the worst stereotypes – worn, sore-ridden, etc.  I don’t see how any of this added to any characterisation – and certainly none of it was challenged.

It’s a shame because it’s the one reservation I have about the book.

This book is epic, has an epic world and some really epic characters. It has an action packed, sneaky plot that is well worth reading and is written in an excellent style that both conveys the vast amount of information and keeps it charging forward – an all round excellent book.