Shining in Crimson (Empire of Blood #1) by Robert S. Wilson 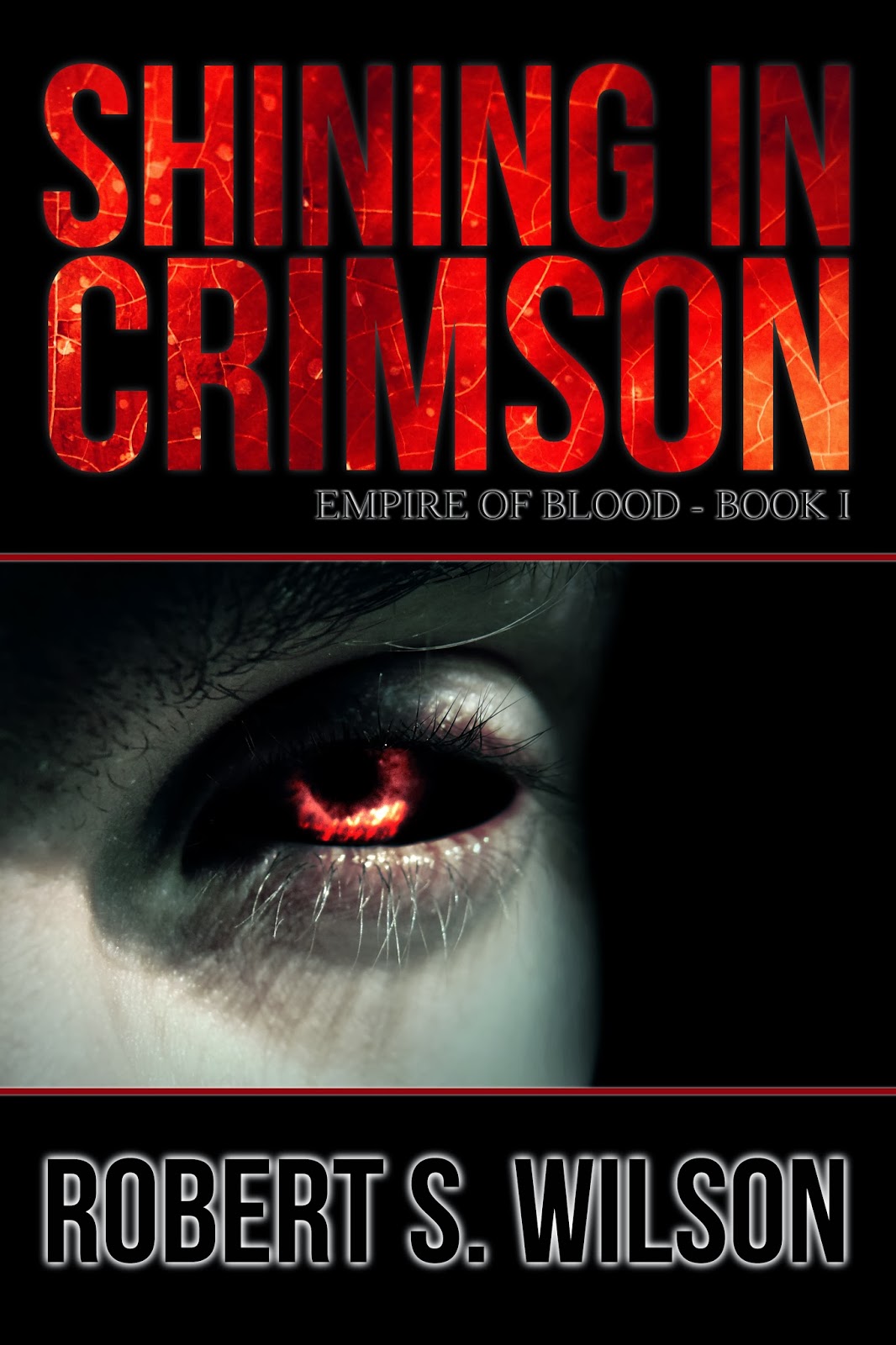 In Wilson's dystopian world, the United States is no more and its place the American Empire rules the people.  It is a theocracy ruled over by an emperor.  The people are forced to live under strict morality laws and those who refuse to conform are sent to Necropolis the former Las Vegas and now home to a population of vampires.  Hank Evan is sent to Necropolis as punishment for procuring a prostitute and he is determined to survive somehow because he is all that his son Toby has yet.  What Hank does not realise is that surviving this night will cost him so much more than he ever imagined.

As an introduction to a trilogy, Shining in Crimson was not bad.  Wilson gave us a sense of the dystopian world and its divisions.  I would have liked to know more about how the American Empire came to be and more specifically how the truce with the vampires came into existence.  We start the novel learning that the war has now been over for 20 years and that the government uses religious propaganda to prop up its rules, along with a fear that the alternative is to become prey to the sinning vampires.

The POV constantly changes throughout the book and though I normally find this irritating, it helped to bring the different elements of the story together.  I found it interesting to see vampires who based on their long lives understand better than the humans, exactly what the American Empire is all about.  For safety, the humans have traded their liberty.  Hank has vague memories of a time when the world was different and a father who fought and died for the United States.  He is tormented by the horrible bargain he is forced to make.  Then we have Simon a devout member of the Empire, to the point that he even thinks of his own mother as a whore, finally coming to grips with the fact that he has been sold a book of lies and finally, Ishan who is determined to hold his vampire council together and bring down the empire.

The majority of the characters in this book are male.  The only three female characters of note are Simon's mother, who viscously slut shamed.  When she is raped by Peter, Simon is horrified and yet when Peter says that you cannot rape the willing, Simon is quick to agree.  It is because of her dress and the fact that she didn't physically fight back and instead begged for her son's safety that Simon refuses to see her as the victim that she is.  It is only after gaining empathy from Ishan, that Peter begins to understand he may have potentially wronged his mother.  The second female character is the human vampire Rachel.  As with Simon's mother, she is also a rape victim.  Each day she is subject to rape and beatings by her father and her brothers, which she endures until Peter kills them.  In turn, after being judged worthy, Rachel becomes a vampire, only to rape Hank in a bid to help Peter become the leader of the vampires.  There is also Grace, the dead wife of Hank.  Years later he is still mourning her loss.  Grace is really little more than a footnote in this story. Finally, we have the Queen of the Ancients, the only ancient vampire to be sentient.  We don't really learn much about her beyond this.


As you can see, we have one female character who is promoted to obscurity and two others who largely exist as victims of sexual violence and Grace whose death provides angst for the male characters. These characters are never really developed beyond their victimhood.  Turning Rachel from victim to predator given that Simon's first reaction to Rachel is to shame her for his sexual attraction to her does not develop her whatsoever and instead is more to position Simon's frame of reference.  Shining in Crimson doesn't so much have female characters, as it does cardboard cut outs who are either fridged for male angst or victims for male judgment.

The third rape victim in this book is Frank, who is raped by Rachel.  Male rape is something that is rarely portrayed in the media and when it does appear, the rape is either denied, or the victim is presented as being lucky to have been violated.  Wilson took care to show the horror of what happened to Hank and in the wake of the assault, Hank continued to act like the victim of sexual assault that he is.  This is a rare portrayal.


Her hands pressed down onto his chest as she took him into herself. Immediately the phrase "You can't rape the willing" came to mind, reminding him of the typical stereotype that men could not be truly raped. But here he was... being raped. She began to rock up and down on him. It was exhilarating and horrifying all at once. She screamed his name in Diana's voice, sending chills down his spine and chilling his heart as well. She ripped at the flesh on his chest with her fingernails and began licking the blood from them. All the while, he got closer and closer. And then as his face tightened in ecstasy and revulsion as his body went into orgasm, she leaned forward, offering the now-dry blood on her chest to him. He licked it at once, while still in mid-climax. Suddenly all of his sensations were heightened and he found himself convulsing with euphoria and hatred. In that moment, he became mentally void. When it finally ended, his body relaxed and reality came back to him. (pg 133-134)

While I think that what happened to Frank is rarely portrayed in the media, it would absolutely fair to say that Shining in Crimson was filled with gratuitous rape. The assaults really didn't add anything to the story and certainly did not really serve to develop the characters whatsoever.

In terms of GLBT characters, Shining in Crimson is erased. We are told of one GLBT character who was brutally murdered, the moment he told his best friend about his sexuality. "Thompson would gladly be drained of every drop of blood by the most gruesome of beasts than have a faggot for a best friend."  Instead of actual GLBT characters, Wilson had Toby experience homophobia. Toby was constantly being targeted by the other boys at the orphanage and routinely called "f@ggot"


"Aw, does the little boy not want to talk about his piece-of-shit, blaspheming father? What's the matter, Toby, Daddy not like you because you're a faggot? " (pg 42-42)

At every turn Toby was threatened by the boys based on their determination of his sexuality.

The problem of course is that all we ever see is Toby experience homophobia with no declaration or any act which would suggest what his actual sexuality.  It is perfectly understandable to see homophobia in Christian theocracy but it is never really challenged within the story itself, nor are there any clear gay characters who actively resist.

There are several characters of colour in this book.  The Indian human vampire Ishan by far is the most prominent.  We are given the opportunity to briefly visit Ishan's storied history giving us not only a great sense of his age but of his culture and heritage.  Ishan is a leader and willing to fight for what he believes is right.  Unlike the other human vampires, Ishan has not lost touch with his former humanity and he is filled with empathy; however, said empathy thankfully never descends into bemoaning his vampire nature.  Other characters included  the brothers Kato and Isingoma, as well as Stanislov.  These characters were really minor characters in the story; however, there is plenty of room for Isingoma to grow in significance as Ishan rebuilds the vampire council.

The premise of Shining in Crimson is really unique but Wilson failed to live up to it.  At times it felt like there was far too much going on, making the book feel scattered.  I wanted to know more about Ishan's plans and why Hank is so significant.  I wanted to know how the council came into being and more about the war.  In the rush to fill the story with action (read: sexual violence), there were huge holes in the plot leaving me as a reader with many unanswered questions.  I will however say that my curiosity has been peaked and I hope that Wilson addresses these issues in the second book in this series.

Editor's note: A copy of this book was received from the author for review.
Posted by Renee at 3:00 PM