The Librarian Quest for the Spear 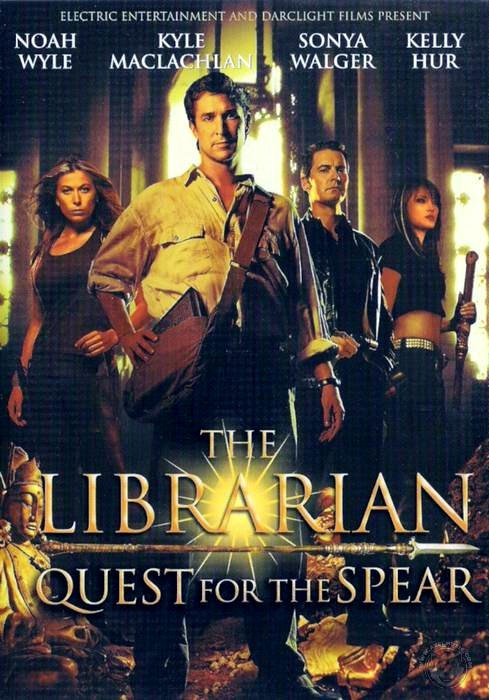 Flynn is a geeks geek.  Still in his 30's and in college, as well as living with his mother, it would be fair to say that Flynn is a classic case of failure to launch.  It is only when Flynn's professor looks up his records and discovers he has 22 degrees and decides to boot him from the class, that Flynn is faced to acknowledge that there is a life outside of academia.  Flynn finds an invitation to apply for the role of a librarian and after proving that he can read people as well as Sherlock Holmes, Flynn is given the job. Flynn quickly realises that at this library, he will be forced to do more than catalog books because within its archives, the library contains singular wonders like Pandora's Box, Excalibur and the Arc of the Covenant.

Flynn doesn't get to settle into his new role, as on his first day, the library is robbed of part of the Speak of Destiny.  Flynn is tasked to retrieve the last two pieces to ensure that spear is not made whole again, to avoid a disaster.  Having never done anything beyond study, Flynn knows that he's over his head but since the world is at stake and he is now the librarian, he has no choice but to attempt, even if trying may well mean his death.

The Librarian Quest for the Spear is a typical White man saves the world, semi action flick.  The small shift in this movie is the character of Nicole Noone, who partners with Flynn on this journey.  Flynn is without doubt the brains of the operation, being able to quickly decipher cryptic clues; however, Nicole is without doubt the brawn.  Nicole saves Flynn's life on several occasions.  She is a woman of action and though extremely guarded, is unafraid to face danger.  This was quite subversive, given that movies in this genre, like The Indiana Jones series, not only casts Jones as the expert, there is always a damsel in distress that needs saving.  We learn very little about Nicole, beyond what Flynn is able to surmise, making her in many ways little more than a female weapon.

Other female characters include Margie Carsen, Flynn's mother, Charlene, the caretaker of the library, and finally,  Lana.  Margie spends much of her on screen time obsessing about the fact that Flynn does not have a girlfriend.  Margie invites a young woman to the house to meet Flynn and even resorts to imploring strange women at a café to give her nerdy son a second look.  Margie is the concerned mother to the T and beyond that, we learn nothing else about her.  Charlene is the stern caretaker of the library and she is not in the least bit impressed by Flynn. We learn nothing about Charlene as a person, beyond the fact that she does not like to be touched, though there is a hint of sarcasm blending with her salty demeanor. Finally, we come to Lana, one of only two women of colour in the movie.  Lana is an ass kicking woman, who essentially is the sidekick to the evil librarian Edward Wilde.  We don't learn anything about Lana's motivations and just as Nicole is the heavy for team good guy, Lana is the heavy for team bad guy. Quite preposterously, Lana ends up with a crush on Flynn, so of course the two women have to fight it out.  Heaven forbid each of them remember that the fate of the world is at stake.

There were very few people of colour in this movie, as aforementioned, Lana is  one of two WOC and the other is Nicole, who is half Argentinian and does not speak any Spanish. This is a real shame, as Sonya Walger, who plays Nicole, is really half Argentinian and does indeed speak Spanish. It would have been nice to see Nicole speak Spanish, as it would have grounded her character as a WOC. Other than being told of Nicole's background, there are no other cultural markers to her character. In the rest of movie, people of colour are little more than bit characters to help the protagonist along on his journey.  There is a Portuguese speaking tribe in the middle of the Amazon and a temple filled with Buddhist monks in Shangri-La.  These scenes were additives at best and turned these cultures into something to be raided - even stared at for their difference.

GLBT didn't fare any better than women and POC because they were completely erased in The Librarian Quest for the Spear. This movie was made in 2004, leaving absolutely no excuse for the erasure.  Somehow, the writers managed to have a love triangle between Flynn, Lana and Nicole, as well as set up Nicole up to be spurned by her former lover but could not see fit to include a single GLBT character.

On the plus side, The Librarian Quest for the Spear did have Bob Newhart, who played Judson.  Newhart was actually 79 when this film was released. Judson essentially was comic relief / wise mentor and his role was filled with awkward as well as classic Bob Newhart silences and facial expressions.  It was quite subversive to have Judson show up as the cavalry and even kick a little ass, as the astonished Flynn looked on.  Without a doubt, Bob Newhart was the best part of this movie.

For what it's worth, The Librarian Quest for the Spear is little more than an Indian Jones spoof, with a touch of Sherlock Holmes tossed in for seasoning.  It is at times outright absurd with moment of comedy to carry the lightness of the movie.  We are meant to laugh at Flynn's awkward nerdiness and sympathise with him over his meddling mother.  We are meant to feel empathy with Nicole, when she is exasperated by Flynn's lack of expertise.  The problem is that while the premise of the movie is great, it gets a rather juvenile treatment, making it a better fit for a young adult than an adult.  To that end, I had difficulty at times maintaining interest in the film as it progressed and when it reached its all too predictable ending, I was glad that it was over.  To be fair to The Librarian Quest for the Spear, spoofs have never been a genre I have particularly enjoyed and perhaps if the movie had tried to be a little more serious, I might not have struggled to give it my undivided attention.