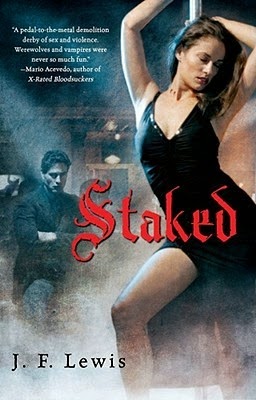 Eric isn’t the most competent vampire around. Because he was embalmed, he has issues with his memory and forgets little things – like when the sun is coming up. He also has his temper black-outs which has led to the odd unfortunate massacre that’s always awkward. He also has pretty bad impulse control issues

Hence him turning new girlfriend Tabitha into a vampire. Something he’s done before and it never ever ever works out.

And he’s annoyed the werewolves. He’s not even entirely sure why, but his constant attempts to mollify them keep going rather awry and escalating the problem and he can’t even be sure if someone is acting against him or if he’s just completing his streak of colossal screw ups

I really like the world setting here – it’s one of the best depictions of grittiness I’ve seen, because it doesn’t come with the over-the-top grimdark that is usually so common. It’s gritty, yet light hearted, there’s a strong sense of darkness but characters who are still just a bit silly.

I like the world building, l we’re taking some of the very common elements of Urban fantasy – werewolves and vampires but there’s such an original twist on these so very well established themes. The degrees of the vampire power, they way they run the city, the different routes to becoming a vampire and also the very biology of vampires. A lot of books talk about vampires being dead and even bloody tears, but this takes it to the obvious conclusion – and it’s really not all that sexy (unless you have a thing for cold bodies with blood for every bodily fluid). I have to say I love this true analysis. Even more we have some actual attention paid to age gaps, I loved Marilyn outright telling someone that they’re treating Eric like a lovesick teenager when he’s an 80-odd year old man.

But it’s not just the vampires – the whole holy werewolves is definitely an original twist which I didn’t expect. I’ve read a lot of this genre and seeing these old staples spun in entirely new ways is excellent to see.

Then plot was also nicely twisty – Eric finds himself in a war with the werewolves and we’re not entirely sure why. I mean, there’s a very good chance it could be from his own incompetence (Eric being Eric) but we find more and more levels beyond that, and lots of little hints that turn into more as the story develops. It had a few tangents, but in general the book kept me hooked throughout

In terms of plot and world building, this book is a winner. Almost. I still think the main antagonist hasn’t quite thought out his plot or how he’s going to get away with all this without consequences, but compared to everyone else in this book he’s a positive mastermind

I’m not as much of a fan of Eric, the main character, especially early in the book despite generally liking his tone (as a Vlad, an upper-echelon vampire, he’s pretty unkillable and can be pretty blasé as a result). In fact, I dislike him sufficiently to derail a lot of my enjoyment. Eric is a screw up, he knows this, he almost openly embraces it and he frequently castigates himself for screwing things up. And some of the screw ups I wouldn’t mind because they’re natural parts of his odd vampiric biology – he has constant memory lapses and rage-based black outs (which are very very bad because Eric is a very very powerful vampire indeed. It’s quite hard to be as mellow and generally inoffensive as Eric when you keep waking from black outs surrounded by torn up corpses). I could get by with a character with these traits as his frustration with them and attempts to work around them can be endearing elements. But that is compounded by some truly appalling decision making. He turns Tabitha into a vampire for the utterly worst of reasons and then makes no real effort to help her transition. She has sex with another character and it’s such an utterly bad idea that I was literally fighting not to yell at the book. He ignores his problems, he very much has to be forced to act and there are far too many times when he just seems to ignored the various things boiling around him.

I’m also not quite sure of the character. I would say he’s a special male kind of Gary Stu – he not only has the classic super-special-powers-of-specialness that any Mary Sue has, but he also has that classic bro-incompetence shit going on you see in a lot of buddy movies; yet despite his epic incompetence, he’s just has so much awesome woo-woo that he gets out of it. It's kind of like the inept stoner dude from every buddy-movie became superman.

What I will say is to hang in there because the book does manage to scrape up something. In the beginning of this book the flaws with Eric annoyed me a lot and were a real barrier to me actually enjoying this book. But as the book develops we see more of the meat and motivation behind his random and ill-advised acts and we get some justification to some of his more unpleasant, ridiculous and generally frustrating behaviour. It doesn't make it more readable but an attempt to explain the awful was made/ It also helps that Tabitha becomes a much more realised character with her own agency and power. Tabitha’s experiences and viewpoint also reveals some of the pressures a vampire has from their own instincts. Of course, it doesn't help that Tabitha is a pretty terrible character who is eclipsed only by Eric in his awfulness (really, Eric helps all of the characters in this book by being so objectionable that they see decent in comparison).

I won’t say they fix the issues, Eric still annoys me a lot (even if he amuses me at time) and Tabitha is still deeply flawed (albeit in a very human way) but it does mean I could see ELEMENTS of this book I actually liked rather than just loathing the whole thing and giving up

The way many of the women are referred to is dubious – Eric sexualises or infantilises just about every woman but Marilyn and he has a severe case of Madonna/Whore going on with Candice, one of the strippers who works for him and regards the others – including Tabitha – with pretty withering contempt (he refers to Tabitha as a “moist tightness with all the necessary parts”). I also am very uncomfortable by Eric, when hungry, was proud that he only killed a woman feeding off her not “more”. The implication, albeit not the overt description, is that a hungry vampire may rape.

The flip side is these women aren’t all completely terrible characters (or no more so than every character in this book. Marilyn is clearly tough and capable (perhaps the only character who is). Rachel happily runs rings around every guy around her (which isn’t saying much)…

Then there’s Tabitha who has surprising character growth with her own power and goals which did surprise me. The negative is that they’re not great goals since she obsesses over Eric who is so very not worth it. Dump him Tabby and go for Lord Phillip, she’s obsessed with his height and weight but he treats her like a person. In fact, I would say that Tabitha is a ridiculously foolish character except this book contains Eric who kind lets whole new records for ridiculous foolishness. Her star moment is actually leaving Eric to make him chase after her – and she does this by telling the big bad who has literally just told her his plan to kill Eric. She leaves fully expecting her message to be delivered and… I don’t know, Eric’s ghost rushing after her to ask her to come back?

That leaves Greta who needs an awful lot of rescuing for someone who is supposed to be so powerful. I’m also leery about the vague references to Greta’s “eating distorder” which appears to mean she kills and eats a lot of people – it’s only a couple of references but I suspect it presages bad things to come.

In terms of POC we have Talbot, bouncer (since Black male bouncer is on some kind of checklist for any story with a strip club. I don’t care if the strip club is in the middle some Aryan nation camp, they will have a big, bald, Black bouncer) and miscellaneous cat monster. I think he has history and depth and his own motivations – and I hope they show up in other books. Because in this book he’s Tabitha’s babysitter and all that potential is poked with a very long pole, but he’s still her babysitter. And not a very good babysitter – she constantly runs off doing-not-very-sensible things and trying to figure out this whole undead thing largely by herself (probably because she zones out when things are explained to her and concentrates instead on getting guys to look at her breasts). I don’t remember any other POC in any significant roles (there are a couple of others mentioned but we don’t see them) and there are no LGBT people though there is some homophobic taunting thrown around.

In the end I find myself immensely annoyed by this book. Because in terms of world setting and plot I want very very much to love this book. But then the characters come along and I’d happily mow them into teeny tiny pieces with a chainsaw. The only reason Eric isn’t dead 10 times over from his own inability to find his own arse with both hands and an atlas is that he’s effectively invulnerable (he’s a vampire who consistently fails to keep track of dawn, for example.) The only advantage of Eric having the intelligence of ice-cream is that it hides just how utterly mindless everyone else is as well. There’s the bones of a decent world there, but every character needs to have a sharp word with themselves and sort their life out.