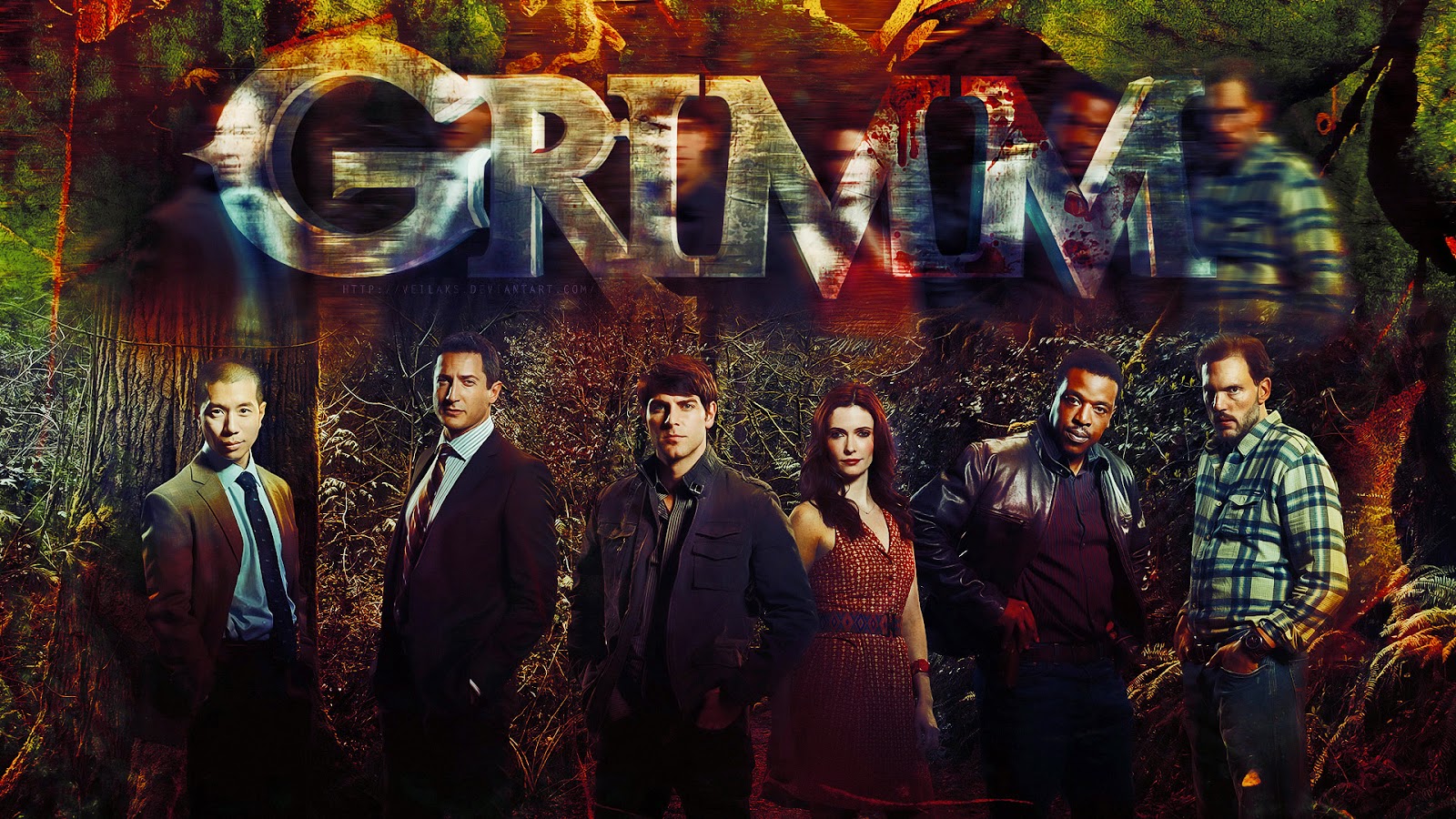 “No-one is so thoroughly superstitious as the godless man.”

Juliette has revealed her Hexenbiest face to Nick and he… pulls a gun. He think she’s Adalind in disguise (and showing a Hexenbiest face? That would be the worst disguise ever). Juliette hastily tells him things Adalind would never know. Nick steps back in shock and Juliette gives a run down of how awesomely badass she’s become (in a sad voice though). She adds that it’s permanent because that’s what Henrietta said

Which, eventually, tells Nick that Juliette told Renard before she told Nick. Nick can’t understand why she wouldn’t tell him – and she confesses she was afraid he would kill her. Like me, every other viewer on this show and probably people on the planet Zog, Nick is stunned that Juliette would think that even for a second. Nick has a massive guilt spiral, blames it all on himself for becoming a Grimm again and leaves, not knowing where he’s going

Ok I get leaving a situation you can’t handle, I do it all the time – but when the situation is someone else’s painful issue, leaving is 8 kinds of arseholery.

On to this week’s monster. A happy domestic scene has a teenager sneaking out to be with his girlfriend in the woods at night. These kids needs to watch more horror movies, especially when they split up just before creepy accordion music plays – and a wolf-man appears with a big hammer. The boy turns into a rabbit-man; this does not look like a fair fight. The kid gets his foot squished as his mother arrives screaming for help

The phone call for the investigation at least distracts Nick from his wrestling Juliette thoughts as he, Hank and Wu all gather at the crime scene. The kid, Peter, has died from losing his foot. Interviewing the mother shows she’s a rabbit-wesen but she doesn’t notice Nick’s grimmyness.

Elsewhere, a couple buys that severed rabbit-wesen foot from the man who killed Peter and he returns to his creepy accordion music. They believe the foot will help them conceive.

Nick and Juliette’s family issues continue, Nick not sleeping in the same bed that night (claiming he didn’t want to wake her – and, yet again, I have to question why this huge house only has one bedroom. Where did Truble sleep?). Nick demands to see Henrietta, alone. That is so not a good idea.

He goes to see Henrietta and points out that the blood of the Grimm does actually destroy Hexenbiestness – he’s done it before (hey the show writers did (remember that!) but because of Juliette’s specialness, that won’t work. Henrietta gives Nick two choices – accept Juliette as a Hexenbiest, as she accepted him being a Grimm, or kill her. I would like to point out option 3: leave her and both of you go your separate ways. She also advises him keeping his distance while Juliette gains her powers. She proves this by magically seducing Nick, briefly, and almost kissing him as a warning for how powerful Hexenbiests are – and how much more powerful Juliette will become.

At work, Nick is all tense and edgy. On the crime they make the connection to another murder, a rabbit wesen and a missing foot to come up with lucky rabbit’s foot. To the Grimm Trailer (with lots of Wu’s geeky love of the place) share they fine the name of the rabbit wesen (Williehara) and the fact that severed feet aids conception. And that the Luporum Venators hunt them

They go to see Rosalie and Monroe and Rosalie is positively incensed that Williehara are still being hunted and have to hide from other Wesen. They do set Hank and Nick on the idea of illegal Wesen fertility clinics (legal wesen fertility doctors are apparently common, but the foot hacking thing certainly isn’t). Rosalie volunteers her and Monroe to pose as a wesen couple with fertility issues because Rosalie is so furious about the hunting.

To the clinic, where Monroe and Rosalie are very very cute (of course) but the doctor adamantly refuses to arrange severed rabbits’ feet which he considers appalling – his nurse, however, is willing. For $10,000 - $15,000 to move them up the list. Nick tells them not to let the nurse leave – so Rosalie knocks her out. Rosalie isn’t playing

Peter’s mother and sister decide to run, something they’ve had to do a lot before. Unfortunately they’re tracked and Chloe, his sister, is kidnapped next. Nick arrives and tells her he knows all the secrets and for once we have a wesen who is not terrified of a Grimm – probably because other wesen have hunted them for so long.

The hunter has Chloe but needs her to woge before he can cut off her foot. Nick and Hank arrive so the end up chasing and fighting through the wood. Very satisfyingly, it’s Chloe who ends up beating him to the ground with a metal pipe before Hank shoots him with a shotgun.

Problem solved back to Nick family drama – Nick promises Juliette he will make it right. Juliette is leery about how Nick seems to be pulling away and Nick says that she learned to understand him; so he’s going to do the same for her. He promises not to leave, but he turns away when she woges – she demands he looks at her and kisses her while woged. He won’t – and she walks off.

Adalind, meanwhile, is following her own plans and arranges to run into Renard – she knows Victor will dump her as soon as he has Diana. She’s also trying to find out exactly what happened with Nick and Juliette since she was expecting two normal humans and instead ran into uber-Hexebiest. She makes an appeal to Renard joining her because they simply must be on the same side for the sake of their baby! Renard is impressed by her skills but not buying it.

She also goes storming to Henrietta to demand to know why Juliette’s so good – but a new secret takes precedence. Adalind is pregnant. And the only man she’s slept with is Nick… Adalind is not thrilled by this news.

One thing I liked somewhat is Rosalie’s anger here. So often we see Monroe and Rosalie being treated like a resource for Nick to use – something that as only partially countered with the trainwreck of the last few episodes when Monroe was kidnapped. Here, at least, while they are being treated as a resource, Roasalie’s own attitudes make it clear she wants to be involved, she wants to help and she even pushes forward to help without being asked. By making the case something she is passionate about, it helps dispel some of the idea she is being used again because this is something she wants independently.

Nick and Juliette… ok, it’s awkward and painful but it’s not nearly as awful as I expected. Nick doesn’t hate or fear Juliette. And she isn’t blaming him or attacking him. Those were the worst case scenarios. We do have a painful situation but it’s a much more real one – Nick has been repeatedly attacked, manipulated and nearly destroyed by Hexenbiest – if there can be said to be one long running enemy in this series then it has to be Adalind. A reflexive flinch around them is to be expected – and that’s aside from the aesthetic issues. At the same time, if this is Juliette forever then she has every reason to be hurt by Nick being unable to even look at her – the man who she loves cannot see anything but a Hexenbiest. It’s a deeply painful and difficult situation that is going to take a long time to unknot. Now we have to see where that’s going to lead.

I would also like Adalind to come around at some point and say “screw it, being a Hexenbiest is AWESOME!”