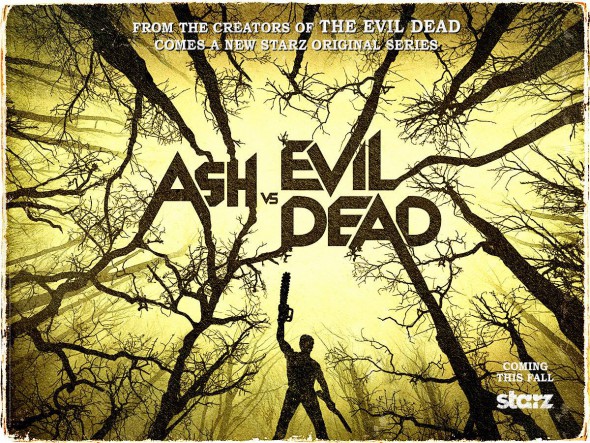 There was absolutely no way we couldn’t cover this show, drawing on one of the most iconic zombie film series of all times. I expect very little sense, very little coherence, and a whole lot of chainsaws.

And apparently a man putting on a girdle in a trailer before heading out on what I will optimistically call a “date.” He also attaches a false hand over his stump. Yes, this is Ash – and the same actor that appeared in the original films, so rather older now.

He goes to a bar and tries to be cool, picking up a woman for sex in the toilets. Including him needing a breather half way through. It’s campy, over the top and rather classically sets the tone for the whole episode. When his partner turns all demonic and yells “they’re coming for you” (yes this riffs of “coming”. Of course it does). The woman is surprised he stopped and turned back to normal. He briefly worries about something happening that hasn’t happened in 30 years – the evil dead – before they finish having sex.

Tone has been set – but not badly, it got a laugh, I admit.

Move to some police checking a house where they had reports of a woman screaming for her life. It is now ominously silent. I know the police don’t have the option – but I’d turn around and run right there – sorry lady, you’re on your own. Alas, Detective Amanda Fisher and her partner are braver than I and Amanda finds a body of a woman who died in terror. Even worse, John her partner finds a rocking chair that rocks by itself.

I would be out of there so fast the monsters chasing me would be stunned by the sonic boom.

They find a woman – the same woman Ash tried to impress with his evil poetry – and she twists her head around backwards to go all evil dead on them. She runs at them backwards in the most ridiculously comic zombie attack ever followed by a bloody and nasty gory fight with scissors and a shotgun. And John is killed by the antlers on the wall. As you would expect, there is spouting gore everywhere. John’s body disappears but there’s still lots of ominous noises… John’s body is running across the ceiling. Yes, the ceiling. I have no idea why things running across the ceiling is ultra creepy, it just is.

Really, Amanda, I don’t care if he is your partner there are windows right behind you – run!

There’s another quite terrifying fight in the flickering light and she blows off his head.

Back to Ash who realises he does have to do something about the mess and he plans to get his book translated – even as his neighbours are all ominous and possessed. He goes into work with a boss who doesn’t like him and rather standard ineptitude. His boss hates him (and throws out the word r*tard which, no it isn’t ok for him to says despite his gardener), but his co-worker Pablo who worships him and apparently continually supports him in his slacking. He also takes the time to creepily flirt with a new colleague, Kelly, who treats him with the contempt he deserves

Ash now gets to face violent dolls in his workplace’s warehouse. I have no words. How do you fail to make animate dolls creepy? Thankfully Pablo is there with a shovel – and is now in on the secret. Ash also gives us the history of him finding he evil book with excepts from the films (which I will be convincing Renee to watch and review soon – everyone go to the comments section to encourage her :P). Which is why he is running – but Pablo has decided Ash is “el Jefe” ad destined to save them all. Ash opts out of that and tries to flee in all the ominous weather. While he’s gone, Kelly gets a message from her dad that her dead mother has come home.

Pablo gives her a lift home while something unseen and ominous kills the awful boss. Pablo takes them to Ash’s trailer. Time for another ominous evil dead attack and the time for Ash to fight the evil or run from it – and he fights with an improbably thrown axe and then some awesome fighting moves from nowhere. Yes, it amused me – especially when he had to pause to get his breath back. Kelly begs him to save her dad but Ash is focused on the book

And Ash gets his chainsaw hand back – and kills his possessed neighbour with it.

In the aftermath of John’s death, Amanda is shunned by her fellow cops, accused of murdering her partner and generally not in a good place. She’s also still seeing people with random Evil Dead faces. Another woman, Ruby, tells her randomly to trust what she seems before leaving. Since Ruby is Lucy Lawless, she should naturally trust everything she says.

She returns to the building where it all happened (ooooh why would you do that?!) and finds evidence that it really did happen as she thought it did.

It’s cheesey horror that doesn’t even begin to take itself seriously – and this is set up from the very beginning with the aging Ash’s sexual exploits (and taking the time to finish even after a horrific revelation).

Sometimes you throw out the sense and laugh – he summoned the evil dead trying to impress a woman while high? Yup, we’re going there and, yes, I laughed. It is what it is, gory, silly and kind of hilarious – run with it and embrace your inner 14 year old.

It’s cheesey, it’ silly and it’s not meant to be taken seriously. And I won’t. But this is where I also have to say (anticipating the inevitable push back) that not taking it seriously doesn’t mean not commenting on social justice issues – because being cheesey and silly isn’t an excuse for (or a reason for) perpetuating bigotry or problematic issues (no, humour is not an excuse). And, yes, I will still be talking about inclusion – because inclusion means inclusion everywhere. Minorities like their cheesey, mindless fluff as well! We also want to be part of the silliness! We don’t want to only see ourselves in the Serious Shows of Emotional Drama and Deep Issues!

On that front, well it’s early to say much on inclusion since shows can change a lot from their first episodes. We do have Amanda (a Black woman) and Pablo (a Latino immigrant who is servile and fawning and I think is going to get on my last nerve). Ash is, clearly, several kinds of unpleasant when it comes to women but I also think the show does expose that (when, for example, Kelly slams him to the desk I think we’re fully expected to believe Ash deserved that).

And though it’s used for comedy, yes it is different to have a protagonist who is older, unfit and has false teeth (I like that they used the same actor but I think you’ll have to take this franchise out of Bruce Campbell’s cold dead hands). And disabled at that.