Massachusetts, a haunted B&B, terrible music (and a reference to the awful Ghost-facers) and people who are just begging to be murdered. Chop chop, wish granted

They arrive and book themselves into the crime scene room – and the learn that the dead guy was a descendant of the original Bordens. Dean also faces the horror of chintz – CHINTZ EVERYWHERE.

Lots of snooping follows and both Dean and Sam find numerous fake gadgetry designed to create all kinds of spookiness. Dean puts it all down to a tourist trap. Though there was someone taking photos with an old-timey camera who ran when Dean saw him

Except the owner of the inn is then brutally murdered as well. Time for Sam and Dean to impersonate federal agents. The local police do say the guy taking photos was Lem, a ghost fanatic but basically harmless

Another crime scene not in the area also drags them in – Sam goes to play FBI agent only to find the bereaved wife very hostile to him. Sam finds this odd, but the local police (reasonably) accept that loss makes people act oddly.

Dean’s interview with Lem basically reveals someone with a rather unhealthy obsession with Lizzie Borden, but, yes kind of harmless. Until he finds a symbol for the Darkness in his house. He ran into Amarra at the Borden house – and tells Dean that Amarra has aged to 12 years old. She also ate his soul – but didn’t kill him. It has left him slightly bereft, uninterested in just about everything, including his previous obsession. He’s desperate for Amarra to fix him – he no longer feels anything, he only imitates how he should act.

Dean realises this is soul eating – having remembered Sam all soulless. Dean also thinks they can’t kill Lem until he shows it’s dangerous – which concerns Sam because they’re supposed to be saving people. Not killing them. Bad Dean. Though they do have a brief debate of why Lem doesn’t become a vicious killer like Sam did when he had no soul – and Dean nominates Sam to deliver the bad news. Sam asks why him. I ask why he asks this question – seriously would anyone in the world ever want Dean to deliver bad news? Ever?

Sam also thinks aggressive bereaved wife may also be soulless. They go looking for her, Dawn, while taking Lem around with them driving them up the wall by describing how much he doesn’t care about anything – after a while of him getting on Dean’s last nerve and Lem worrying about the dark thing inside of him hatching, Dean cuffs him and brutally tells him he doesn’t have a soul. Because Dean has no tact and limited patience. Sam makes this face at him… 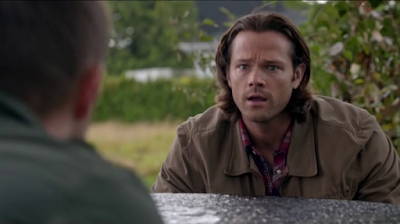 When, really, he should know better by now. At least Lem is happy to know.

They track down Dawn to a house the babysitter, Sidney told them about. And find bodies – it’s Sidney whose the real killer and she manages to take them both both surprise and capture them. Honestly Winchesters, that’s just sloppy when non-combat trained humans can take you hostage?

Anyway, it turns out Sidney rant into Amarra in a bar – and naturally worried about the apparent 12 year old out by herself. She also used woo-woo to make her super duper happy, before snacking on her soul after she was compared to an angel (she hates angels). Sidney likes having her soul drained – she had abusive parents and not having a soul, not feeling, is a relief for her to deal with her memories and scars. She’s also taken to murdering because has absolutely no regrets or hesitation or conscience – she’s killing people if she has a reason to dislike them and no reason not to kill them.

Sam and Dean make their predictable escape – but unpredictably it’s Lem who kills her with an axe while Sidney says creepy things about the darkness as she dies. He got out of the handcuffs, ripping off his own thumb, because he simply didn’t care about pain – and he murdered Sidney because intellectually he knew he should help… but emotionally he didn’t care either way.

Dean tries to reassure him – but Lem knows he will kill again and suggests Dean kills him. When Dean refuses, Lem decides the only reasonable thing to do is turn himself in, confess to all the murders so he is rendered safe. He’s doing the right thing, not because he feels it, but because he knows he should.

In the aftermath, Sam comforts the orphaned child. Sam and Dean continue to ruminate on what the Darkness is and how different people reacted to Amarra.

Amarra watches them drive off.

I think both the brothers have a secret thing for ropes (and possibly concussions). It can be the only explanation for the vast amount of times they are captured. I would say Dean is in for some severe brain damage the number of times he has been knocked unconscious – but it seems petty to quibble about brain injuries magically healing on a show that has had both brothers return from the dead a squillion times.

Being soulless is an interesting condition – the whole feature of not caring can be both horrifying and freeing. It’s a brief but interesting look on how losing souls affects different people – on whether emotion can be a comfort or an all defining sense of who you are, or whether it is a burden that brings you incredible pain and suffering. It as a nice take on soullessness, emotion and how it affects different people. The whole idea of soullessness is really well done in this episode – not over the top evil, just… not caring.

I also was somewhat interested in the idea of Lem with intellectual ethics and morals without any emotional attachment. It’s something we don’t see a lot – usually when someone is depicted as a sociopath they are depicted as inherently evil and out of control. Sure the lack of emotional limits makes for less inhibitors for violence – but both Sidney and Lem didn’t just show people killing randomly – they showed them killing for reasons (even if they were reasons most people wouldn’t agree with). I am torn between Lem giving himself up – on the one hand it would have been interesting to see him going free and not being dangerous – because his intellectual dedication to doing the right thing was sufficient conscience to him. On the other, this intellectual dedication to doing the right thing is proved by his willingness to give himself up and being concerned by his memories not being sufficient.