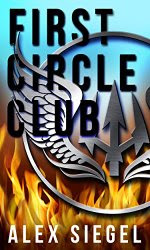 Virgil didn’t lead a good life – not totally awful or he would have been banished to a lower circle of Hell than the first circle – but not a good one. Facing a dull eternity in limbo stretches ahead of him – until something unprecedented happened: a soul escaped Hell.

And not just any soul – but a serial killer hunting teeangers.

The whole concept of the treaty between the two sides – and all the loop holes and amendments they’ve had to produce to try and cover everything. I can see it so well and it’s such a lot of fun. On top of that all the demons and angels are such creatures of the contract that they have little imagination or skill or intelligence beyond their designated roles. And I love that they have budgets for divine or infernal interventions.

And so we have our protagonists – people in the first level of Hell who are bad – but not quite that bad. And the people in the first level of Heaven who are good… but not quite that good.  Virgil and Lisa from Hell and Sara and Arthur from heaven. As a team they work well for having a lot of excellent complimentary skills which makes all of them very valuable contributors

I say that but I do think the story focused mainly on Virgil and Arthur, leaving Lisa, a Black woman and Sara a White woman in lesser role. Part of this is the nature of their powers – Lisa’s power is to be able to hurt with a touch while Sara has the power to heal. Despite all of the combat in the series and Lisa definitely been the most dangerous of them, the true powers that are used are the social powers – Virgil’s power causes shame and Arthur’s causes trust

And I love Arthur – his endless sincerity and trust is not only endlessly amusing (yes they will stop attacks by talking about sad and tragic childhoods) but really used well. While so many books and show resort to torture when they need answers, this book uses Arthur. And not just his woo-woo, but his expertise as a psychologist and his genuine caring for other people. Pan doesn’t move some people, but Arthur’s ability to connect with people in pain and with psychological and emotional issues. He connects with people and that works far more than torture

In fact that’s another thing this book does repeatedly – there are no mindless goons. When mercenaries are ordered to shoot unarmed people they say no. When people are given the chance to surrender, they do. When guards are killed it means something because they are people. And yes, it may be comically silly to have Arthur reduce a whole room full of guards to tears talking about their sad childhoods, it happens BECAUSE they are people not just nameless people with guns.

The world building is also fun in that it shows both Heaven and Hell as flawed – and it criticises it in many small ways and instances. Heaven is pleasant, Hell is not… but they’re both so very pointless for the people in it. Sara and Arthur are happy to come to Earth because Heaven is dull, it’s boring – and even if pleasant it’s pointless. They have no purpose, no matter how pleasant – which makes existence pointless for driven people like Sara and Arthur. And since there’s no concept for redemption then what is the purpose of Hell? What does it achieve? Even when people are truly repentant, truly want to change and feel the full gravity of their actions, there is no chance for them ascend or redeem themselves.

No-one has a big grand speech about it but there is clearly some inherent flaws in the system. The sheer fact that Sara and Arthur don’t want to be in Heaven and would rather be in Earth is a rather glaring flaw right there. I think this is definitely going to be addressed later in the series, it’s one of the things I look forward to.

There are other flaws that are more dubious…. The big bad serial killer is a gay man with a hyper religious father who tortured him with guilt and shame due to the “sin” of how he was born. Yes this is more an indictment of the religious father than him, but the fact is that all that pain and shame turns him into a serial killer. A closeted gay serial killer driven insane and murderous by his repressed sexuality is not a good trope or inclusion.

Some of the sins listed which get you into Hell are also worrisome – first of all it is overtly judeo-Christian so even if you are wonderfully good being, for example, pagan (the example used in the book) goes to Hell. Abortion is also mentioned as sin. I want to see how this develops into the fact that

There’s Mei – she’s the technical expert they recruit who is extremely well skilled and does some wonderful work to bring the team up to date. There’s no doubt about her skills – but Virgil flirts (clumsily) with her because she’s beautiful – because he likes Asian women. It could easily have been simple attraction to a beautiful woman without making a fetish of her race.

And Lisa does come off a lot like an Angry Black Woman on more than a few occasions, especially since (like Sara) she has a reduced role and hers is mainly hitting things. She also has her race over-referenced at times (like at one point she runs like a "black gazelle"... not just like a gazelle? Are black gazelles faster? Would we refer to a white gazelle if it were a white woman) Also when they disguise themselves, Lisa always wears make up to hide her skin colour. None of the others really feel the need to constantly change their race when disguising themselves – is Lisa the only Black woman in this world or something?

This was an excellent, fun story with a really excellent world and some really intriguing characters. But more than that it has an amazing potential to grow and become a really unique and really fascinating series.