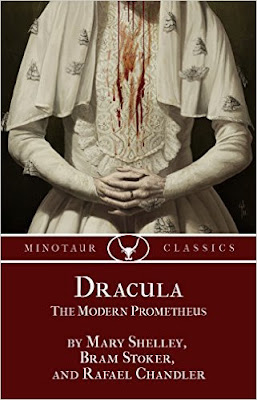 Mina Harker, newly qualified solicitor, was just going to Transylvania to aid in the transfer of property – the Countess is certainly a little unusual but she is also educated and worldly and she certainly appreciates that

Until it becomes clear she’s stumbled onto something very unworldly, one she barely escapes – but when that threat follows her to London she gathers her fellows and is determined to fight

Even while the Countess’s grizzly experiments rise from the grave with her own desperate purpose.

This book has that very elaborate writing that is quite common with a lot of books set in the Victorian era. This does a lot to convey a greater sense of time and place – which did work very well to create that sense of place that these books needed. But it does make for a book that is quite long winded – it does slow the plot down.

This slow speed is a particular problem because, certainly in the beginning, we kind of know what the story is going to be like. Yes, bits have been changed and the book combines both Dracula and Frankenstein. We all know when Mina Harker arrives at Countess Dracula’s castle roughly how this plot is going to play out. Elaborate and beautiful language may be good for the setting – but we know this setting – and it may set the tone but it makes the book very slow to start and get past the basic plot lines we don’t already recognise.

Once we do get past that beginning it develops excellently, weaving the two stories together into a coherent whole. The Countess and her drive to bring back her beloved sister resorts to any means she can – both mystical and “scientific” – regardless of the cost and with her obsessive focus and brilliant intellect, leading to both vampirism and the monster being created.

How the heroes came together to oppose her was decently done, though I do think it was convenient that the poor, discarded Lucy had 3 separate fiances ready to recruit for the cause and that two of them were so well placed to be useful.

Still the group worked really well together – extremely well. And they fought the Countess with dual not so much of might and magic but cunning and traps and resources trying to push each other into a trap without facing the strengths either had (the Countess’s mystical might and all the religious defences the Van Helsing’s group could bring together in response).

Into this battle comes Eve, the creature herself – mighty, breaking all the rules, tragic and angry and enraged and full of excellent commentary on how the dispossessed and shunned face so much persecution and have so little chance

I also like how she uses this to try and make common cause with Mina Harker, our protagonist and the main actor of the book. As a woman and “an adventurous woman” at the time, in her bloomers and riding her scandalous bicycle, she is also often shunned and reviled but pushes through regardless. As she does this we do have the brutal consequences of being an independent woman spelled out to us – with women being so easily thrown into asylums for daring to think for themselves or act without male control.

This bring us to the obvious – the primary actors of this book are women. While the humans gathered to fight are primarily male and motivated by the loss of a woman, the main character among them, the one who comes up with the major plan and the one whose story we most closely follow is Mina’s – she is beyond doubt the protagonist and takes the lead in the group

The Countess herself is, of course, Countess Dracula, a woman and a very powerful and, above all, intelligent one. Her power, after all, can be put down to woo-woo – but her intelligence is not a matter of the supernatural, she is simply just brilliant even while she is also utterly alien in her inhumanity

And we have Eve, the creature herself – looking for love, for belonging and furiously despairing.

Unfortunately, there are no POC and no LGBT people in this book.

I really like how… tragic this book is. It’s a horror and a tragedy and it is not going to end well and nicely. When the human characters stand together and oppose the darkness that faces them they know they’re going up against impossible odds. It doesn’t end cleanly or easily or smoothly and it was never meant to. Countess Dracula is set up as a particularly lethal force – she was really well characterised as a terrifying enemy to face.

In honestly, the problem I have isn’t so much this book but the previous books by this author I’ve read – Hexcommunicated and The Astounding Antagonists. Which were two utterly awesome books that I adored. And this book was…a good book. My expectations were way too high for this book to meet and ended up with me enjoying a book yet still being pretty crushingly disappointed because I was so hoping for another utterly awesome read.