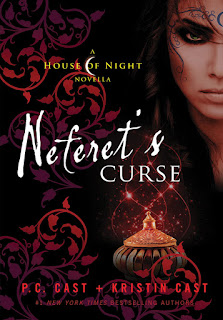 Now, on the plus side this book does have a very haunting depiction of abuse and sexual assault and rape within the family, especially back in such an utterly patriarchal era where women are constantly abused and demeaned as hysterical and nonsensical and not to be trusted to look after themselves. Emily, who will become Neferet, is utterly helpless and with very few avenues to actually escape.

That includes being ruthless and hurting people she considers friends because she just has so few avenues that she has to take any to actually free herself and protect herself.

Of course, that desperation is kind of undermined by the fact that Emily is not exactly a nice person anyway. I don’t entirely disagree with this, the idea that she would have been a saint before becoming Neferet would be ridiculous. At the same time she is a woman of her time – and is unlikely to care over much about the poor she would consider beneath her beyond a kind of demeaning pity (of course, she doesn’t even manage that). To the surprise of no-one, this book fails to draw the line between depicting bigotry and challenging bigotry, like so many other books.

The main problem is now how Emily’s captivity is portrayed as she grows ever more afraid and lost and desperate. Nor how her saviour seems to be so much less than she hoped for (I actually really like how her saviour turns out to be utterly flawed and not what she really wants. I actually like that skewering of the white knight ideal)

The problem is the very concept of this book.

This is Neferet’s origin story. The utterly evil monster of the series. The caricature of evil. The woman who has sex with evil cows. The woman who kills civilians and fixates on a school girl. The monster who is literally the worst, who loathes all things human.

And this? This is supposed to explain that. This is why Neferet became what she is – because she was raped. That is terrible – this epic victim blaming and demonisation of a woman who became evil because she was victimised.

But let’s make this even worse: let’s put this in the context of the series. Because this is a series which has notable redeemed rapists. Stark and Kalona are both playing on team good guy now (or whatever we call Zoey’s devoted sycophants), while their victims are frequently demonised or ignored. Adding “Neferet is evil because she was raped” to this already toxic stew is just rubbing festering faeces into the gaping, infected wounds.