Inexcusable Homophobia on The Magicians 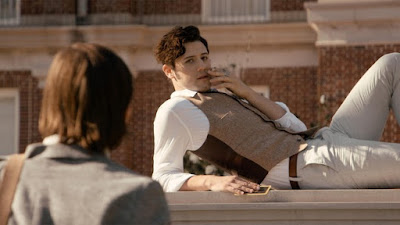 Before The Magicians even aired, the people behind it did the now almost obligatory bits in LGBT media (check that “sexual events” happen to Elliot and his relationship “doesn’t go as expected” hah oh you crafty writers, may someone strangle you with a rainbow scarf) to talk up their regular inclusion of a gay characters and try to get a gay following before the show even airs.


I do have to say I wonder at the mentality that is willing to troll to LGBT media to try and generate a fanbase and then thoroughly crush those hopes with maniacal glee. I suspect sadism.
Since we’ve seen a whole lot of this before, we weren’t exactly taken in by the selling of Elliot as a positive character. It was no surprise that Elliot turned out to be exactly the kind of stereotypical gay side character we’re so used to: a sassy, quipping, comic relief there to delivery snarky put downs, cute one liners, and saucy innuendo. And, don’t get me wrong, funny innuendo and snark can be great fun - but this excessively stereotyped role is a box gay men are continually forced into (often to the exclusion of any actual characterisation or personality). Elliot joined characters like Orphan Black’s Felix and True Blood’s Lafayette in being the gay jester - a trope that hasn’t really changed since the days of Are You Being Served.


Elliot and Margot lurked in the background, making random quips, drinking a truly improbably amount of alcohol and generally being musing, pointless caricatures. If it had remained that way we’d probably have rolled our eyes and put it down to another stereotyped extra existing to amuse straight people: another gay clown that straight writers continue to think that background comic relief actually counts as inclusion.


But it got worse. Oh it got so much worse.


The Gay Best Friend is a pernicious trope - one that has a powerful reflection in real life - where gay men are reduced to pets and toys for the amusement, fulfilment and general service of straight women. There is an entire culture that views gay men as accessories and toys of straight men and, more galling, this is seen all too often as progressive even as it is dehumanising and reductive.
And Elliot may actually take the prize for being GBF - not so much from his actions, but because of Margot - the straight woman he duly serves. When he is amusing and quipping away, Margot loves Elliot and they are the best of friends. When he actually has anything in his life that doesn’t involve amusing her? She can’t stand it. How dare he have an existence outside of her and her personal grooming (and yes, of course the show went there. Of course it did because what’s the point of a GBF if he doesn’t care about your bikini line?)?! When Elliot met Mark and actually spends time with someone who is not Margot she is outraged, she is furious, she lashes out, she pouts and, through the influence of a genie, she inflicts a pretty nasty homophobic scene on him (which we’ll get to).


This demand that Elliot be there to serve her only gets worse after the tragedy of Mike and Elliot actually feeling emotions. He’s sad, he’s hurting (this show depicts this by more drunkenness and drugs ALL THE TIME), he’s in incredible pain and Margot is troubled, sad and furious - because he’s not fun. He’s not her toy any more. Her stunning disregard for his pain, her actual inability to understand that he even feels something that doesn’t amuse her is a horrifying indictment of this trope - or would be if the show made any attempt to call out this bullshit even once. In fact, there’s zero attempt to make Elliot and his pain even remotely sympathetic - he’s in pain, but that pain manifests by constant, overwhelming substance abuse: including when they’re all stuck in dangerous magical libraries and trying to stealthily escape bad guys. Elliot is a complete burden on the entire cast and a constant source of sabotage for the story, there is nothing sympathetic or even humanising about his depiction. Not only is his grief dismissed as an irritant to Margot - but that is how it is depicted for the whole series. His grief is a nuisance. His grief is a problem everyone has to struggle to work around. His grief is an irritant to all of us - never something to respect. Which sums up Elliot - he’s never there to respect. He’s something to laugh at, or something to regard with contempt.


This depiction of LGBT service is a nasty stain on the series which follows with the all-too-brief depiction of Kira, a Black, disabled lesbian who exists for just long enough to provide service to Julia. She is equally undeveloped - Black, disabled lesbian is literally all we know about her - because she only exists to serve. Even that limited depiction is flawed - because it makes little sense that a woman who quite literally can live in a world defined by her happiest memories decides her life just isn’t worth living. She doesn’t have to make sense. She doesn’t have to be a character. She’s a servant. And when that servant has served her purpose she can be disposed like any other tool - which is exactly how she is treated: a disposable tool for Julia.


Which brings us to disposability - because tragedy and gay death are big here. Kira was killed off under a pretty convoluted fashion because leaving her around after she had helped was apparently unthinkable - because gay death is better angst. Elliot’s whole story is defined by tragedy - a tragedy that not only no-one cared about, but filled all the classic tropes of broken gay happiness, waiting until Elliot and Mike seemed close to being happy before killing him off. No, before making Elliot kill him off they had Elliot open up, begin to show some characterisation, begin to show some depth and have an actual relationship - all to be cut off seconds afterwards (there’s really no wonder why Elliot was so miserable, though, again, I have to stress no-one cared). Mike’s death was predictable from the minute he was introduced because shadows of his being evil were brought in - tragedy was built into the relationship from the very beginning. Elliot’s rapid happiness and trust was there not to develop him, but just to lay the foundation for his inept suffering.


Beyond attitudes of other characters and the gaydeath and suffering, we really need to look at how the show itself depicts the LGBT characters. This is a show which doesn’t generally flinch over what it shows. We’ve seen graphic rape, we’ve seen heterosexual sex, we’ve seen (female, of course) characters chug a jar of sperm. And we’ve seen gay characters… fade to black. The depiction of Elliot and Mike was considerably more sanitised. They barely touched, we never saw them have sex, kissing was brief, low light and rare and the one sex scene they had we focused on Margot. Even Quentin’s Elliot’s and Margots rolling around was seen through teeny tiny flashing (oh and we have to have an aside here. On anotehr show this could be a potential method to introduce Quentin as bisexual but instead was used as a magical and alcohol induced drama that was all about hurting his relationship with Alice. An opposite sex relationship as well - just as Mike’s relationship with Elliot was all about damaging Elliot’s relationship with Margot and the rest of the group). A show that is willing to show hearts being ripped out flinches at the idea of two men getting naked together. This squeamishness is depressingly common and we repeatedly see gay sex as being treated as considerably more obscene than straight sex - and in so doing it props up the idea that LGBT people are obscene or unfit for depiction. This is another toxic trope which is all too common.


This homophobic trainwreck of servitude, ineptness, fade-to-black and death all culminates in the last episode of the series which was one of the worst episodes we’ve seen of ANY show for so many awful reasons. We have to look at Elliot’s ending and him finally having the potential to be useful: by dispensing with any gayness. Yes, Elliot becomes an asset by turning his back on his sexuality - to get the magic dagger Elliot has to marry a woman.


There’s few ways this could have been done well, but it could have been done less awfully. We could have depicted Elliot more clearly as bisexual by having him show some actual interest in having sex with women rather than seeing it as a duty. We could have had his legal-by-necessity marriage not come with a magically binding monogamy. Just stop and check that - to become useful and productive, Elliot not only had to marry a woman but he had to be magically bound to NEVER have sex with a man until his wife dies. Elliot is useful, powerful and worthy only when sex with men becomes an impossibility.
And Elliot’s reaction? He’s cool with this. No outrage, no angst (indeed, even his pain over Mike just damn vanishes). Worse than that, he treats this as “growing up”. He treats this as being “less selfish” and giving his life meaning. His sex with men days are over and meaningless, his tragic love affair is now dismissed as selfishness. His relationships with men meant nothing - only a marriage to a woman can bring his life “meaning”.


That is breathtakingly homophobic. That is bigoted beyond words. This depiction of gay relationships as less than straight relationships, as hedonistic, selfish and self-serving (and note that the drunken, drug using Elliot seems to sober up when he’s dedicated himself to lady-sexing only: And don’t say he didn’t have time to get drunk or drugged. Before he was saved by the magical enforced heterosexuality he managed to get high on fecking carrots. Carrots. Such is the power of a debauched gay! Being bound to a woman is REHAB for the debached gay man) is toxically common. Gay men as sex crazed hedonists, alcoholics, drug users whose life is childish and meaningless is a virulent meme that has vicious real world consequences (just google some of the arguments against marriage equality - Elliot is a virtual poster child for everything they argue against).


I honestly do not have words to truly describe how virulently toxic this depiction is - there is a whole industry that has developed on forcing sadistic conversion “therapy” torture on LGBT people - especially our youth - because real, meaningful, moral lives need to be heterosexual, no matter how many of us are driven to suicide (or those drugs and alcohol we’re so often shamed for) along the way. There are actual hate groups that would have been more subtle with their propaganda than Magicians was with Elliot.


On Magicians a gay person is doomed to serve straight people either as a tool or a toy (if they aren’t actually capable of being a tool because they’re too inept), doomed to be disposable, their deaths having no meaning and can only save themselves with magically enforced straightness: which they then welcome as saving them from a pointless life and giving them meaning. And words have not been invented in the English language to condemn this sufficiently.