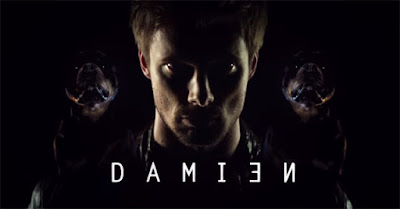 My recaps of Damien tend to be very short. Part of this is because I am rapidly running out of fucks to give about this show (and, to be fair, I didn’t exactly have a huge number to begin with) – but it’s mainly because very little happens. As I’ve said time and again it’s all about the ominousness and the theme and the darkness which is all well and good – but it’s kind of already known. No-one going into this show is not aware what’s going on and just how much ominous foreshadowing do we need?

On top of this it has a whole lot of problems with the ableism of it. This ominousness is constantly depicted by having numerous mentallyill people babble ominous inanities. Doubled up on this episode with Damien being in the secure psychiatric wing which means we get the classic horrendous depiction of mentally ill people ranting and screaming and being tied up and bashing their heads against various walls and generally utterly failing to be people and instead being dramatic set dressing. This depiction is old, it’s vile and it’s utterly dehumanising. Mentally ill people are not props to trot out every time you need something to be suitably creepy or some nonsense to babble.

Even Damien’s own brushes with mental illness are more about exposition and ominousness than an actual depiction of mental illness. Which is annoying because they’re right he has been through some horrendous things, he has suffered, he could very well have PTSD – but it’s all about the ominousness. It’s another tool. Another prop.

We also have the introduction of Margot, someone precious to John, possibly wife. She’s disabled, in a wheelchair and mentally ill – which means she babbles more ominous semi-prophecy to Damien, of course she does. In case you had trouble interpreting prop-babble, John’s after power and to become one of Damien’s powerful lieutenants/generals/head honchos. Though, really, did we need ominous prophetic babble to establish it.

While visiting, Damien also finds John’s murder temple where he kills goats in the name of the antichrist. Why he wants a goat isn’t quite explained but killing goats seems to be the done thing. I wonder where the get these goats anyway, I mean chickens – yes, we’ve got loads of chickens, but goats? I’d definitely be hard pressed to find a goat.

Anyway, Damien decides to leave one of these bloodstained implements on Margot’s lap as some kind of warning to John (after a confrontation earlier in which he points out John is an utter liar and totally on team Ann Rutlidge). And yes, this does mean Margot was used as a prop. Again.

John runs slightly quivering to Ann to beg her to intercede and save her from the murdery antichrist who may be dangerous. He wants the Meggido dagger which can kill Damien – though it takes all 7 to kill him body and spirit, one can probably kill Damien and pass the magic on to another antichrist. Ann doesn’t give it to John – but she does offer it to Damien in case he actually wants to kill himself. Why offer this? Well John is in it for the power, but Ann’s apparently a total Antichrist fangirl. Damien considers it but since we have 3 episodes left this season, it should surprise no-one that he doesn’t go through with it.

Meanwhile Detective James of the Death Wish continues to be troubled by the various supernatyral occurrences that nearly killed his kid (his partner, understandably, thinks he’s paranoid and wants him to see a therapist because we’re throwing around mental illness all over this show without any actual depiction. And, no, babbling, ranting props are not depictions). He decides to double down on investigating Damien this time going after his fellow college mates.

He discovers that one of Damien’s college mates was horrendously burned in a strange, secret club initiation (no, not one involving putting your cock in a dead pig’s mouth – there are some lows that even the antichrist won’t stoop to) which went wrong (butane was supposed to burn off while leaving the guy unscathed). Detective James tracks down the heavily scarred victim, Charles, who describes Damien as an extremely abusive bully who forced it on to him – though the guy who initially revealed the burning described Charles as worshipping Damien

Since goes on to horrible murder the snitch I think we can guess which is more likely.

While Damien is gaining a fanclub – his paranoia is driving off Amani and Simone. And Simone is found by Sister Greta – the exorcist nun who is determined to discover if Damien is the antichrist. And probably give him a good stabbing