The Magicians, Season 1, Episode 13: Have You Brought Me Tiny Cakes?

There are some aspects I like, I liked the narrative tool of Qunetin writing a story since this was all about the series of books he loved, after all. I loved him writing his own story, himself as a hero and pretty much finally puncturing all of his own illusions. I liked how this worked with the description of Fillory both as a magical, amazing place but also with a heavy dollop of cynicism you get from reading fiction that’s just a bit… out there. That sense of “hey this doesn’t make sense”. So Qunetin pokes the fact the air contains opium to make sure everyone is impressed and how it makes no sense that the High rulers of Fillory are always aliens from Earth for Reasons. I even like little touches like, in a land where some animals can talk, snares to catch them can be escaped by intelligence to ensure no-one is eating an intelligent being. That’s some crafty world building

I also liked how, despite even a god telling him that he’s the special one (because he kept holding on to a children’s story which is definitely a dubious definition of the special chosen one), Quentin sits down and takes a long look at himself and decides that, no, not really. He sums up all of his issues and realises he’s pretty much not Chosen One Material. Especially since there’s Alice there who is definitely more skilled, more capable and generally better than him – so sets her up as the Chosen One, as the person who will bring down the Beast.

I’ve always said it made no real sense for Quentin to be protagonist. Julia, Alice and Penny were always better choices

Ok, here endeth the good. Now for the trying-too-hard-to-be-edgy bullshit of various kind.

Minor round of Bullshit, not only did Penny not actually get to be protagonist and get his hands cut off – but after a couple of episodes of actually developing his character and making him more involved he ends up playing the bus in the finale. Yay go transport.

Next – to get the knife to kill the Beast involves a convoluted set of circumstances (including the aforementioned High King alien thing) leads to one of the cast having to marry a Blacksmith’s daughter in order to get the knife. And it’s… Elliot. Of course it’s Elliot. Not only is Elliot now forced to marry a woman but marriage in Fillory means he is COMPULSORY MONOGAMOUS. Just to top it all off, he now decides his life was utterly miserable and now he can stop being SELFISH and his life has MEANING

The hell is this? Did I miss Orson Scott Card’s writing credit? So he’s not left all that pesky, SELFISH, debauched, MISERABLE mansexing behind and can now lead a virtuous, reasonable life forever monogamous with a woman. Well with the season finale finished the writers can now go back to writing legislation for Mississippi.

Next round of bullshit. It turns out after all of this, the Beast isn’t evil paedophile author, nope, it’s Martin. His victim. Yes he has been driven to darkness and evil and massacres by his abuse – the abuse victim has turned evil. At least they keep thinking the author is duly evil, but abuse victim becomes a monster? Really? We’re playing this?

Now for some extra fucking epic awfulness that needs to die in fire. To wield said blade, you need to be a master mage or empowered by a god. This is established as possible by imbibing god semen. Yes. Really. I still wonder if part of the reason Quentin passed on his chosen one status to Alice was so the show didn’t have a man drinking a flask of semen and instead had a woman do it.

This doesn’t work and the Beast duly mushes everyone, including cutting off Penny’s hands no-one else gets mauled this way) and knocking Alice aside… but Julia ambushes him instead

And how does she have the power? Hey remember when I said that whole “benevolent goddess” thing was definitely bullshit? Guess what? It’s bullshit! Benevolent Black goddess turns out to be a monster trickster goddess who warns them to check who they’re inviting in before killing everyone but Kady, who Julia saves – and Julia who he brutally rapes. Therefore “empowering her” with god semen.

I could have happily gone my whole life without typing that line. I can’t even begin to list the many reasons this didn’t need to exist. Even if you had to stick to the bullshit idea that imbibing godly fluids is necessary for power you could have had Julia kill a possessed Richard to save Kady and end up with blood in her mouth. You could have done literally ANYTHING other than have a magically empowering fucking rape resulting in two magical rape victims, both horribly transformed by their abuse facing off.

Hey, let's make it worse - see, remember how Jane has reset time a gajillion or so times trying to find the variable in which they defeat the Beast? The variable she was looking for was "Julia was raped." That's what we've done here, resetting the time line until they can win - the "difference" was Julia not going to Brakebills, a chain of events that ended with her rape.

Well fucking done authors. Have the George R R Martin award for maximum Grimdark. Do we feel mature and above it all now? 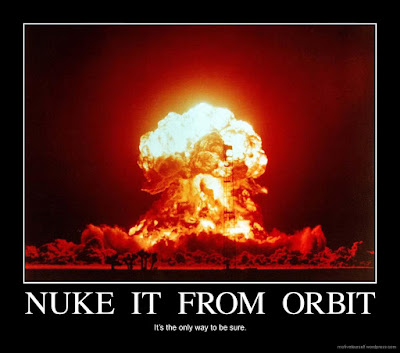