Blaize and the Maven (The Energetics Series #1) by Ellen Bard 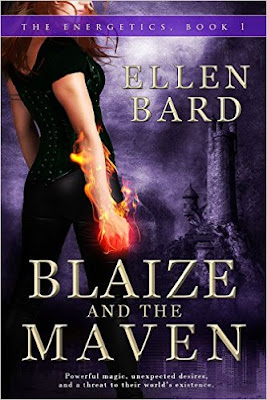 Blaize has just finished her first chakra trial and is an adept for fire – Manipura – and is now moving on to train her secondar chakra, Ajna, with renowned dream walker and prophet, Cuinn

However, Cuinn has had a terrible history with his previous adherent and is definitely not ready for another one. Especially since his dreams have been hinting at a terrible future he needs to uncover. The last thing he needs is an adherent under his feet

But Blaize may be an important part of the prophecy – and their enemies seem to think so when they target her.

This book is, firstly, a paranormal romance, it was how it was marketed and labelled. And that normally makes me look at the people who sent me this book and asking them if they’ve made any effort to examine Fangs because, in all honestly, we’re not a big fan of many of the paranormal romance we read

But I liked this book

The story works extremely well in addition to the romance. Yes, there’s a romance there, but there’s  plot there that exists above and beyond the romance. I have found a lot of paranormal romances have a plot line in addition to the romance, but it often exists just to further the romance – and you can tell. It’s generally shallow, under-developed and with plot holes you could drive a double decker bus through. Here the plot and the romance weren’t co-dependent on each other (which, when we think about it, makes a lot of sense. Romance may be important to the character, but it’s unlikely their love life is really going to have that much influence on the fate of the world etc. No, not even with the earth shattering orgasms).

There were some clichés to the romance I didn’t care for, or I’ve just seen so many times that I just don’t have patience for them any more. Both characters have past issues that make them reluctant to venture into a relationship (both of which are a little dubious). Both have tragic or semi-tragic pasts. Both get over said tragic pasts in such an unseemly length of time that I’m left wondering why the author felt the need to have them there at all. It’s like someone looked up a trope list and decided “hey, we need to have X, Y, and Z, put them in”. And, really, if you’re going to give your characters a compelling developed reason why they avoid relationships… fine – but actually have them avoid relationships. If it takes them 3 days to resolve these terribad issues before getting to the humping then maybe those issues shouldn’t be there

But there were also some nice subversions. While there are many exceptions, we still do see a lot of celebrating virginal or “gently used” women next to experienced, older and sexually more capable man. In this case neither party is a virgin and, if anything, Blaize is the instigator of a sexual relationship – she’s confident, experienced, a happy pleasure seeker. And she is the one who wants a sexual relationship rather than a romantic one. At no point is she shamed for this or looked down on for this – she is a sexual being and that’s never seen as a bad thing

She’s also the more capable fighter with more direct, fighting powers. She is trained to be a soldier, her element (fire) is considered the element of the Energetics who fight, while Cuinn is more cerebral with a psychic super power which is all about dream walking and seeing the future. She is the more physical and dangerous of the pair. It’s probably depressing that this is a subversion, but it generally is.

She is kidnapped – as seems to be an utter requirement for every female main character in a romance. But she does rescue herself almost entirely which does a lot to help remove the problem of this repeated trope.

I actually really like both characters – they’re very well realised with their own histories and viewpoints and their own very discernible opinions and voices. They’re very well realised and not just in terms of their romance. The secondary characters are only touched on so they’re much less developed - but we’re missing any of the usual female antagonism. There’s even a considerable level of sympathy for the villain no matter how angry Blaize is with them. While they’re not extremely well developed, I rather suspect that many of them will be developed in future books, if nothing else because I suspect they will be future romantic pairs in future books.

That’s not necessarily a bad thing. Honestly I only noticed the lack of great detail in the metaplot on writing this review and thinking back on the book – I didn’t miss it while reading it. It gave a nicely ominous sense and a good background for why this story is happening while not actually getting in the way of the main elements of this book – introduction.

Introduction of the world, the history (with its ominous Atlantis flashback that gives texture to the overall story and we get a sense of what the meta is all about) and the primary characters, their support network and how this series is going to grow are all done excellently. This is all about the introduction and it does a very very good job of doing that introduction, all alongside a well written and paced story. Yes, that includes the romance that I wasn’t a fan of but certainly was a good deal better than most I have read and I loved how it balanced with the plot. The romance was there, it was important to these characters but it wasn’t more important than the plot nor was the plot dependent on it. And as soon as both characters realise what is at stake with the prophecy and the plot they didn’t allow any of their emotional issues to spill over to the actual plot line. That’s something else I appreciate a lot because so many of these romances do seem to make their protagonists’ romantic life more important than the world itself. In general, there’s a lot I like about this book.

In terms of diversity there’s a huge issue with the underpinning of the book – all of the Energetics get their power from chakras and these are directly lifted from Hinduism. Each Energetic has a primary chakra and a secondary chakra which shapes their power – Blaize has fire and psychic – or Manipura and Ajna. These are directly lifted from Indian religions, but there’s absolutely no acknowledgement of this, there’s no indication of the source of these beliefs (and I haven’t used the Hindu mythology tag on this review). All of this magic and customs and beliefs is depicted as coming from Atlantis – a long lost civilisation – and the people are both not entirely human and then spread all around the world. There’s very little indication of the race of these original Atlanteans beyond “brown eyes and dark hair” which pretty much is the ultimate cop-out descriptor since it can pretty much apply to any race.

In terms of character diversity there are some minor character inclusions. As I mentioned above, the side characters are not overly developed beyond Blaize and Cuinn, both of whom appear to be White. Beyond bit characters, like a Chinese master who helped train Blaize briefly, the only other major POC I can think of is Tierra, one of Cuinn’s friends who is described as having “butterscotch” skin. It’s one of those descriptions which is both a little vague and has that problematic element of comparing POC to food again. She’s also something of a caregiver to the other characters

I am very unsure about Blaize herself. No description of her particularly points to her being a POC. Her aunt is and so is her cousin who appear briefly at the beginning of the book – but I don’t know if Fai is her blood relative or her husband, Marius is. Blaize doesn’t really stand out to me as a POC but nor do I feel I can definitively say she isn’t. There are no LGBTQ people or disabled people in this book.

I am curious about this series and would like to see it develop more – but I have some extra reservations about the whole appropriation that utterly underpins the whole series which is a definite problem. It makes it hard for me to fully enjoy the series as the elephant in the room is not really ignorable. I am also concerned that the romance could easily overwhelm this developing powerful world setting and story