Wynonna Earp is a descendant of the famous old west lawman Wyatt Earp.  Colour me unimpressed. She is drafted by the US Marshals Black Badge division to go after all things which go bump in the night.  Wynonna is a no nonsense cop who experiences absolutely no fear up against creatures which would make the most of at the very least scream and run the opposite direction.

My decision to read Wynnona Earp is based on our commitment to read the source material of all media that we watch.  Wynnona Earp, the television series which is currently airing on Syfy.  The television show really is aimed around the idea that Wynnona is a descendant of Wyatt, which is not a central point to the comics.  She is chosen for her skill and her fearlessness.

I find Wynnona as a crime fighter absolutely ridiculous.  She runs into situations with little planning and little back up.  Invariably, despite the fact that Wynnona is strong, she needs to be saved by a man twice.  Can you picture any male protagonist with the same background having to be saved, let alone by a woman?

The artwork in this comic leaves so much desired.  Why is it that any male law enforcement official is dressed from head to toe, while Wynnona sports thigh highs, a bare midriff or short skirts?  Who gets into battle looking like this? 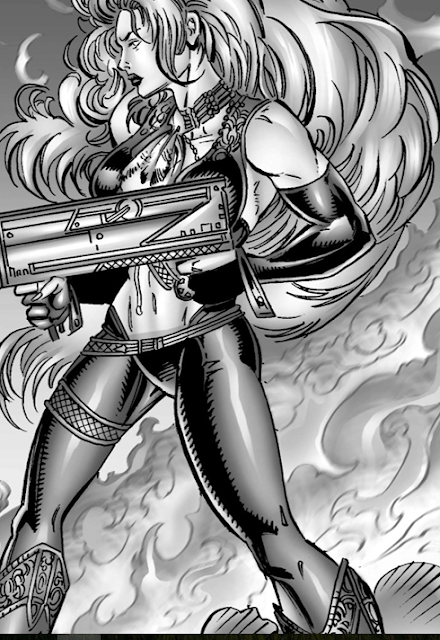 This is absolutely Hawkeye Initiative material. What sense does it make for her to go up against a nest of vampire who are hopped up on drugs dressed like this?  If that's not enough, we even have drawings done is such a way to show off T&A. 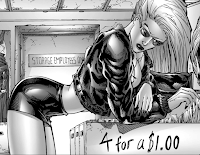 A kickass protagonist is an awesome thing but a kickass protagonist who is overly sexualized is sexist and ridiculous. The horrible portrayal wouldn't have been so bad if we had seen even a modicum of intelligence coming from Wynnona.  At best, we got badly written one liners that simply rise to the level of bad snark.

Leaders of international criminal organizations are being killed. This leads Wynonna to little Cairo in New York City.  Amir Tasmir has big plan is to bring the goddess"Timat" back to life and use Wynonna's body as her vessel.  As far as I am aware, there is no Goddess Timat but there is a goddess Tiamat of the Mesopotamian Religion (Sumerian, Assyrian, Akkadian and Babylonian) At any rate, apparently it has been prophesied that Timat will make her return in a blonde body.  Go ahead and roll your eyes because I did.  Why the hell would a supposedly ancient Egyptian goddess choose to come back in the body of a blonde white woman? It makes absolutely no sense. It seems to me that this prophesy is all about making Wynonna the extra special special one. If Wynonna's character had been developed beyond T&A, such a cheap trick wouldn't have been necessary.  If that were not enough, Wynonna refers to the men who work for Amir as, "sand stooges and stinking sand lovers"  Thanks for that. This language isn't even coded; it's blatantly racist.


In terms of GLBT characters Wynonna Earp is completely erased.

There really isn't much that is redeemable about this comic.  It's not smart, it's not funny and even the illustrations aren't great. There's absolutely no character development beyond Wynonna repeatedly confirming that she is related to Wyatt Earp.  The antagonists might as well be twirling mustaches and are easily defeated.  The comic never rises to a crescendo and simply limps along from one fight scene to the next. Essentially, there's no real discernible plot.  Thus far, I haven't been a fan of the television series but it's a vast improvement on the source material thus far.