Vampire Diaries, Season 7, Episode 17: I went Into the Woods 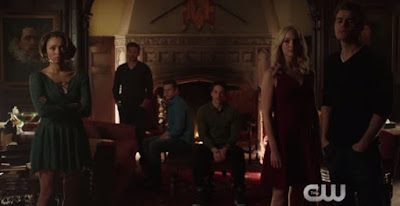 So, the phoenix stone was broken thanks to the Dead Lesbian Trope which means, as Rayna helpfully explains to Valerie (Rayna is now capturable by Valerie because everyone’s power level on this show changes based on what’s currently convenient), all the souls trapped inside it have now escaped and are winging their way into any convenient dead person: human or vampire.

Apparently. I mean, she hasn’t targeted anyone specifically in the last season and has pretty much killed any vampire she comes across. But her motivation changes every other week anyway – I think the writers are now using a roulette wheel to characterise her.

This does mean Stefan has escaped and is now occupying the body of a recently deceased alcoholic drunk driver who is subject to a manhunt in the middle of a snow storm. Also, because he’s in a human body that means he has three days before he implodes anyway (as Alec learned when he tried to bring Jo back from the dead). He’s in the body of an alcoholic so they can maturely examine the complexities of addiction. Ha! No, this is The Vampire Diaries, he’s in this body so everyone can say what a terrible, useless person the dead man is and what a burden it is on poor Stefan to be in his body because this show has all the nuance of a sledgehammer wielded by a Donald Trump supporter.

One good thing that does come from this is Stefan admitting, after so many seasons of this show trying to present vampirisim as a curse, that being human sucks and is full of pain and suffering and awful and he wants his super powers back again.

By the way Alec is also involved because… actually I have no real idea why. Mainly so he and Valerie can moodily compare notes about how Caroline and Stefan would much rather be together than be with them. Angst angst woe woe I don’t care.

Also, Matt is not dead. Still.

Damon is still trying to hold onto the crown of self-loathing telling everyone what a terrible person he is and kind of missing the fact that pretty much everyone on this show is terrible and none of them have the standing to throw rocks from their shiny shiny glass houses. He’s found Stefan’s body, now occupied by a not very friendly but definitely more fun (not hard to do), serial killer who heads off to Tennessee for some slaughtering. Damon leaves that little issue to Valerie and Alec to clear up (along with Rayna who escapes and now wants to go around and stake all the vampires who escaped. This would have been much easier if she’d done this in the first place rather than relied on the damn Phoenix Stone torment thing). So I think we can expect a race to find the serial killer while he merrily kills people

He’s already started merrily killing people which Damon doesn’t care about despite him wasting so much of my time and tolerance talking about what a terrible person he is. Really, Damon, if you want to try and sell all this self-loathing to me you could try, y’know, actually being better? Just a little? Just for once? Maybe?

Damon does manage to rescue Stefan, alas, so we can have round #9679585765 of why Damon is such a terrible person and a terrible brother and how Stefan is totally cursed with his presence because he’s so saintly.

Why did Damon rescue him again?

Bonnie is still missing. Do you know why? Because Valerie. So long as Valerie is around providing magical services the rest of the cast doesn’t need Bonnie to be their pet servant witch. And when she isn’t there being useful to them, none of them care about her, her life or even spend a moment to think about her. I would say this period of absence really makes this obvious, but that would imply it wasn’t already bloody obvious by now