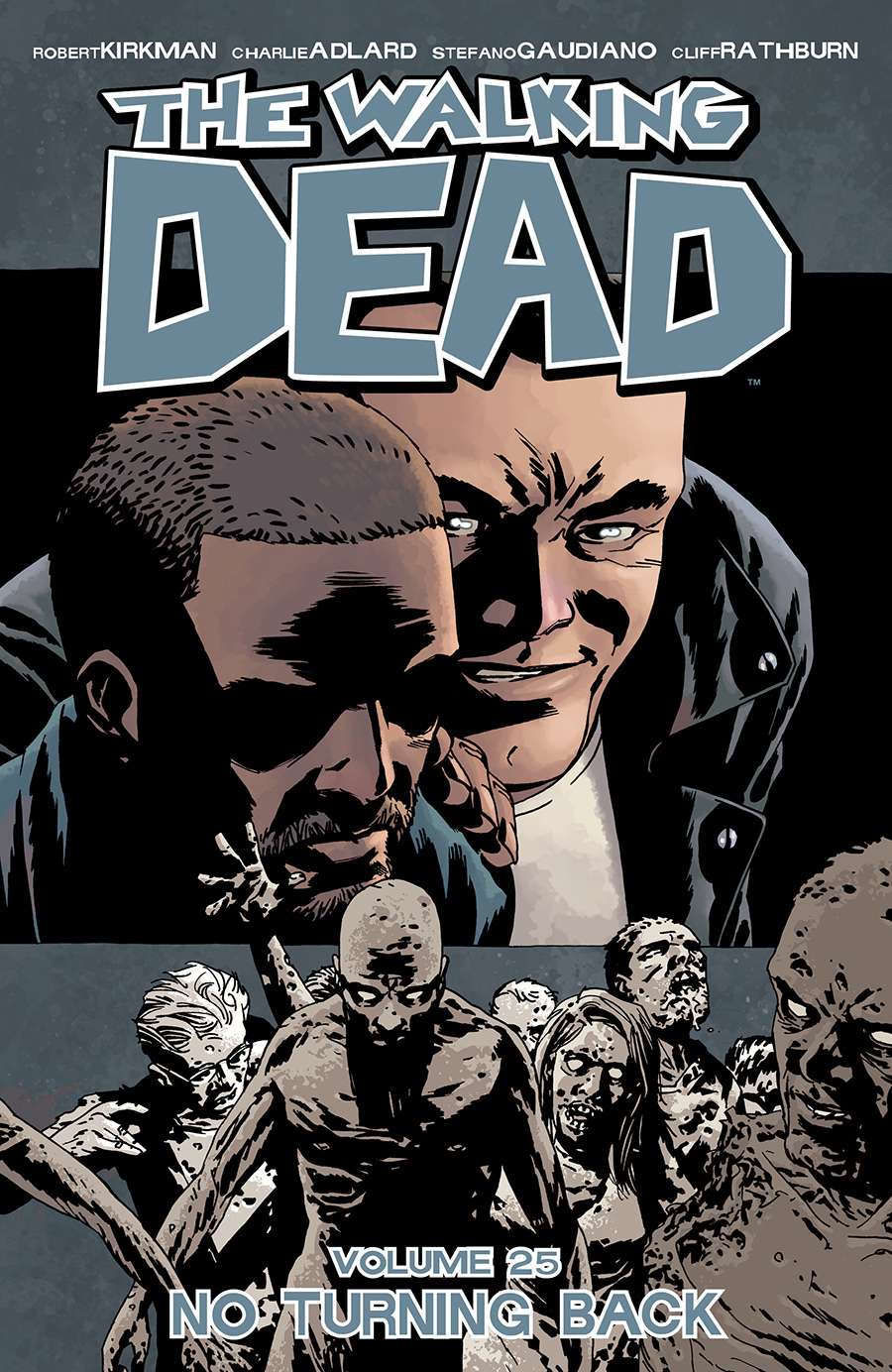 When we last left the survivors they had discovered how the Alpha of the Whispers decided to mark the boundary.  Not so long ago, an over confidant and certainly younger Rick would have seen this as a call for war and ridden out for battle, no matter who tried to talk sense to him.  Rick's impulsiveness is in part how he ended up in so much trouble with Negan, because he didn't know the size of the force he was facing. Rick isn't that person anymore but that doesn't mean that people who are reeling with grief won't demand their pound of flesh.

When we last left Rick et al, they were learning exactly what the Alpha meant when she warned them that she had set up a boundary between their lands.  Michonne is beside herself and immediately attacks Lydia who pulls a knife.  Carl's response is to pull his gun and aim it at Michonne.  Look, I know that Lydia is Carl's first but it seems to me that he is willing to risk a lot in order to be with her. How long as he known her again? Yeah, that's right, a New York minute.  Michonne regains control and releases Lydia.

Off to the side, Rick confers with Andrea.  His first thoughts are about the possibility that he will lose his leadership position.  What?!  The one thing Rick has always been sure about is his position in the pecking order.  It's telling that even as he is facing the heads of so many of his people, his first concern is power and not revenge or justice.

Once Rick tells the residents of Alexandria and all of those who gathered for the fair about the deaths, the rage quickly boils over.  Eugene in particular wants vengeance and points out that they have power because they have Lydia.  Rick is adamant that Lydia cannot be used as a tool vengeance because she's just a child and not responsible for the actions of adults.  Eugene is not trying to hear this at all.  Rick is forced to send away Andrea, Carl and Lydia in order to protect Lydia. The old Rick would have been suspicious of Lydia, but he doesn't bother to even question her and instead claims that he is putting his trust in Carl.  Rick just assumes that because the Alpha handed her over because the Alpha couldn't protect her and that Lydia wasn't in on this.  I'm not saying that Rick has to torture Lydia but he could at least have gone through the motions of questioning her.

After not getting an immediate response from Rick, the people turn to Maggie.  Maggie showed her grit when she chose to execute Gregory, unlike Rick, who still has the Negan imprisoned.  People feel that Maggie will handle things.  Rick of course has to call Maggie out for her decision. How dare she decide to make a decision counter to his beliefs in the community she runs.  Maggie gives Rick an old fashioned ass kicking and it is a thrill to see.  Maggie is not about to answer for her decision to Rick the almighty saviour. Jesus has to separate Rick and Maggie and they end up making peace. What irks me is that Maggie then falls right back into her subservient roll of supporting Rick and assuring everyone that Rick will come up with the right answer.  It seems that Maggie is only allowed to be a little bit rebellious.

When Michonne comes for Lydia, she and Rick have a nice long talk.  I think that this is important because in recent issues, we haven't seen a lot of Rick and Michonne together. Rick admits that he's happier with Andrea than he ever was with Lori and this is a tough thing to admit because to get to this point, both Lori and his infant daughter had to die.  Rick tells Michonne that the pain, loss and guilt that she feels will always be with her but she consider herself even for giving her daughters to her ex because she paid for that with the loss of Ezekiel.  How does that even make sense?  How the hell is that supposed to be comforting? How does that teach Michonne a lesson about walking away from people for fear of loss and guilt?  I think Michonne needs to find someone else to talk to about this.


With his back up against a wall, and Andrea, his closet confidant gone, Rick actually turns to Negan for advice.  At this point, I think that Negan is a far more interesting character than Rick.  Negan suggests that the best thing for Rick to do is to make his people feel safe.  This doesn't necessarily mean entering into a war that he's unprepared for but it can mean lying to his people to keep the peace.

On his way home, Rick is attacked by two residents of Alexandria.  The plan it seems is to scare Rick enough into taking action because they are tired of his platitudes. Rick pulls his signature move and bites one of his assailants neck, thus killing him while the other runs off in a panic.  What does Rick do, well he sends his weapon Michonne off to gather up the offending party.  Rick decides to address the people and gets to show how magnanimous he is by forgiving the person who tried to kill him.

Rick's big plan is to form a standing military so that they will be able to deal with threats like this. He feels it's time to make use of all of the ammunition that they've stockpiling since Negan's death.  The people of course celebrate this announcement.  It's interesting that while Rick doesn't forgive Negan and finds him to be disgusting, Rick's not above using his advice.  It takes time to gather and train a military strike force and this will allow Rick time to figure out a plan on how to deal with the Whispers, without just running in blind, while at the same time making his community feel safe.  It's brilliant quite frankly.

As for the Whispers, the Alpha is mourning the loss of her daughter.  It seems that while the Alpha knows that sending her away was the right decision, that doesn't mean she doesn't miss her or isn't worried about her safety.  Pause for one moment.  The Alpha was allowing Lydia to be raped on a regular basis and now she's worried about her safety? Say what now?  When a member of the Whispers finds the Alpha crying her response is to kill him cause dead men tell no tales and then claim that the man challenged her to cover up the murder.  One thing is certain, the Alpha is a complicated character.  I know that this is leading to her defeat regardless of how reticent Rick currently is and this makes me sad because when it comes to female leadership The Walking Dead universe has an abysmal track record.

Rick and the Alpha aren't the only leaders going through crises.  It seems that Dwight, the leader of Saviours in Negan's absence has had quite enough.  He doesn't want to deal with the expectations of his people and he is reeling from Sherry deciding that they're through. Laura decides to convince Dwight to stay, pointing out that the remnants of the Saviours will simply try to break Negan out if he leaves because they don't trust Rick.  Dwight however is past the point of caring.  I'm fine with Laura trying to convince Dwight to stay and I'm fine with her suggesting that maybe Sherry didn't deserve Dwight because she quickly chose Negan over him.  What I am not fine with is Laura calling Sherry a "cunt" twice.  There is no need for this anti woman language.  The fact that Laura clearly cares for Dwight, so much so that she's willing to ride off into the sunset with him doesn't make it in the least bit appropriate.

Clearly, No Turning Back is about setting up the story for a big confrontation with the Whispers; however, it really didn't feel like anything is accomplished.  This volume is nothing more than a place holder.  Rick spends most of his time running around telling people that they cannot rush into anything, without making any concrete plans on how to deal with the messed up situation that Carl, yes Carl got them into. The one thing No Turning Back did establish is just how fragile the peace Rick values so much is.  Rick and Maggie came to blows, Rick was forced to turn to Negan of all people for advice and Dwight took off, putting the alliance with the Saviours in jeopardy. Rick may not be able to hold everything he holds dear together on just the strength of his will anymore.