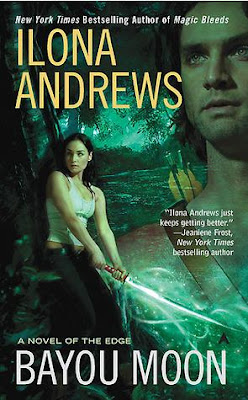 Cerise is trying to protect her large, poor family clinging to existence the Mire. This section of the Edge has long been used as a dumping ground for the Weird Kingdom of Louisiana – and is now used as another stage in the brewing cold war between Louisiana and its neighbour

Which is where William comes in, dragged back into fighting for Adrianglia‘s secret service, The Mirror. He thought he was free of them – but the offer for revenge and to protect children like himself is too much to pass up.

Particularly what I love about this – beyond the magic system, the world (with both the magical world of the Weird and the Broken and the Edge straddling the pair, eking out an existence between the two, helpless to be part of either and often suffering from the manipulations of their dominant neighbours), the creatures, etc is the way this contrasts with the last book in the series. It would be easy to just say “the Edge” has the same culture – or even to have the Weird just be our world with magic added. But we have different countries in the Weird with different technology, different cultures, different principles and specialties. But it’s the Edge that really shines here – because we have the same theme of low resources, extreme poverty and very localised society governed by ad hoc courts, local militias and constant feuding. It’s the same basis to both societies – but the larger Edge near Louisiana and the very different ways that The Weird Louisiana treats the Edge here – the Mire (a place to dump exiles) as well as the extremely dangerous swamp creates a very different cultural sense. The same rough land with similar themes but with a definitely different culture.

This also has Cerise sharply contrast with Rose. Because her family has powerful magic and numbers and connections she has many advantages that Rose does not. But all those connections and magic means she has less options – being mired in the feuds means she cannot isolate herself from that greater society, her family’s magic makes it much harder for her to cross the boundary. It’s interesting that we can take, ostensibly, two women in very similar situations (young but with high responsibility, beset by powerful outside forces, helped) and still have very different pressures in their lives. It’s the same story told very differently.

And told very well – lots of action, excellent pacing, excellent conflict and awesome female protagonist who isn’t perfect, is sometimes overwhelmed but is still very strong, determined, intelligent and ready to step up way above her comfort zone because she has to – all with a very strong confidence in her skill and prowess.

I like her a lot. And she stands in a family with other intelligent, brave and capable women as well – whether her scientist aunt or her, frankly terrifying, grandmother (I have a soft spot for little old ladies who terrify everyone around them. Especially an old woman willing to chew out an evil necromancer for not saying hi to his granny).

This book has a romance. Of course it has a romance. However, it does lack in a lot of romance tropes, in particular romance not being the actual focus for the characters. While it certainly flares up especially towards the end of the book, for the majority of the book is not about the romance. For the most part Cerise and William work together – sometimes antagonistically and reluctantly (because nothing says true love quite like hating each other first) – towards common goals that have very little to do with how hot they find each other. There’s even very little “zomg so hot so hot let me describe how hot!” every five seconds which I definitely appreciate. In some ways the romance feels almost superfluous – not because it gets in the way of the plot but because the plot doesn’t rest on it at all – which I really appreciate.

What I appreciate less is William’s careful reminding of himself that touching women without their permission is so wrong. Obviously that’s not bad – but the fact he has to remind himself so clearly is troubling; it’s supposed to show that William, as a werewolf, is dangerous and animalistic but I still don’t particularly appreciate being expected to follow a love interest who has to carefully remind himself that rape is bad.

William one of the main characters, is White. And our protagonist, Cerise… she is described as:

Which certainly sounds like she is a woman of colour or could be. Is it adamantly depicting a WOC to an extent she will definitely be read as non-white given the pressures of the societal default? I am less sure. Other POC are more background. The head of the Mirror – a major spy organisation – is a Black woman (but that’s a little promoted to obscurity)

There are no LGBTQ characters despite a large cast, sadly.

While the diversity isn’t as much as it could be or I’d wish – the story, the world and the writing remains everything I always expect from this author. It’s exciting, well paced, layered and with an incredible world.