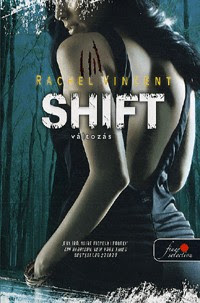 Until a new threat appears – Thunderbirds. None of them are used to fighting the birds and they scrabble desperately to find some way to stop the assault

As ever, Faythe and her fellow tabbies are prime targets.

This book has opened the world building of the series a lot more to include another of the shapeshifter creatures that occupy this world. The Thunderbirds

It would have been really nice if “Thunderbirds” actually involved even a shred of Native American mythology beyond just the word. Instead it just means “werebird”. Actually, given the “spicy latinos” of the first book, I think I’m leery of wishing this book includes more than its two token latino characters.

The werebirds themselves are relatively interesting – especially since they seem to show a very different culture which should, really, be a wonderful challenge to all that is wrong with werecat culture. It’s not patriarchal and it’s completely non-hierarchical. I also like how they’ve adopted a level of avian nature into the shapeshifters with things like carrion eating. One of the many complaints I’ve had of the werecat world building is how it has failed to really establish them as cats (like they keep going for “runs”. Cats play in many ways, but they’re not wolves, they’re not endurance runners)

While the world building of the Thunderbirds is interesting and I’d actually like to see more of this new society, the plot is just a bit meh

Similarly the werecats inability to come up with any strategy to fight back seems equally dubious. All they did was cower inside, completely unable to fight back against a Thunderbird strategy that seemed limited to picking them up (sometimes needing 2 birds) and the dropping them. On top of that we had an equally dubious decision for Faythe and Kaci to go running off virtually unguarded for their own safety

This is a classic hallmark of dubious decisions pushing a plot that has a gaping hole in it. This whole decision is there to keep Faythe centred on the plot line rather than find a more obvious solution that actually makes sense but doesn’t involve her (like call in other pack members and telling them to come with guns).

Another significant portion of the book is consumed by a ridiculously tiresome love triangle which has designated-love-interest-but-not-really being eternally distracted by the need to rebel and arm wrestle Mark. It consumes a lot of pages and really shows that he’d make a terrible Alpha simply because he cannot focus on the task at hand

Like with the last few books I have to return to how this series is ruined by the awfulness of the first book (and, to a lesser extent, the second). The thing is, while I think there is a considerable amount of author regret over that book, there’s no real walking back what happened in that first book and the context of that continues on.

One of the most galling of which is the continued comparison of Faythe to Kaci (I think there was even a deliberate choice to give them unusually spelled names to emphasise the similarities). Kaci is in the same position that Faythe was in book one – rebellious, determined to insert herself while everyone (Faythe included) tries to shelter and protect her. She is even hunted by ALL THE THINGS because she is a Tabby and that’s basically what this entire world is built on – precious objects-who-are-not-people

But Kaci is 13. A child. As such a level of sheltering and making decisions for her is to be expected because childhood. Faythe wasn’t. Faythe wasn’t a child and, while her tone was generally annoying, her wishes (to go to college, have a boyfriend of her choosing) was not unreasonable or childish. But that is now how her actions in the first book are represented. Faythe, a woman making her own decisions, was a childish rebel who needed to grow up. And now she has. And that is terrible framing

Which is why I’m also taking back the whole idea that the later books are better because Faythe is now giving advice, having ideas and being respected by her fellows. Yes, totally taking it back. Because while it’s all true the ONLY reason this is the case is because Faythe has made the MAN APPROVED DECISION. This can’t be stressed enough – in the first book she was shamed, infantilised and imprisoned. She is now “respected” but only because she’s completely given up on everything she wanted in the first book.

Coupled with the ongoing problem of Kaci and Manx being little more than items to be owned and controlled, we still have several problems with the depiction of women. We have Faythe’s mother sort of stepping up – it seems to be a book thing now for her to stand up, make a pretty speech- which is, yes, admittedly kind of awesome and strong. And then she fades back to the kitchen. We’re told that she’s a leader and a force to be reckoned with but we only get these tiny events which do less to reinforce this than suggest the author has just remembered she’s supposed to be a major force. And, apparently, the only female werecat who is.

I have to say this book series has managed to come a long way from the depths of the first book – but it hasn’t been smooth and at least some of that has been avoiding the issues. A lot of the misogyny of the “good” werecats has mellowed – but only because Faythe is now on message. The terrible racism is no longer apparent – but only because we no longer have South American werecats as antagonists. In some ways it feels like these problems have gone simply because everyone is walking around it and Not Talking About it. Sadly even with this improved, I simply don’t find the book very fun. The plot is too weak and driven by dubious decisions, distracted by a love triangle and poorly paced for me to really enjoy it.