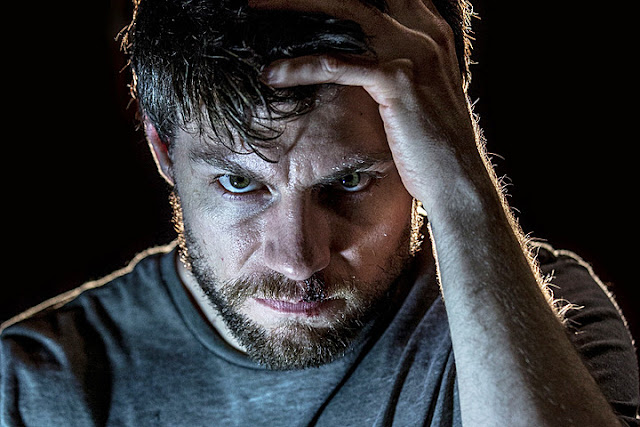 Megan is now possessed and terrifying Amber and Holly

Far worse, she is poking her dead husband in the EYEBALL

Finger in the eyeball here, people! And it’s really realistically done?! Really Outcast no-one needed to see this! No-one wanted to see this!

Honestly and I thought the House of Night would be the worst thing I’d have to endure for Fangs for the Fantasy. I hope you all appreciate my enduring of eyeball poking

Anyway, Anderson and Kyle rush to the rescue and find Megan missing. They dump the kids on chief Giles and his wife Rosie (along with the duty to cover up Mark’s death because reasons) and now they need to find Megan

This starts with another excellent moment challenging Anderson’s eternal awfulness. Despite being at this for so long Anderson knows NOTHING about the beings he’s facing. The best he can come up with is “they’re afraid of the cross”. Well, yes – because a demented preacher is screaming at them and shoving it in their faces.

Kyle makes his opinion on this known – and goes looking for Megan without him. Because Anderson is worse than useless – he is so completely stuck on his own narrative of what’s happening that he’s learned nothing. He doesn’t know anything about the beings because he is fixated on the Biblical interpretation of demons. He can’t conceive of anything beyond that. It’s all demons, devils, demons, end times, demons – which is why Kyle leaves him behind. He just cannot trust Anderson to be remotely sensible.

Really? Really? I get some teenaged rebellion. I get this kid hates the town. I get that he’s hanging around with Sidney because it pisses Anderson off. But child kidnap? He’s going to go that far

Speaking of – Kat Ogden has set up a whole rehabilitation facility for new possessed. This, along with Megan stumbling around – has really emphasised what Sidney said as true. The new possessed are not exactly violent or evil – but they are utterly overwhelmed and confused by their new situation. It’s excellently shown and, again, kind of shows how wrong Anderson is.

But Aaron brings Amber to this rehab – and Kat’s husband is also fine with child kidnap? Really? Really really?

With Amber kidnapped, Sidney manages to convince Kyle to put a bag over his head and be driven to the same site where he is locked in with Amber. Sidney wants to keep him around until they “need him” for whatever ominous purpose that is.

He also says they can’t stay wherever it is they came from… and that Kyle is from the same place.

And maybe not just Kyle. Because when Anderson shows up to the rescue, Megan is exorcised… by Amber. Hereditary exorcism!

Megan is now human again – and has to be told about Mark. Ouch

The show kind of treats this as an ending of sorts. So Kyle, at least, is willing to leave the rehab warehouse of possessed alone to continue their work. Instead he wants to go on a road trip with Amber… though we close with a squad of possessed lurking around them

While Anderson, following his usual terrible decision making, decides to burn down the house Sidney is living in. We see a figure inside… but the next day we see Sidney up and around while Aaron is missing

Anderson, how did you not predict this? He is the worst

And with this being the last episode of the season, I think this is the underlying story which I think has really made this show. We could have had a very very clichéd story of demons and possession, the whole Exorcist turned into a tv series… and it would have been so tiresome. Instead we start with that opening – and a whole lot of gore – then we have this excellent switch with Anderson clearly being wrong. Even being a liability. It’s a wonderful challenge of all the assumptions I made when the show started and entirely how the show seemed to be heading. I’m not normally fan of mysteries without answers, but this has really made it so much deeper than stories we’ve seen before. I’m intrigued now.

In terms of inclusion we’re on shakier ground. We have no LGBTQ people. We have 3 POC – 1 is dead. And all three are kind of servile – there was the nice neighbour who basically existed to lend Kyle his car and provide exposition for the past. Then there’s Giles – I mean he has nice moments commenting on the racism he faces, but for the most part he’s clean up squad. Even the almost-storyline of Ogden never really went anywhere. At least not for Giles, he just kind of let it go. And Rosie is just an extension of Giles. This is not exactly meaningful representation

And women… now Megan has been an awesome character for so long. She’s strong and determined and sensible, she is often the voice of reason to all those around her. I think that can be a problem since women can often be cast as the sensible one/caregiver while the men go off and do, well, silly things. But she has definitely been a dominant character in her own right. But, as I said last episode, there does seem to be a definite pattern of women being targeted on this show.