Wrong Side of Hell (Deathspeaker Codex #1) by Sonya Bateman 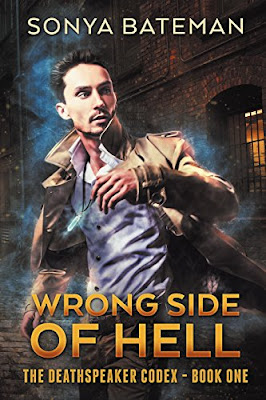 But even he wasn’t prepared for the corpses to talk back, a werewolf stalking central park and finding a whole world of Fae, magic and more

And a team of hunters dedicated to wiping them all out – and ready to use him to do it.

This book has a lot of wonderful elements I always love.

We have a very wide world of various supernatural creatures – with lots of hints of complex cultures and histories and different interactions which is definitely something I look for. There’s also a lack of info dumping (though that may be due to other issues later)

I really love how the werewolves are linked to moonlight which is a really original touch which I always appreciate. And bogeypeople? I love the bogeypeople. That’s a scary addition to the supernatural menagerie of this world. It’s fun, it’s broad and it has vast potential.

I also like the twist of the bad guys, the fear of the power they have not from just money and resources – but their knowledge of the supernatural. Normal humans who are determined to figure out every last weakness of the supernatural are considered utterly, unassailably powerful which is definitely different from what I’ve read before

The pacing of this book barely pauses for a second. The action starts very early, there’s very little delay or even introduction before we race into the story. We have lots of action, lots of information and this huge wonderful broad world to absorb as soon as possible. It’s a book that quickly drags you in then has you sprinting none stop all to the end.

We do have a little bit of a Chosen One scenario – because there really is no real explanation for why Gideon has the world changing super woo-woo. To say nothing to the pretty terrible magical-world-building of having Gideon master impossible-for-him-faerie powers with the power of imagination. I generally like Gideon a lot, I like his attitude, his humour, his resilience, his determination and the fact he’s been outspoken without being ridiculously foolish and annoying with it. But super powers just ‘cos is never something that I’m a fan of.

I do think this book was perhaps a little rushed in many way which, in turn, made some elements of it far too hurried.

Shot him. With a gun. A real gun. Not an air rifle. A gun. Isn’t that just… a bit too quick and extreme? And why is he afraid of having an actual address to hide from, what, 3 poor hunters who kill animals? What, they have access to FBI databases or something? They’re going to hunt you down and shoot you with rifles in New York City?

A lot of the character development, relationships between the characters and even the world building and backstories felt very rushed and not what they could be – I think this whole book would have benefitted a lot from being divided into a trilogy. It would have allowed us to explore the culture and nature of several of these supernatural creatures – the werewolves, the fae of all kinds, the Boogeypeople and… whatever Denei and her brother was. Ill-defined voodoo creatures? I think more time for Gideon to get to know Sadie and Taeral, to learn about the world, even see him be a human body collector and to establish his relationship with Murdoch would all be much better. Or even some explanation about why the bad guys have the numbers and resources they do. Or why they have the powerful game-changing ally they did

This is a fairly long complaint but I think the point to make here is that its a complaint that the book, its world, its story is very very good, that I desperately wanted more of it and it really needed more attention than it was given.

Diversitywise we’re not in a great place for inclusion. Part of this is lack of detailed description to make it clear whether someone is a POC or not. What we do have are Denei and her silent brother who are strongly coded as Black. I still have no idea what supernatural creatures they actually are except they’re sinister, vicious, vaguely animalistic and involved in voodoo-like magic. So in terms of what they are it may be just “dubious walking Black woo-woo stereotypes”? I mean they’re not expressly labelled as such, and they do live and they are on team Gideon (sort of) but still.

There are no LGBTQ characters. Taeral has one arm and is disabled – however he also has the woo-woo arm of perfect replacement meaning it’s never actually relevant.

Sadie is a powerful character – capable and strong. She is kidnapped, but she is valued and never weakened. I think they’re heading towards a love interest status but, unlike everything else in this book  It’s a shame that other female characters in this book – especially the pathologist who seemed like she could have been a lot more.

But like everything else in this book – it just needs more time to develop.