The Women of Zoo 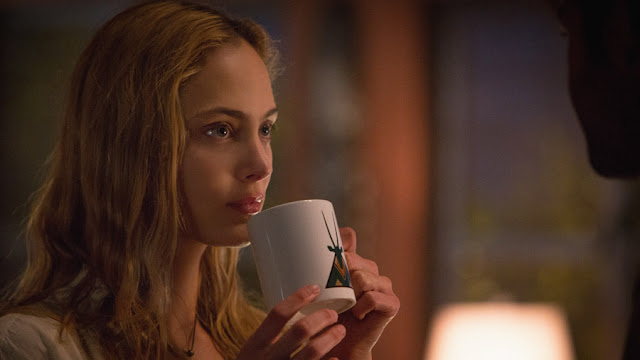 
But at the same time, if someone argued that Chloe, Jamie and Mitch were co-protagonists as important and central to the plot, I wouldn’t agree with them but I would concede they have a point and wouldn’t laugh at them cruelly (now if they claim Abraham was? Maybe).


Unlike so many of these shows where a cishet, white man simply must lead us all to safety and freedom, Jackson’s efforts are matched by his colleagues and that includes the women (this shouldn’t be shocking. But, alas, it is). Chloe is clearly established as the leader. She is the one external agencies turn to. She is the one who controls all the resources. She is the one who decides where they go and why. It is her influence and connections that gets them to see powerful high level officials. She’s the boss, it’s undisputed and no-one even really tries to challenge it.


And Jamie? It’s her dogged research that drags a reluctant and unhappy Mitch on board. It’s her skills as a journalist and researcher that find them many answers, and her drive that certainly helps contribute to the group. In no way can she be considered a shrinking character and her efforts are frequently integral to the plot line going forwards


It really looked like this was going to be a show where the two women would step up alongside the men and be equally as important as their male co-stars. I was hopefully


As the show progressed we, sadly, saw this potential crash and burn rather messily. This is really epitomised by Chloe


Chloe was the leader. Oh, she started the first episode as a fleeing victim in Botswana, but she quickly stepped up. Chloe was the one with the resources and the influence… and it was all taken from her. Her influence turned out to be a long plot from Reiden Global. Her resources was their money. She had no official authority from the French government - or any government. The very essence of what she was, the role she fit in the group, was destroyed. She was the legitimacy, the authority, the one who was in control - and it turned out she controlled nothing, led nothing and didn’t even bring resources to the fight.


If this were a DnD team, Chloe just became the Cleric who forgot how to heal.


The revelation not only destroyed her role in the group, it also destroyed her expertise. Ultimately, Chloe is a spy. She’s an intelligence agent. She’s supposed to judge people and decide if they’re suspicious or trustworthy. She’s supposed to be able to expose conspiracies. This is who she is, this is what she does. Just how bad is she at her job?! Added on to that, the fact her sister was sleeping with her boyfriend just confirms that this is “spy” is absolutely incapable of discerning when people are lying to her! She even has an angsty moment with Jackson where she bemoans just how terrible she is at her job
She’s right. She is. She really is.


In the aftermath of this, it’s Jackson who steps up to lead. It’s Jackson who makes plots on where to go next. It’s Jackson who has the plans and ideas and it’s even Jackson who manages to source resources to get them out of the US. Everything Chloe added to the group is co-opted by Jackson while she is reduced to… love interest. Love interest and terrible decision maker (from not realising they were being played to convincing Jackson he should keep his mutation a secret, this woman has never EVER made a good decision right up until her death. She is a trainwreck of awful choices which just feels like an excuse from the writers to depower her). She remains a glorified love interest until her death. For Manpain.


What’s telling is that despite the problems with Zoo the television series, it’s a vast improvement on the source material.  Just as in the show, Chloe and Jackson meet when he saves her a group of crocodiles and from there, they develop a relationship.  Chloe never remotely blossoms into the character that she does in the show.  Despite having more education than Jackson, she’s more than happy to play the woman behind the man, in an almost state of dependency. Chloe never even becomes realised as a person because all Jackson can talk about is her beauty.  Chloe has a history of panic attacks and anxiety and so when placed in a situation of high stress, Chloe completely shuts down, leaving Jackson when he is present to become the man of action.


Unlike Chloe, Jamie isn’t killed - but her character is still pretty much destroyed. In the first season Jamie ends up killing a crooked FBI agent. While this could be her being strong, determined or even facing some severe moral conflict, the main actual purpose we see of it is to turn Jamie into a huge distraction and liability. Keeping Jamie with them means they all become fugitives, they all have to take much more elaborate measures to get around and be functional. She is the millstone around their necks, creating a new enemy and many diversionary plot lines as the gang (well, Jackson) has to think up ways to get around Jamie being a felon.


We also see a marked reduction in what she brings to the group. With the show rapidly dropping the idea of a corporate mystery (because this show discards plot lines like a catwalk model discards outfits) we see less and less use for her expertise - research. Much like Chloe, her role in the group is reduced, devalued while Jackson and Mitch (animal expert and vet) and, to a lesser extent, Abe (fighter, confidante and streetwise advisor) see the knowledge and skills they bring become increasingly more vital. Inevitably, Jamie becomes more and more of a sidekick and hanger on simply because she’s not useful


The show further separates by literally pulling her away from the group for a large chunk of the second season. While the gang are trying to navigate the drunken madlib that passes for a plot on Zoo, Jamie is having a chilly nature hike through frozen Canada. All she manages to do is unwisely (oh look at those womenfolk making the terrible decisions again) befriend Logan


And she needs to establish this friendship/love interest/competition because, like Chloe, potential love interest becomes pretty much her only storyline. The tension with Logan. The rift between her and Mitch. Her storyline now is to lurk in the corner being grumpy and mentally compose bad poetry about why they’re all doomed and occasionally snipe at Mitch, her designate love interest.


Jamie could be removed from this show entirely and it would change nothing. And that is indictment of how devalued her character has become


Of course with the second season we have two new female characters. First we have Alison or, as I think of her “Damn Myka, you’re too good for this.” Who is basically Chloe #2. Or Chloe’s wallet anyway. With them back as fugitives again they needed resources, they needed some level of official legitimacy… and in swoops Alison. Here have some information, have some influence and here’s a shiny science-plane-lounge she just happened to have lying around because of course she did. What skills does Alison bring to the group? She doesn’t - she brings THINGS. She brings shiny toys. She brings information - but expertise?


Unsurprisingly, yet depressingly, even her storylines revolve around her relationships with men: pretty much entirely with her step-son/lover Mitch. Does she have any other role or storyline? This is one of the most reductive tropes of the depiction of women - they exist only in relation to men. And it’s deeply sad to see Zoo resort to this with a cast that had such potential


And her inclusion forced me to type “step-son/lover”. Thanks for that Zoo. Where did I leave my brain bleach?


Finally (beyond bit, sacrificed characters like Eleanor who, again, was terrible wasted potential) we have Dariela. Again, belatedly introduced so unlikely to have the same impact as the rest of the cast, she was dropped into the group to a huge amount of hostility to an extent that much of the early episodes with her pretty much only involved her when we were seeing the other characters dislike her. Only Abe really saw any good in her (and Abe would see good in a serial killer because he’s a deeply improbably saint of a character). Worse, as she was beginning to overcome that hostility, like Jamie, she was separated from the main group. This is even more sidelining for a character that is so newly established - she was not given a chance to become part of the group and the plot before she was torn away from it.


That’s a really nice conflict to have, especially as we’ve said before that a Weapon Does Not Make a Strong Female character. But I also think we need to look at this in context. I’ve already said part of the problem with Chloe, Jaime and Alison is they lost/lacked any kind of role in the group where they brought expertise. Dariela doesn’t want to be a killer/weapon - fine. So what else does she bring? What is her role?


While there are many problems with the depiction of women on this show, this is the core. The women are not useful. The super hero group does not need a Hawkeye. This DnD group doesn’t need a bard. This team to save the world doesn’t need three women who just exist while the menfolk do their thing. This also emphasises that you don’t need women in fridges (though we see Chloe there by the frozen peas), misogynist slurs or overt sexualisation or dehumanisation to create a sexist narrative. Far too often, the simple role the characters serve in the plot, their purpose and what they’re able to do is just as damaging a depiction.
Posted by Sparky at 9:00 AM