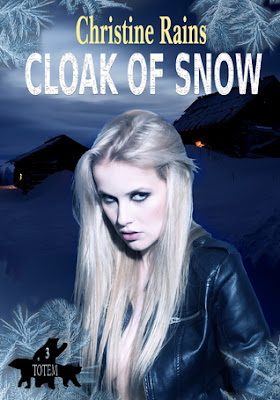 Saskia and her sisters are desperately trying to find the lost pieces of the totem pole which could have dire consequences for all shapeshifters if it is not found.

So when she and Sedge, the Reincarnation of the Great Bear Spirit come across a native village under attack due to the totem’s magic. They have to fight to protect them – but Saskia is worried about being pulled back in under Sedge’s influence.

I really hate these two characters together – because a lot of it is the very essence of a destructive romance. On the plus side we don’t actually reach a romance this book – but the whole framework of a romance is there complete with clichéd “I don’t want anything to do with you we’re over but zomg so hawt so hawt” which is definitely a foundation for romance so often.

Like the concept of Taboos – there are taboos people are supposed to follow in accordance with the Inuit beliefs (I don’t know how true this is due to my own ignorance of Inuit beliefs) and while major spirits like Sedge (who is Bear) usually let violations go – when Saskia last broke a taboo he took her to a cave and they had lots of sex… which is a dubious “punishment” to begin with and raises questions of consent. Now she scrupulously follows all taboos knowing he is waiting for an excuse… Waiting for an excuse? This does not sound remotely consensual. Add in her having to meet him in human form – because she would be too submissive to him as a bear.

And yes, she is avoiding that – but there’s no treatment of that behaviour as what it is: nor is there any real challenge of his machinations to bring them back together. Oh she’s angry about it – but they’re not remotely treating it with the severity it deserves and I can feel the trajectory towards the romance with this man who doesn’t seem to have the slightest respect for her.

It’s a shame that this relationship is here because otherwise we could focus more on the beliefs of the Inuit and the creatures we see here which, I presume (again, I can’t stress enough my own ignorance here) which are drawn from their mythology and beliefs and practices. We could focus more on the shapeshifters and Black Shamans and even on the main plot that has been pending now for a couple of books of finding the parts of the missing totem and the consequences (the unspecified consequences) towards all shapeshifters is that happens.

This is similar to what I said about Silent Whispers, there’s a lot of good things here. There are some excellent characters – from Saskia’s conflicted opinions in regards to the Black Shamans to what it means for Sedge to be Bear, to what being a Black Shaman or even a werecreature even means, to more exploration of the creatures and beliefs that populate this book and the previous one. On the one hand I can understand the temptation not to infodump excessively but we’re only getting the bare bones or the plot for the last 3 books. It’s an issue that’s only exacerbated by this world being so interesting, the plots ones I want expanding and the characters and setting being so very different from what I’ve seen in many other places. The fact it’s not expanded seems a shame when that is what makes this series unique. And the romances? They’re sadly pretty typical and not all that interesting.

We do have a number of Inuit characters and the story draws from Inuit mythology (again, I stress that I absolutely cannot speak as to the accuracy or authenticity of this). But they are background characters and deeply subservient, even worshipful, of the main characters.

Sedge is the reincarnation of the Totem spirit, Bear. He speaks Inupiat and is known as Nanuk to the people around him – but there’s absolutely no indication he is Inuit himself (or Saskia for that matter), but his description (with blond hair) it seems unlikely; there is no real clarification at all. There’s an issue with 2 White people playing in Inuit mythologies and especially being honoured and revered as deific figures.

We have no LGBT people. We have other women but really only Saskia and Sedge are appreciable characters this book.

I like this series – but increasingly I like it more for what it can be, what it hints it will be more than what it actually is. Around the edges are excellent characters, excellent world settings, excellent concepts but the centre is a relationship that is kind of dull kind of clichéd and in this case very problematic.