The Adventure of the Incognita Countess by Cynthia Ward 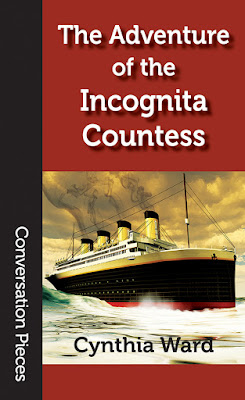 Lucy is an agent for the crown charged to ensure important plans being delivered to the American government actually arrive and don’t fall into the hands of a hostile foreign power: especially as tensions rise and Britain’s new Martian technology is in high demand.

As a dhampire, a half-vampire, she is uniquely qualified for this role – and for vampire slaying. Which is complicated when a vampire joins her on the HMS Titanic – and a vampire that conflicts so strongly with what she has been taught and tempts her away from both her duty and her mission.

Bisexual female dhampire secret agent working for the government in a Steampunk setting that has the feel of both The League of Extraordinary Gentleman and Penny Dreadful pulling in all those Victoriana stories from Martian invasions to vampires and men raised in the wilderness – and so much more. All of it mixed in with real world politics of the time adding some nice intrigue to the story of the supernatural secret agent. All of this world building is nicely hinted at, included briefly but not overwhelming the actual plot and development of this short story.

Of course the bitterness of that is there’s so much of this world building which we could so play with! I want to see it all, the martial technology, the supernaturals incorporated into the world and government agencies and Lucy’s own personal situation and development and growth as a dhampire.

There was also some excellent social commentary mixed in and blended well with the character’s opinions, challenging them without making them anachronistic. Even Lucy – she has a massive class prejudice that is excellently challenged. And even as a woman she has absorbed a lot of the sexism of society, assuming she is the exception – the Exceptional woman – because she’s a dhampire so stronger than fragile human women; only to have that excellently challenged. At the same time she still has to navigate the restrictions applying to women at the time. There’s some subtle poking of what is considered civilisation especially important in this age of empires as well as some denial of racism though there’s only one briefly mentioned POC in this book. We also have a brief look at the ethnic hatred that so consumed Europe at this time (and hasn’t faded nearly enough).

All of this is wonderfully blended into the opinions and lives of the characters there and reflected in the challenges Lucy faces without any convoluted PSA style inserts. And it’s mixed in with Lucy’s only complex as she’s torn between her duty to the government and her mission, her affection for Clarimel and what she has been taught about vampires versus what she can clearly observe and feel. It’s a lot of really good personal complex.

I am left frustrated, yet again, because there isn’t more. More Lucy, more of this world, more of her doing missions among intrigue, war preparing Europe, facing all the creatures of legend, penny dreadfuls and steampunk fame. There is something so terribly sad about an awesome book that ends too soon.