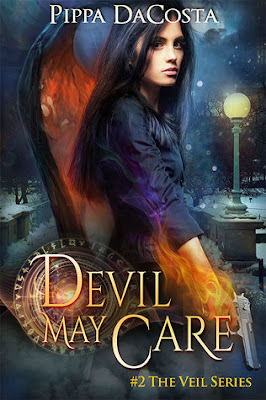 But several Enforcers have been brutally murdered and butchered – and reading the metal confirms the worse: her owner, Damian, has returned. She is not the old demon she was, with the powers now at her disposal promising for a very different showdown. At the same time, Akil, ex-demon Prince is hoping that that same power may elevate him back to his title

And she may co-operate – as he may be the only one who can help her save Stefan from his imprisonment in the Netherworld.

I think the best thing about this book is how Muse has grown and changed and moved. The last book very much looked at her past; how she had been brutally abused and her trying to find herself and pull herself from that mindset. There was the conflict if her realising her saviour was nothing of the kind and the different ways you can be used an abused but different forces.

This book continues on from that – Muse is much more confident in who she is and the newfound power she wields. She’s suspicious, warier and almost comes across as snotty in a Keille Independence, Rebel without a clue kind of way. But it works when we look at her context and her past. Muse is very determined not to give the impression of subservience even to the people around her. Not that she’s completely free from her past – there’s an excellent depiction of how the trauma is still haunting her. The horror of her memories catching up with her, how she desperately tries to resist them haunting her. She’s scarred by her past but it isn’t the entirety of her life. She acknowledges her past, her self-disgust and her internalising the idea she is weak and helpless. It also does weaken her – because trauma isn’t something that is easily cast off in an awesome empowerment moment

I really like how this is balanced with Muse – her moving away from trauma but still haunted by it. Determined not to be defined by it but not escaping it just because she wants to – it doesn’t just magically vanish.

There is a good little examination of both her and Stefan and the organisation that is both exploiting them for their demonic abilities while at the same time restraining them and treating them as inherently dangerous or tainted because of them. It’s a well balanced depiction of exploitation and both needing someone and fearing them. Similarly we see this with the wariness of her colleagues who, at the same time, definitely rely on her expertise.

Her relationship with Akil also continues to be complicated. He does try to use her and exploit her strength and it comes from a very demonic place. He seems to care for her, but simply doesn’t have the compassion or empathy of a human. Again, it’s a decent balance of both showing he cares for Muse, while also trying to use her and while also showing that even with that human emotion there’s a huge amount of alienness there. Unsurprisingly, Muse herself is also really suspicious of him – and I, again, like the balance here of both being willing to work with him (not out of helplessness entirely, but out of confidence and even a willingness to look at him as an equal rather than a superior) while constantly being suspicious of his motive.

While I really liked the personal development of Muse and her history, I’m less thrilled by the world. Well, no, that’s not entirely fair. I love the world – I love the concept of the demonic realm, the powers of demons, their demonic parentage, the veil – but these concepts aren’t really expanded on enough. I think we could do a lot more to examine demon politics – and what major powers like the First actually mean. Who founded the Institute, what powers does it have, what is it doing? What about demons living on Earth? Is the Institute being fair – it’s implied they have an unduly harsh view of demons? There’s lots of things hinted at but we didn’t really address many of them – there’s lots of suggestions of world building to come but we aren’t really getting more than just the labels. I need more, I want more; expand this original world more. This feels very unique, very different from what I’ve read elsewhere and I’d love to see those unique elements expanded.

I had some vaguely similar issues with the plot. I like the story of Muse working for the Institute and her quest for Stefan and then trying to save Stefan and dealing with his own trauma and difficulty in returning to humanity along with a whole lot of danger from a demon serial killer. All of these were very good plots

They were also a lot of plots which, again, I think the world, the characters and the general story would all have been better had they had more time for each one. Muse working with the Institute and the police would develop a lot of characters like Coleman (who was little more than a name to me), the relationship with the police and how the Institute works. This would pair well with the demon serial killer storyline.

Similarly going back across the vile, exploring the demon world, dealing with demons who think they own her and want to control her, working with Akil, finding, rescuing and saving Stefan and bringing him home and dealing with his adaptation to the world again? That’s another excellent story all on its own which could have been expanded and let us meet more of the characters, expand the demonic world and both the world building and character development.

Honestly I want to say I’m being picky – because I am. Basically I’m saying there were so many awesome elements here with characters, world setting and plot ideas that are excellent that I wanted more of them. Without that development I’m vaguely disappointed because there’s a lot of elements that fall a little flat – like the Institute and pretty much every human character. I feel like I’m expected to care a lot more about these characters than I actually do.

Diverstywise there’s no LGBTQ characters at all – there are POC but they’re largely side characters or victims. Stefan is half Asian – but his Asian parent is also his demonic parent so it doesn’t really touch on Stefan much in terms of culture or depiction – or even by his description. Similarly we have 2 demons, including Akil, who use human bodies that look Black or Middle Eastern respectively.