Handmaid's tale and Complicity in Oppression 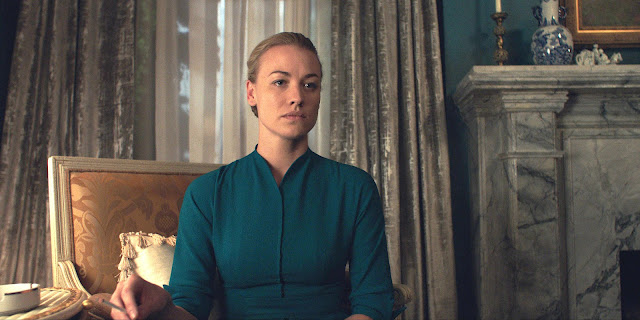 The Handmaid’s Tale is easily one of the most celebrated new shows of 2017 and with good reason. Atwood’s brilliant tale is still extremely haunting thirty-two years ago and if anything it’s all the more relevant in the era of Trump. With Elisabeth Moss, of Mad Men in the role of Offred/June, it was absolutely clear from the first episode that Hulu had an epic hit on its hands. Like many we tuned in anxiously each week to see the story of the Handmaidens come to life and reflect about the fact that the reason this dystopian hit such a strong nerve is because of how closely it mirrored our too real fears about the state of patriarchy and the oppression of women based in religion. Perhaps the most honest truth of The Handmaid’s Tale is the complicity of the Wives, Aunts, and visiting Dignitaries in the brutal rape, murder, maiming and general oppression of women.

The collusion with an oppressor is an extremely important one because it is the reality for every single marginalised group. African-Americans have their Uncle Tom’s and useful fools, and LGBT people have their quislings and Log Cabin Republicans. It was conservative women who put up the largest fight against the ERA.  History is filled with the acts of colluders who somehow thought that by identifying with the enemy it would mark them as different or somehow special. Sometimes, such acts brought the colluder extra privileges, rations or made the difference between life and death.

In the case of the Handmaiden’s Tale, colluding with patriarchal state of the Gilead allows it allows Aunts and Wives to have power over Handmaidens. This power is at best an illusion because a wife is still subject to her husband’s whims and an Aunt can only express power when she is actively suppressing women. At anytime, being female would be enough to have the personhood of an Aunt or a Wife ripped away from them. This power is as fragile as fine china. Wives may have the ability to occasionally influence their husband’s vote or stance on an issue but they cannot have an opinion or vote themselves. Wives may be as equally educated as their husband but they cannot read or even play a game of freaking scrabble. Beyond supporting the state's objective of terrorism, power over the Handmaidens is inconsequential because it won’t change anything substantive in the Gilead. Terrorising Handmaidens is the power that the state can afford to hand over to women and wives in exchange for them being complicit and upholding the patriarchal state. The Gilead is giving this power to Wives and Aunts not because it believes that women should have power but because it supports their rule.

Even though Wives and Aunts are complicit in the oppression of the Handmaiden’s their positions are complicated.  As much as Aunt Lydia for instance is quick to attack Offred with a cattle prod, order that Janine’s eye be plucked out and that Emily be subjected to female circumcision for being a “gender traitor”.  Aunt Lydia sees herself as responsible for girls and is pleased and proud when The Handmaidens conform to her expectations. When the Mexican Ambassador visits, Aunt Lydia is happy to have all the Handmaidens involved - even the ones who have visible signs of the oppressive state of Gilead.  Aunt Lydia’s contradictions however become most clear when Janine attempts to kill herself. Akin to everyone else, Aunt Lydia is horrified by the lies, and false promises Putnam made in order to coerce Janine into sex acts his wife wouldn’t perform.  Aunt Lydia knows that Janine has been wrong and as she sits next to Janine’s bedside, the sympathy is all over her face even though she calls Janine a poor stupid girl.

Then we have Serena Joy who worked behind the scenes to bring the Gilead about. Serena Joy twisted feminism to support the idea that women would be empowered by being at home and raising her children. It’s clear that she didn’t expect this to apply to her and was surprised when she was denied the right to address the council and forced to through out her own damn book. Brick by brick, Serena Joy built her own prison and once entrapped by it quickly found out that knitting and participating in ritualised rape were her duty. The utopia that Serena Joy envisioned for herself and indeed all women quickly became a living in hell upon which she took her frustrations out on Offred/June.

Another element that Handmaid’s Tale got excellently right was showing the different kinds of collusion. Yes there was the obvious collusion of the Aunts in the day-to-day violence they inflict on the Handmaids and Serena Joy’s influence in creating the oppressive society of Gilead - but there’s also the clever inclusion of the Mexican Ambassador. A woman with power and influence, outside of the structure of Gilead - who turns a blind eye. Even while speaking against the terrible treatment of the Handmaids - setting us up for her to step in, show sympathy and actually help Offred and her fellows. But it all turns out to be no more than lip service and when the opportunity comes to actually do something, she stands back. She stands for every colluder who says the right thing, but ultimately enables the very oppression they speak out about: she aids the oppressors by passively refusing to help, even when she can - because it’s easier for her not to. It’s a nice subtle inclusion that excellently shows this more passive form of supporting oppression that is equally damaging

While this collusion is excellently portrayed, Handmaid’s Tale never makes the mistake of confusion who the actual oppressor is and who, ultimately, is to blame for the oppression that permeates this society. Sadly, when addressing collusion, many privileged people unfortunately take this as an excuse to transfer blame for oppression to its victims: just look at the number of people who accused homophobes as being closest LGBTQ people or how quickly they will use google-fu to find that one marginalised person who will totally sign off on their varied and toxic bullshit. This makes collusion a very difficult and often fraught topic to address (and is probably very near the top of the “family discussion” ladder).

But Handmaid’s Tale navigates this excellently. No matter what vile acts, past and present, of the Aunts, Serena Joy et al or the blind eye turned by the Mexican Ambassador - all of this is underpinned, enabled and ultimately caused by male oppression of this patriarchal society. At no point does Handmaid’s Tale blame women for their own oppression in Gilead, there’s no sense of using the complicity of these women to absolve or justify the patriarchy.