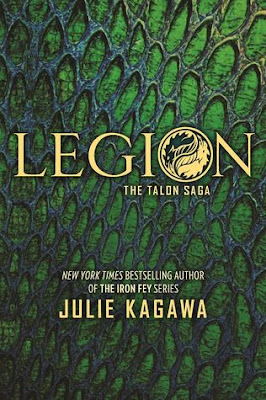 The Talon has prepared for a long time to finally bring down the Order of St George and remove all of their competition to become dominant in the world. They have a Legion

Cloned dragons, without souls or personalities, just automata of dragons designed to fight and die. Finally Talon has numbers: and Dante is the conflicted master of them to unleash them

But behind that the Elder Wyrm continues to have another sinister plan – which directly involves Ember.

Ember is faced with being directly in opposition with her brother, having to protect an organisation bent on her destruction and dodge the machinations of a dragon who has lived for a millennium.

Broken record moment? I really really do feel that this series has really missed a lot of opportunity to properly develop the character of the dragons. We still have Ember and Riley referring to their dragons as if they were separate entity. Again, these characters aren’t weredragons – they are dragons who shift to human form to hide, but their natural form, their real form, is that of a dragon. So Ember struggling with her inner dragon or being conflicted about what her dragon wants, or struggling between her human side and dragon side feels wrong – like a narrative has been cribbed from an entirely different story. What human side? Why does she even have a human side? Why is she even attracted to a human? Why does she even want to do things like kiss? Why is a dragon distracted and pole-axed by the presence of a naked human? Why is a male dragon not looking at a naked woman and not thinking “mammary glands, which my egg laying species has no real concept of. Also, no cloaca”.

Yes, I am making you imagine sexy cloacas. My mind went there, so you have to suffer as well.

I feel this reflected again with the world building – this sense of not quite seeing things through. Like Talon has been designated as The Evil and so it is The Evil. This is the antagonist, so be it.

But, again, there’s so little examination of the reason behind Talon. It didn’t happen because Dragons decided they wanted to be The Most Evil – it happened because the Order of St George was literally driving dragonkind to extinction: and is still trying to achieve this. They’re just the bad guys who need to be stopped

And Talon comes up with a plot to wipe out the Order of St George and there’s so little actual examination of the fact this is an organisation that wants to make dragons extinct. An organisation that wants to kill every character here. But killing the Order is presented as a terrible difficult conflict without any acknowledgement that Talon has a point. I feel like because Talon has been designate as The Evil then no-one’s allowed to acknowledge the grey and the complexity that is built into the very world building of this world.

They go on to even decide to work with Talon to try and save some of them – and again we have a grossly simplified meeting. This is an organisation that exists to murder dragons. The members are recruited from childhood (Gerret has is an experienced solder with them at the age of 17 – and that’s not YA’s love of improbably young people in dubious situations); they have an almost religious loathing of dragons. This is quite literally their reason for being. But actually forming an alliance between the Order and dragons happened ridiculously quickly and easily.

Or the fact that, because of Improbably YA youth, pretty much all the dragons Riley works with are hatchlings and there’s no real discussion of these being children they’re pressing into this war. We want young protagonists so there’s little real questioning of the ethics of this.

This is the problem with the series- the concept is so incredibly creative and original, but the actual execution is so simplistic. Conflicts are resolved without a lot of questioning, the complexity is approached from a very very simplistic fashion but it somehow works out. It all feels very convoluted and that there are large amount of issues and potential plot lines that are being very glossed over while the characters themselves just feel so very flat. They’re basically such cookie-cutter clichés of what they are: from our three main characters (there’s also a side Dick Van Spike who, again, is simple in terms of characterisation) who are more consumed by their love triangle than the greater complexities of their world.

Speaking off – I think the simplicity and general lack of thinking closely about this world and the concept is a moment when Garret needs blood: but the other human there can’t donate because he’s the wrong blood type! So step up Riley – I mean you have a world that openly acknowledges that transfusing the wrong blood type is a bad idea, but you’re ok with GIANT FIERY REPTILE BLOOD. And the same people who were, 10 seconds ago, saying hey, no he’s the wrong blood type” don’t even blink at the idea of dragon blood.

I appreciate some elements – I do like the idea that when presented with a mystical/draconic mating bond which is always dubious from a consent element, that Ember turns round and says, no, actually she refuses to be dragged into a relationship because the woo-woo says so. I do appreciate that – at least if it weren’t presented as another conflict between her dragonic half and bizarre human half.

I really like the action and the pacing- the writing in terms of pacing and theme is excellent. The characters are torn and afraid and worried and outraged and it really comes across well. The fight scenes are really well written, action packed and exciting and extremely fun. Julie Kagawa always writes a great fight scene.

The over all sinisterness and creepiness of the Talon is also on display – but, again, with Dante’s characterisation we have a level of shallowness. Sure Talon is awesomely evil – but Dante as the conflicted Talon drone with ambition just didn’t quite work for me – we needed to see more. But at the same time he probably had the best depiction of any character in this book. His past, his constantly following orders, constantly being the perfect one, always striving to climb the ladder so he doesn’t have to be a minion all the time. It certainly looks a lot better than the insights into Ember’s past where, to be honest, she’s just an utter entitled brat her whole childhood. As I mentioned in the first book, there’s a definite “rebel without a clue” to Ember’s personality. My issue is that it’s kind of presented as a justification for why he’s working for Talon which would be easily explained if we’d develop Talon as something beyond a corporate sinister laugh.

And the head of Talon, the Elder Wyrm, may as well have had a moustache to twirl for all the nuance involved: same with the evil scientists she had working for her.

I also liked the presence of Jade again and continuing the idea that Asian dragons have a very different society and organisation and context that differs a lot from western dragons. It has a lot of potential for future books and involvement. Unfortunately, despite being the only adult dragon, she doesn’t really take the lead or have a great role – only popping up and then disappearing when she’s needed which makes her feel like a convenient plot device more than an actual character. Which is a shame because she’s only real prominent POC that I can remember as well. There are no LGBTQ characters.

The conflict, the world setting, the pacing are all excellent. It’s a very fun book to read with some very tense scenes, some awesome fight scenes and a great sense of portentous terror and bad things about to happen, very much a whole “the world rests on my shoulders” feel. But the potential of this series isn’t being really realised. The complexity of the world coupled with the simplicity of the plot lines and conflict resolution coupled with a flat romance is just kind of disappointing. It’s an Adele – we could have had it all.