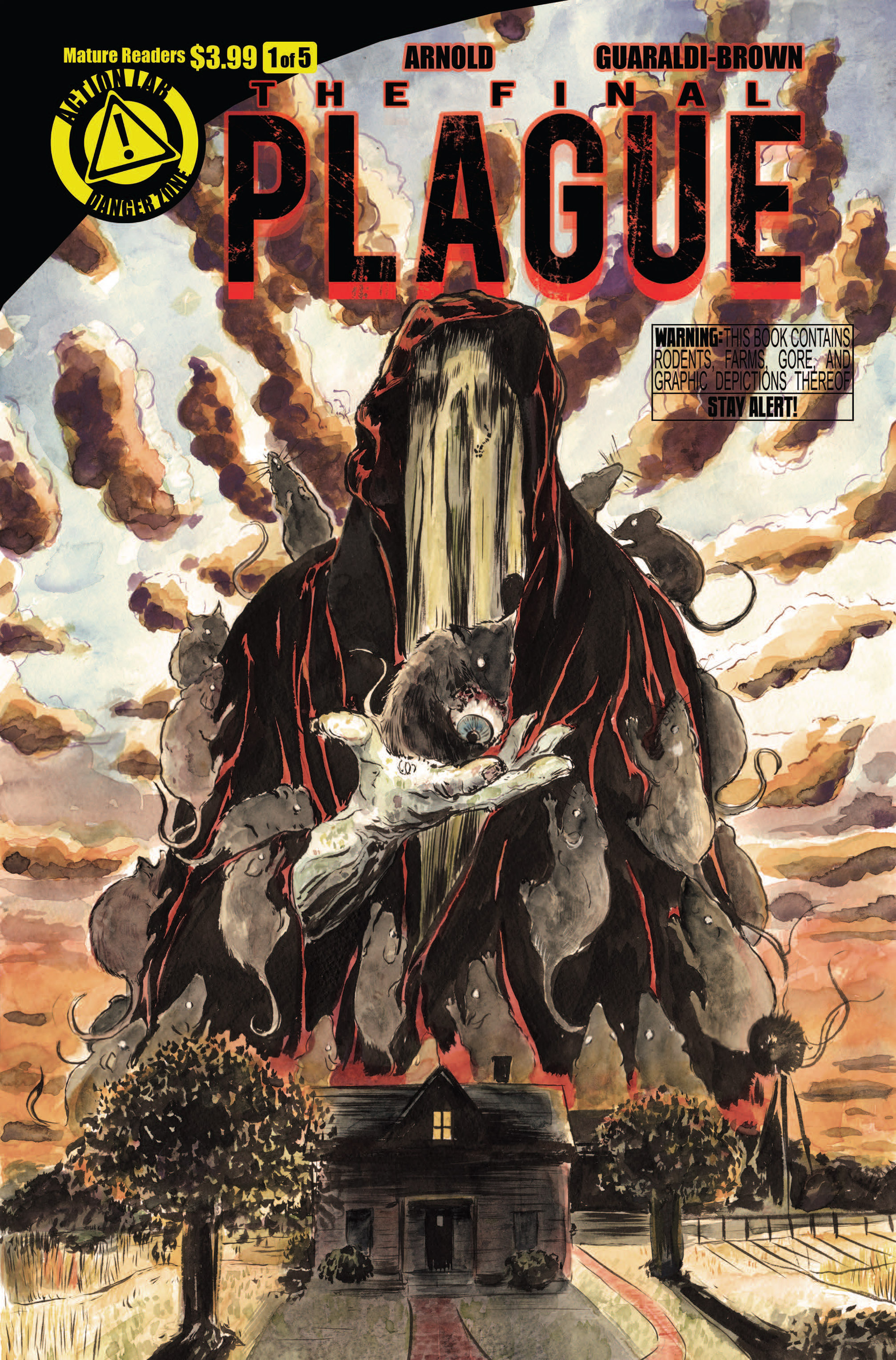 The Final Plague begins in Lehigh Iowa on May 4, 2012.  As someone who hates any kind or rodent, this was not a good comic for me to read.  It begins when a small farming family finds that their home has become infested by rats. Helen is tough as nails and ends up killing the first one after a battle on her front porch. Helen is forced to use a shovel to decapitate it and even then, the damn thing still twitches.
The second rat attack happens in New York City on the same date. A homeless man is drunk in an alley when he is attacked by what can only be described as a horde of rats. There are so many rats, they quickly overpower the drunk and consume his alive.
The third incident happens on the same date in a lab in New Jersey. Jeremy is working with the rats and he notices that some of them have bloodshot eyes and assumes they are blind. Because he believes the rats to be sick but not contagious, Jeremy does not follow along with proper quarantine protocols, much to the disgust of fellow scientist Carol. Of course it's not Jeremy is hurt but a fellow when the rat sprays blood at her which lands in her mouth. Finally, it's decided that the rats need to go into quarantine and be dissected so that the scientists can figure out exactly what the hell is wrong with them.
The one thing that is certain is that rats aren't acting the way that rats are supposed to. Normally, a rat would shy away from a human being if it encountered them but these rats are bold enough to actively attack humans when they come into contact with them. We later learn that it's not just the rats and that in fact all of the furry rodents are doing damage to humans when they encounter them. The red eyes suggest some sort of infection which is making the rodents more aggressive than usual. Alan, the exterminator posits that all of the pesticides that humanity has been using has emboldened the rats and changed their behaviour.  Of course, Alan finds out the hard way when he succumbs to the rats when he tries to exterminate them at the farm.
The Final Plague Vol I  quickly establishes the idea that rodents aren't behaving normally and are attacking and consuming humans. As someone with a deep fear of rodents this comic rises to the level of horror for me.  It does however make historic sense. We know for instance hat the bubonic plague was carried by fleas on rats which is estimated to have killed 50 million people.  Rodents are nothing to joke about because they carry disease, so the idea that the end of humanity might come at the paws of rodents makes perfect sense. It's particularly true in a city like New York city, where the rat population is enormous. Think about what it would mean for humanity if the rats suddenly started working in a swarm to attack humans. And since they can slip into a hole as big as a quarter and quickly reproduce, this would be a true nightmare because not only have to deal with the diseases which rats carry, we'd be attacked as prey.


What is less believable than a plague caused by rats that quickly moves onto other animals is just how quickly society falls apart. From beginning to end, it takes 24 hours before cities are burning, the main lab must be abandoned and a significant portion of society is either dead or infected. I appreciate seeing the beginning of a dystopian society; however, having society fall apart so quickly is just ridiculous, even if we are all surrounded by animals to some degree.
We really haven't been introduced to a lot of characters so far. The most prominent female characters are Helen, who is a wife, mother who is dealing with a cancer diagnosis and Carol who is a scientist.  What both Carol and Helen have in common is that they read like harpies.  It's Carol and Helen who demand that the men in their family and work space do something about the rats. It is suggested to each woman in turn that they are overreacting. Jeremy in particular is dismissive of Carol concerns, claiming that his name is on the research grant as well. Common sense should have suggested to Jeremy that rats with red eyes are a no go but instead what we have is a man bucking against being told what to do. It's particularly grating since Jeremy is the reason the plague exists in the first place. Jeremy's name may be on the research but it's Carol who is the head researcher and such it's Carol who takes responsibility for Jeremy's actions and creations.  So not only was Jeremy a fool who did't take proper precautions and caused the plague in the first damn place, it's Carol who is going to be held accountable.

In the case of Helen, we are given the sense that she roles the roost. However, the issue here is that while the men in the family claim to have a healthy respect for Helen, Robert does the usual passive aggressive male bullshit when he talks about staying on the right side of Helen.  Rather than seeing that maybe Helen has a point that allowing their home to be overrun by rats, Robert turns this into another instance where he is doing Helen's bidding to avoid her harping on him. Shouldn't Robert want to be able to live in a home which doesn't have rats?

In many ways, The Final Plague is very reminiscent of Zoo. The cause of societal break down is animals running amok.  The difference is the animals become zombies.  That's right, a plague of zombies animals takes out mankind. When infected a human becomes feral, attacking anyone in their way. Humans, unlike animals die, whereas; the virus keeps animals animated and moving after death. This makes animals a particularly bad threat in that even when they are shot several times, the animals keep moving.  At this point, it seems that the humans haven't figured out how to take out a zombie animal.  It's worth noting that when Helen does manage to decapitate a rat, the body keeps moving, so this suggests that there has to be a new way of killing these particular zombies.

I don't find the artwork to be particularly compelling in this first volume. I understand that at least part of the reason that Brown chose to draw this way is to impart a sense of exactly how desperate humanity quickly becomes and how grim and dark the situation is.  Unfortunately, it makes it really difficult to relate with the characters.  In a comic, the words and the artwork work together to tell the story and if one element is subpar, it ruins the whole effect.  There were times when I found it difficult to identify who was actually speaking because the drawings were so unclear.
It's worth noting that this far, we've seen no characters of colour and there are no LGBT people in this story.  It's early yet, so here's hoping for some inclusion in Volume 2. The last thing we need is yet another entree in which marginalised people are simply erased. I think we're up to the battle against the rats and rabid dogs.
The Final Plague has established that the problem is going to come from rodents and other animals and made that super the story is creepy as well. I am caught by the situation the characters find themselves in just as I am rebuffed by the artwork. The charactersation really felt two dimensional and once again, we had a dystopian world were mean seem poised to take full control. A single leader hasn't yet emerged but given the ways in which the military and the police did the whole alpha male thing and bossed people around while making decisions about when to stay and when to go, it's clear that their pre-dystopian positions of authority are going to transfer over. There is some potential in this story even if it feels like we've already seen something similar to it. If nothing else zombie rats eating humans is gross enough to keep me interested for now.