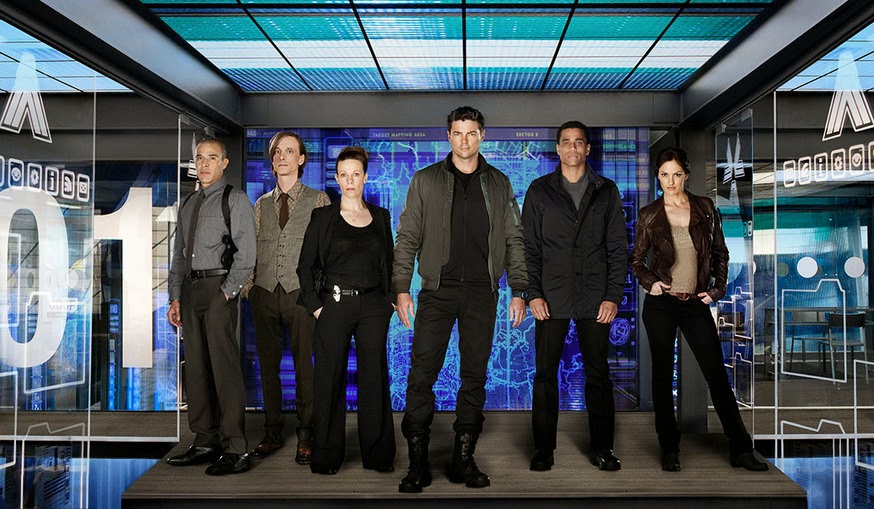 It’s another field trip of school children – haven’t we just had one of those? Do they happen daily or something? Dorian tries to show the kids educational things while John tempts them with fun but totally inappropriate things. Of course John shows them gruesome pictures of a criminal who had his arm blown off which isn’t just inappropriate for kids but is inappropriate at any time – cops really shouldn’t be gleefully boasting of maiming people.

Away from John traumatising children, a hooded figure shoots a young woman and steals her bag – he runs but within seconds he is surrounded by a gazillion drones and androids. They surround him and when he raises his gun they shoot him. Removing the mask reveals a service droid (a robot) and apparently not the first one reprogrammed to commit crime.

The droid is moved into the evidence warehouse, but once alone it reactivates. It gathers several pieces of evidence, including a female android head (the same head we saw in the pilot that Insyndicate were looking for) and some weapons. It replaces its featureless head with the female one and arms up. She leaves, shooting the guard as she does.

Time for the gang to review the footage – and they recognise the head: she’s an XRN (which they thought they destroyed – apparently only the body). Maldonado orders vast resources for a city wide mobilisation of an awful lot of police, she goes so far as to call the XRN out there an act of terrorism. John makes the Insyndicate connection – and worries that they’re going to hit “the wall”. Whatever that is.

Dorian looks on, confused – there’s no record of XRNs anywhere. You and me both Dorian – did we skip several episodes of exposition here?

Cut to XRN killing a taxi driver – to underscore Maldonado saying how dangerous she is.

John then expositions to Dorian (in a REALLY overdramatic voice), the file has been removed because it was embarrassing. Lunacore made the DRNS – and when the DRNS were decommissioned for being unpredictable, the company was in severe financial trouble so created the XRN – a soldier more than a cop. At the demonstration something went wrong, there were so many casualties they had to set up triage. They sent in waves of police and MXs but the XRN is very hard to kill, 26 police died. It took them three days to corner and destroy the XRN until they only had a head left.

News from Rudy tells them that the person who modified the first bot was pretty damn good at his job  - but even that has limits and that the XRN will need a new body soon.

To the XRN arriving at a warehouse with several android bodies – so much for that limit. She picks one (in fishnet tights and a basque, of course) and rearms and armours. She spins to point the gun at an older man who walks in but he says her name – Danica.

The gang arrives at the warehouse after she leaves; finding the older man, Nigel Bernard apparently knocked unconscious and being treated by the EMTs. But Dorian recognises the man – he’s not called Nigel Bernard; he recognises Dorian at the same time and hurries over excited and happy to see Dorian and that he’s still police. He reaches out to touch Dorian’s face – then stops and asks Dorian’s permission first. The man is Dr. Nigel Vaughn – who created the DRNs and changed his name after the debacle.

He tells them that Danica wanted to use his lab (he using “she” while John uses “it”) but, of course, after the disaster he doesn’t have a lab any more. He doesn’t know what she wants and he rants a little about how he is completely defined by the disaster (drawing clumsy but coincidental comparisons to how everyone links John to his little disaster). All Vaughan can offer is that, if he has his old equipment, he may be able to track Danica – so time to take him to the police station

They take him to Rudy who has a completely creepy geek moment all over him before reuniting Nigel with all his lab equipment which has been in evidence storage. Among them a big box of what he calls “synthetic souls” and while he’ll accept blame for many things, he objects to John “blaming” this on him – when he considers them his greatest achievement. He gets very metaphysical and woo-woo about the whole thing; emphasising the soul “the essence of life.”
Danica has some more fun – taking a guy down and cutting out his eye so she can then use his retina scan to get into a secure location where she kills a lab tech. Richard and his team process the crime and pass the info on to John

John tells Nigel what she stole (500 ZNA processing cores). They’re cores used in the creation of androids – super processors. Simplest explanation for why she wants them – she intends to create 500 androids.

They take the plan of the modified robot to a robotics expert who tells them how very very impressive it is and he theorisies it would be a young genius – someone who is brilliant but unfettered by convention and also that they couldn’t be local (he suggests someone in “New Tokyo”) because he would have heard of their genius. Dorian suggests someone on the other side of The Wall – but the expert scoffs – they don’t have the resources on that side of the Wall and no-one that intelligent would willingly stay on that side.

Vaughan creates the tracking device for Danica. Rudy continues to praise and worship the man for creating such perfect, human androids while Vaughn continues the whole “soul” consideration by noting how positive and happy he was when he built the DRNs – and how angry and resentful he was when he built Danica; but he insists she isn’t like the MX and there’s more to her than first appears.

Cut to Danica in her stolen taxi and a woman and a girl get in. Danica prepares to shoot them – when the girl tells her she’s pretty. Danica stops and lets them go.

At the police station they get the tracking device up and running and Nigel also has a nifty Danica stunner for them – but it needs to be inserted into the back of her skull. Good luck with that.

Danica arrives at a bar and focuses on a councilman James Hart – and draws a big gun. At the police station they dig up info on the bar – a re-election party for said councilman with lots of big, influential people attending; and she starts opening fire.

Dorian, John and a whole host of MXs arrive, get to positions and move in. Bullets bounce off her and she easily takes down several 5 MXs and 2 police. Watching from the police station. Nigel gets increasingly more distressed at the repetition of his nightmare until Valerie suggests he wait in a side room.

As Danica reloads, John rushes forward and stabs her with the stunner. Which does nothing. Maldonado shouts to Rudy to get Nigel – but he’s disappeared. John tries some hand to hand combat with Danica which goes exactly as well as you’d expect.

Leaving John unconscious she goes to finish off the councilman – and Dorian shoots her (doing nothing). He asks her why she’s doing what she’s doing and she says “my sacrifice is necessary, just like yours”. Now it’s his turn to go for hand to hand combat after declaring that they’re nothing alike

Being an android himself he does much better than John did – but she’s still more deadly, eventually kicking him through concrete pillar and impaling him on a length of rebar. She moves in to finish him off – and John hits her with a big metal post. Hand to hand combat round 2 –and he loses again – but he does manage to pull the pin on one of her grenades. As she looks at it, he kicks her with his cybernetic leg and sends her flying out the room (I could be nitpicky about equal and opposite reaction and how he’s balanced and grounded on a very real leg – but c’mon on TV this is positively realistic).

Booom. Dorian and John are bettered but alive and Dorian makes a point of how good John’s synthetic leg is. Danica is destroyed – a disembodied head again.

That’s when it’s confirmed that Nigel Vaughan has disappeared – and the councilman he targeted was the man who spearheaded replacing all DRNs with MXs.

Rudy, of course, can barely believe it but they quickly find that Vaughan has also taken his stash of synthetic souls. John and Maldonado also recognise how awful this must be for Dorian; Dorian is having problems considering that Danica has exactly the same synthetic soul as he does – and that his creator could possibly create something like Danica. As John offers words of comfort, Dorian realises Nigel isn’t going to run and hide – he wants to work and build androids en masse. He needs a lab – a big one. With Valerie and Maldonado they consider large, derelict parts of the city that could serve but Dorian asks –what about over the Wall? John and Maldonado thinks that’s too extreme even for Nigel.

To Nigel who retrieves the stashed 500 ZNA processors Danica stole and gets in a black van driven by work android. He’s driven to… a giant Wall with warning signs all over it. He whistles and a rope is lowered to pull him up, over the Wall

I am bringing it up again – this show has a completely unexamined problem with the police: they’re violent, usually as a first resort and there’s zero come back or even guilt about torture, maiming or even killing people. Frankly, between that, the “patrolled internet”, the hover drones everywhere and the database that they have on apparently everyone, with extra facial recognition software, the police deleting “embarrassing” files and I’m getting close to labelling this dystopian.

But then, with the Wall people are talking about, maybe I’m not far from the mark?

This episode had some excellent development on the whole humanity of the androids as well – with both more examples of the MXs being seen as disposable  (and not just from the core team) but also the stark difference between the respect that Nigel shows Dorian and even John does; or even Rudy. Perhaps most of all is the way Nigel talks – not just of creating excellent machines, but actually creating life. Even Danica’s little flashes of humanity really brings to the fore the question that has been occasionally raised throughout the season but only briefly and never really examined.

Between both of these things, it feels like Almost Human has done the introduction and is now going to hit the meat of the story.

What happens from here could make the story awesome or well and truly jump the shark. Or both.

Almost Human seems to have a lot of minority background characters for minor roles  - taxi drivers, florists, random lab techs, but that same diversity doesn’t always follow through with the more major roles.