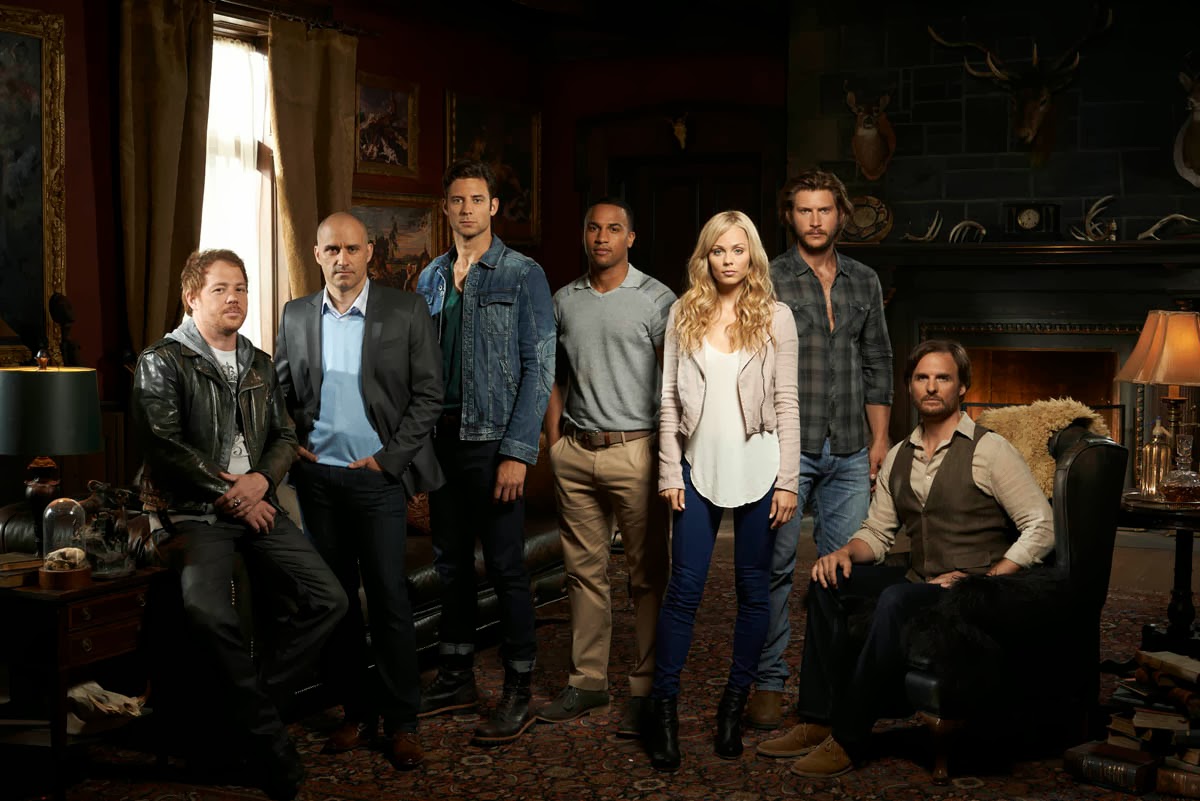 The wolves have all returned to Stonehaven to bid goodbye to Pete. What they don't know is that as they say their goodbyes, toasting Pete's ashes, a wolf is making it's way onto the Stonehaven property.  Elena says that all Pete ever really wanted was to spread his love and was killed by a monster who hates everything they stand for.  They hear a wolf howl and the group breaks up to start looking for it.  Jeremy, Elena and Clay find Pete's jacket hanging from a tree and Jeremy realises that the mutt is baiting them.  Jeremy declares that they will continue to mourn for Pete tonight but tomorrow the will hunt.

Back in the house the next day, Elena approaches Logan who has a cup of coffee ready for her.  Elena is very upset about Pete being dead and she says that she doesn't understand why.  Logan suggests that Pete was either targeted or was in the wrong place at the wrong time.  Logan then adds that the pack's rule is being challenged. Elena says that she doesn't know if she can go home until this is settled.  When Logan brings up Philip, Elena says that this is just one more thing that she cannot share with the man that she loves.  Logan suggests that Elena get everything out of her system before she heads back home.  Elena gets up to go and finds Jeremy, who is outside scattering Pete's ashes.  Elena is overcome when she holds the urn and says that she has never grieved for a family before.  Apparently, Pete's death has brought her emotions to the forefront regarding not growing up with a family.  Jeremy assures Elena that that she will always have people at Stonehaven who love her and will always take care of her.  Elena moves to walk away saying that she doesn't belong there because all they have at Stonehaven is violence and death.  Jeremy reminds Elena that they also have love and she needs to find the balance. Elena again says that she wants a normal life and calls Jeremy complacent before crying and leaving.

A wolf changes back to human in a dumpster and quickly gets dressed.

Elena is walking on the property and punches a tree in rage.  Clay tells Elena that he has never seen her like this before, while approaching Elena like she is a skittish colt. Clay and Elena hug and he brings up that they used to work out their problems by staying in bed together.  Elena quickly blows him off saying that this was before.  Clay starts to strip saying that if they go for a run and stay to the Northwest corner of the property, they won't be seen.  When next we see Clay and Elena, they are two horrible CGI wolves.

Jeremy is talking to the sheriff, who is wrapping up her investigation. Morgan is concerned by the fact that the wolf killed the boy and then dragged him to Stonehaven. Morgan then asks Jeremy if he knows anyone who has a beef with him because it is clear that someone has a grudge against him.  Jeremy says that he is a painter and everyone at Stonehaven sticks to themselves.  Morgan backs off claiming that she is not making accusations but wants to figure out what is going on.

Clay and Elena are back in human form lying in a pile of leaves.  Elena strokes Clay's body and so he turns over and kisses her.  Elena gets up and leaves Clay lying on the ground.  When Elena returns to the house, Logan and Nick tell her that Jeremy wants them all in the great room.  Elena heads upstairs to change and Clay enters the house.  Nick teases Clay about nuzzling with Elena and asks Clay to put clothes on.

Elena is dressed and her phone goes off - of course it's Philip.  They have some small talk and Philip offers to come down to be with Elena but she blows him off and brings up the vodka campaign.  Philip brings up the wolf killings that were in the news and Elena tells him that it was nothing.  Elena promises that she will be back in time for his sister's wedding and they end the conversation.

In the great room, Antonio approaches Jeremy about the fact that they have two mutts to deal with.  They talk about the last time the pack had troubles like this.  Jeremy brings up the old mutt hunts that they did until all the mutts capitulated to pack rules. Apparently, Jeremy blames himself for Pete's death saying that it only happened because he became complacent. Antonio tells Jeremy not to blame himself but Jeremy argues back that as the alpha, it is his job to keep the pack safe.  Antonio advises Jeremy to remember that the pack is all of them and that they are all in this together.

Elena and Clay head downstairs and Elena brings up the kiss, calling it a mistake. Clay says that they are clear about what happened and they continue downstairs.

Antonio asks if they are to start spilling mutt blood but Jeremy believes that this is not a wise choice and asks Antonio to reach out to the other pack families.

Morgan heads to see Emerson who is fishing.  Morgan asks about the Danvers family because she has heard a list of rumors about them.  Emerson tells a story about a telephone worker who vanished on the Danvers property and makes it clear that they never found a body.  Emerson wonders if the worker saw something he shouldn't have.  Morgan is still concerned about the body dump and says that there is something about the Danvers clan that doesn't sit right with her.


In the great room, Jeremy announces that he has sent out Antonio to deal with the fallout of Pete's disappearance and that they need to deal with the mutts. Jeremy sends Nick and Logan to the flophouse that the mutt from the rave lived in to wipe it clean and turn it upside down.  Jeremy points out that Pete paid with his life because they thought the threat was over.  Jeremy then sends Clay and Elena into town to see if the can pick up the scent of the second mutt.

On the way out, Clay and Elena stop at the gates and pick up he scent of the wolf.  They head into town and get a bite to eat, listening to the townspeople talk about the killing.  Elena and Clay bicker about his admirer at the front door.  They continue to listen in and hear that Braxton intended to head  to Stonehaven to find his dog.  Clay and Elena stand to leave and are approached about the fact that Braxton is now missing. One of the townspeople takes a punch at Clay's receding back and Elena grabs his fist, tossing him, adding that he shouldn't make things worse.

Antonio heads to see the band Pete was working for and pretends to be FBI saying that Pete was involved in an investigation. Antonio listens into Winslow calling to leave a warning on Pete's phone.

Back in Toronto, Philip is meeting with his sister who is on a ridiculous cleanse.  Diane asks about Elena because she needs her help to start on a presentation. Philip reveals that Elena is at a family funeral and end up chatting about the fact that Elena didn't tell either one of them about her family.  They both wonder about why Elena keeps secrets.  Philip says that Elena gets evasive when you cross a line.  Diane advises Philip to sit down and talk with Elena because she is certain that Elena is right for him.

Clay and Elena are walking through town about Braxton and how tightly wound the tight is.  Clay assures Elena that he can handle confrontation without hitting someone in the face and thanks her for watching his back.  Elena picks up on a scent and it leads them to a cheap motel.  They debate as to whether the mutt is on the first or second floor and Clay insists that they work together as a team.  They break into a room on the second floor and Elena goes through the drawers, as Clay looks through the bathroom. Under the bed they find a scrapbook containing all of the kills done by the wolf.  Elena quickly realises that all of his victims have been female. Elena suggests that someone is turning psychotic murderers into werewolves.  They see a truck pull up and recognize one of the men as Zachary Cane.  Clay suggests they attack and Elena reminds him of the order to bring them back alive.  Carl Marsten then hops out of the truck and Elena wonders when mutts started to work together.  The mutts head toward the room and Elena sprays cologne through the room, masking their scent.  By the time the mutts get inside, Elena and Clay have snuck into the room next door.  Marsten takes a deep breathe and manages to pick up Clay and Elena's scent.

At Stonehaven, Nick hands over prison issue shoes they found at the flophouse.  Jeremy says that the shoes are a trophy of his escape.  Jeremy throws mug shots on the table of three men who escaped from Hickson prison.  Elena identifies Scott Brandon as one of the wolves they saw at the cheap motel.  Elena argues that Marsten is the ultimate loner and that Cain isn't smart enough to make his own pack.  Clay then brings up the warehouse he heard the wolves talking about. Jeremy is worried that their society would be revealed to the outside world, leading to war with humans.  Clay declares that they have to take the fight to the mutts.

Logan is back home packing his bag when there is a knock on the door.  It turns out that it is Daniel Santos, who wants a minute of his time.  Logan invites Santos in.

Clay, Nick, Jeremy and Elena arrive at the motel planning to raid it.

Santos says that the is there to talk about considering what is happening at Stonehaven.  It seems Santos chose Logan because the Danvers family hates him.  Santos suggests that the mutts are tired of the pack imposing rules. Santos says that before Logan came around, he was pure pack and that his great great grandfather was an alpha.  Santos asks Logan to convince Jeremy and Clay to allow him to come to Stonehaven.  Santos claims he is willing to look past Clay killing his brother because now is the time to work together.

At the motel, Clay tries to open door and Elena pulls him back when she realises that it is wired. Clay jumps out of the way as a gun goes off.  In the room, Elena finds Pete's finger in a jar. A note on the wall reads, "coming for my scrapbook bitch."

Bitten is still moving along at a pretty rapid pace and I am finding it much easier to follow.

Was the only one who was irritated that right after spreading Pete's ashes, Elena made it all about her.  She is supposed to be concerned about the death of someone close to her but somehow it suddenly had to all go back to Elena being without a family growing up.  It reminded of exactly why I didn't like her character in the books.  Elena is self absorbed with her preciousness.  It must have something to do with the name Elena - all the characters with that name just seem to suck.

I am just not feeling Bitten in the least bit.  I wish I could tell you what specifically is turning me off.  At best, I find each episode tolerable.  The show is so damn angst ridden that I am shocked that it's not airing on CW