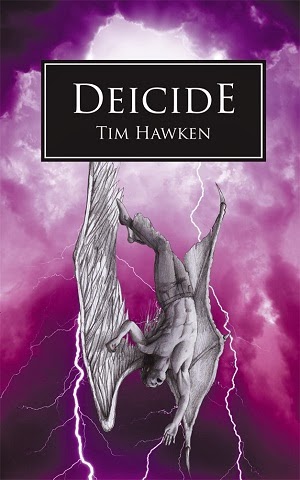 Only by being unpredictable. Only by trusting others. Only by not even knowing what you yourself are going to do next

This book is nearly impossible to review without giving away spoilers, while at the same time even a hint of spoilers would ruin some of the major issues of the book.

The world of this book continues the previous two books in the series with its complexity and nuance: the nature of hell, purgatory and heaven, of demons, of their sins and of the denizens of each realm is maintained and revealed with the same steady, well paced, well balanced skill. From the manipulating of the elements (the nature of magic) to the way the three realms are separated and the very nature of angels, demons and the powers that shape the world we have a huge world here with lots of elements that need to be carefully balanced and explained so the reader doesn’t get lost – and it really is well done. Not only over this book, but over all three books, each building on each other, revealing more and reinforcing what has already been learned: here we have some excellent development on the very nature of foresight, the core of the battle against Asmodeus and further display of just how very broken the current system is. This isn’t done in clumsy info dump – but through a lot of showing of injustices, of seeing people time and again caught in the clumsy simplicity of the system Asmodeus has created. Not out of malice – it’s far too simple to have the bad guy be just malicious – but out of complete lack of understanding and an overwhelming self-centredness.

What I particularly liked was seeing how the flaws of Asmodeus’s creation is reflected not just in Hell – where the flaws are writ large – but also in Heaven with the constant dual refrains maintained: deception and ego. The whole of creation is Asmodeus’s lie – not just a lie to everyone else, but to himself about what he has created – and his willingness to twist everything (certainly what people believe) to further elevate his ego. Even Heaven itself is hierarchical, constantly requiring people, driving people, to seek Asmodeus’s favour. It’s excellently presented because it is a continuation and development of the books that have preceded it, this world constantly being reinforced and unfolded before the reader without any inconsistency.

But with lots of questions. These books are never going to be easy reading. They beg lots of difficult questions about good and evil, truth and lies, authenticity and honesty and control. Even relatively minor elements in the book have vast questions attached – like the demonic angels, the avatars of sin; in theory evil but also inherently what they are, inherently honest avatars of their true natures. Or the furies, old powers with their own city – powerfully displaying the very wrongness of blanket condemnation without nuance or examination – a city of women who have been wronged and have sought to defend or avenge, condemned without any reasonable examination of their crimes.

And rarely have I seen a book adequately present foresight and its power as well as this one. Ultimately, an enemy who can predict your actions is one who is nearly impossible to defeat because he will always be ahead of you – the complexities this brings derailed the entire campaign and requires vast conspiracies, secrets and some truly excellent manoeuvring to actually have a chance in the final battle against Asmodeus.

Which in turn creates a truly amazing story with a lot of excellent twists – twists that by their very necessity need to be shocking and surprising because that is the only way to catch the future seeing Asmodeus completely off-guard. This means the book has some truly awesome moment of surprise, epic action – time and time again as both sides try to out shock the other – and the ending….

I don’t even know what to say about the ending. I don’t know whether to be devastated or angry or happy or thoughtful. Possibly all of the above.

The characters move through this developing world and fast paced, complex story the only way a good character possibly could – by growing. Michael has a lot to learn, guided by mentors like Zoroaster and the Perceptionist, he learns not just his magic but far more importantly, he learns what he truly wants. What is his ultimate goal? Revenge, to enter heaven, to be with Charlotte forever, to free Hell, or to realise Zoroaster and the Perceptionist’s vision? Even to understand that vision? All of this is essential for him to even know what victory is, let alone how to achieve it. To maintain hell and his followers he also becomes a truly excellent leader – wise and inspiring, flawed but willing to listen to others and their perspective.

He also is called upon to trust his friends a lot more – for all his power (and his power is immense) he isn’t the great saviour who will do it all himself – he must rely on others; he cannot win without Mary and Charlotte and Marlowe and Clytemnesta and Smithy and      all excellent characters, strong characters with their own growths and expertise, their own skills and powers to bring to the table. Michael couldn’t succeed without any of the, Diversity-wise we still have no GBLT characters, but we do have some POC – Marlowe and Zoroaster in particular and some background characters but given the large cast it’s an unfortunate flaw in an otherwise excellent book.

This trilogy is a must have. The three books together raise huge and complicated ideas that can have you chewing on them for hours, complete with an excellently complex, powerfully fascinating world and a story that is both exciting and deep that will grab you and drag you in until you have to come up for air only to try and digest the concepts raised. And all of this told through the lens of some of the best characters I have ever come across – a truly excellent trilogy.