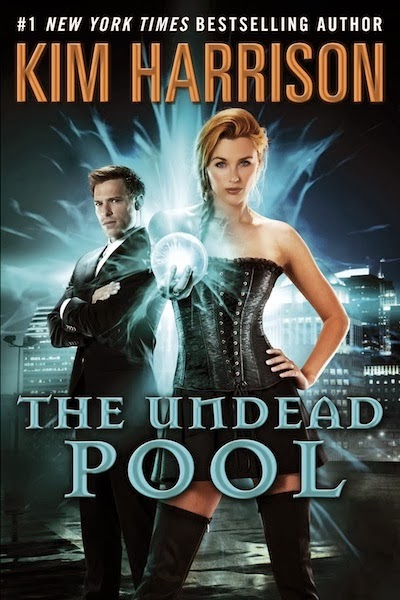 
The Hollows is a series by one of our favourite authors, Kim Harrison. Essentially, humankind becomes stricken by an infection borne in tomatoes and the world almost shuts down. The world is saved by the supernaturals (Inderlanders) who not only announce their presence but take on the jobs once filled by humanity to keep the world running. Our protagonist is Rachel Morgan and she is a witch. She lives with her friends Jenks, a pixie and Ivy, a living vampire. Together our merry threesome spends most of the series involved in one supernatural disaster after another.  If you haven’t read The Hollows, we heartily recommend it.


Throughout the series, Rachel for better or worse has had several love interests. In recent books however, it’s clear that Harrison is setting Rachel up to have her HEA with Trent - an extremely shrewd elf. There are longtime fans of this series who are great fans of this pairing and, to some degree, I agree that Rachel and Trent make an awesome couple. I even admit that at one time I may have tweeted Kim Harrison bemoaning the fact that she didn’t let Rachel and Trent do it at the end of book 11. Talk about a pure tease. Rachel and Trent have known each other since they were children and for much of that time it would be fair to describe their interactions as acrimonious. It is only after Rachel works as Trent’s security on a few missions that an attraction begins to develop and they learn to see each other through a different lens. However, as the relationship progressed, even as my pure fanpoodle heart was racing, there were several problems that I have been forced to acknowledge.


Trent has done some terrible things… but this doesn’t necessarily preclude a relationship, especially if the characters and relationship are developed and the problems addressed.


Trent is one of the best characters I’ve seen written in a long time, certainly one of the best villains and, in some ways, one of the best redeemed villains. He appears in the first book as the cruel and brutal organised crime boss, a man engaging in horrendous illegal research that has already destroyed most of humanity - he’s a drug dealer, a murderer, a man Rachel simply has to bring to justice.


As the story develops we learn so much more about him - and see so much about his growth.


Was he ruthless and engaging in terribly illegal practices? Of course he was - his entire species
rested on the results of his tests. His people will literally become extinct if he is not successful - how could he not break these laws? And how could he not destroy his enemies with brutal, evil efficiency? This isn’t his money or his power that is under threat - they are threatening the continuation of his species. If someone was literally menacing the last hope humanity has to stave off extinction, what would we do to them?


Was he callous and cold? Yes, but did he have a choice - raised by bodyguards who have extreme trouble showing emotion after his parents were killed? Having dubious friends (at best), the best of which actively engages in a gang war with him? What chance did he have to become other than callously ruthless when he had this solemn duty dumped on him from such a young age? When the only tools he has to achieves these goals break the most vital laws of society, how could he not become an underworld power? There is literally no other way for him to save his people.


As the books progress we learn more and more about his character - not someone breaking the law and controlling people for his own power, but forced into this very dark life by an overwhelming sense of duty. We also learn that his overwhelming loathing of demons, which colours many of his reactions to Rachel’s magic use, has to be overcome in the face of a mutual genocidal war and thousands of years of brutal conflict


We also see him grow as he learns that there are other ways to do things. As he comes to know Rachel - and Jenks - he develops real friendship perhaps for the first time in his life. He learns a way of doing things beyond bribes, threats, charming manipulation and the loyalty of employees, even though he’s tried all on Rachel, none have compelled more than temporary compliance (and no small amount of headaches). As the books progress and he needs them more and more (and is pushed by Quen) he is forced to work with Rachel as an equal, to show her grudging respect and, in doing so, learn a whole new way of living and thinking. In the last book he marvels how many people in Rachel’s life are willing to risk so much for her - how, when her life is on the rocks, she has Ivy and Jenks and David and so many others willing to step up and have her back. Rachel shows him a new way of living and a new way of relating to people and an option beyond the eternal pressures of duty that crush him.


That’s not to say he still isn’t ruthless - but Rachel becomes someone he respects and by Pale Demon - and certainly by Ever After Trent using his powers against Rachel seems completely and utterly unthinkable. It’s a massive shift from Dead Witch Walking but is has been wonderfully developed over the course of the series to create some excellent, organic growth.


But despite that, his actions (especially towards Rachel) have not been addressed.


Trent has a history of being abusive towards Rachel and while his feelings and motivations in that regard have changed, this does not eliminate or erase his past harm.


In Dead Witch Walking, Rachel sneaks into Trent’s office in the form of the mink to investigate his involvement in illegal brimstone trafficking. Once she is  discovered Trent decides to use her in underground rat fights, drugging her and forcing her to fight to the death against other animals in the stated hope of breaking her to his will. He would have left her to die had she not managed her own escape.


In Black Magic Sanction, Pierce is forced to save Rachel because Trent’s elf magic makes her feel like fearful prey that is being hunted. Pierce has to hold Rachael down until the hounds run past their position. In The Outlaw Demon Wails, Trent discovers Rachel’s heritage and, uncomfortable with being in a submissive position to her and loathing what she is, Trent attempts to have Rachel killed.


All of this is bad enough but Trent is also guilty of trying to manipulate Rachel repeatedly. He attempts on several occasions to get Rachel to agree to work for him, often trying to exploit her low income and desperation (something Quen also adds to - with the addition of attacking her as well).


To be clear none of Rachel’s romantic relationships were all that positive. From Pierce to Kisten to Nick, all of them had extremely problematic natures, (the closest to safe was Marshall - and he failed precisely because he was safe) and Trent, despite his supposed redemption really isn’t different than the aforementioned men. They all seek power by any means necessary and she is never really a priority in their relationships. Trent may have changed but his motivation seems to be not so much about being with Rachel, as much as it is about absolving himself of some of the  responsibility for the future of the elves. Trent wants freedom and his rebellion takes the form of Rachel, and while there’s no denying the genuine connection and passion that both of them have for each other, Rachel is still Trent’s out. Just as Trent has been evolving, he has also become increasingly unsatisfied with the life that has been forced upon him - the loveless marriage, being accountable to a strict Elven society and being forced into the role of a mob boss. Rachel is his escape from all of that, Rachel is his way out of this life that is crushing him


That doesn’t mean he doesn’t love her as well - but it adds an extra motivation that becomes problematic when we consider his history of trying to use Rachael - especially when none of that history has been addressed.


Which is the core of the problem with this relationship and why this almost success redemption fails. Even if the evil acts have been explained by Trent’s character growth and he himself has changed, it’s not a successful redemption if we ignore those evil acts - especially those that have been done by Trent to Rachel. You don’t redeem evil by pretending it didn’t happen - there needs to be an acknowledgement, they have to be addressed and then dealt with


Otherwise we have a relationship we’ve rooted for that is still a relationship between a man and the woman he drugged, hunted, tormented, attempted to murder and tried to enslave.