The Women of Resurrection 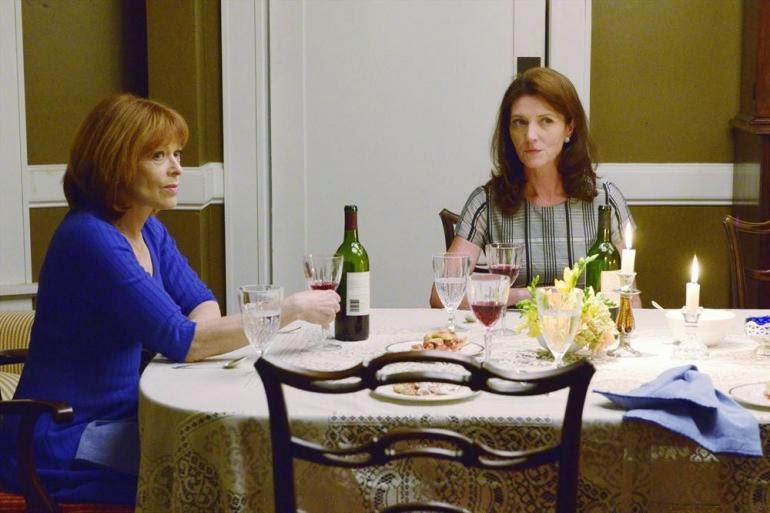 Unlike many shows on television, Resurrection actually has a pretty large selection of female characters.  Before you clap your hands for inclusion though, it’s worth looking at exactly what kind of characters we have been given. Though we have gotten to know all of the women in the season and a half that Resurrection has been on the air, they have never been allowed to move beyond very specific tropes: self sacrificing, victim, slut and or course control freak. They are essentially cardboard cut outs rather than full fleshed out characters like the men. Men are allowed to go on an emotional journey whereas the women are expected to perform their gender in a very specific manner and shamed if they dare step outside of it momentarily.


The most glaring example of this is Barbara. Barbara drowned on the same day that Jacob did. The difference is that Jacob slipped trying to save Barbara’s life and Barbara was down at the river because she was having an affair with Sam. From the very beginning, it’s clear that though Fred has mourned the loss of Barbara these past thirty years, he was anything but a good husband to her. Barbara was lonely and out of her depth and Fred was controlling and cruel.


Almost from the moment of Barbara’s return, she has been slut shamed. How dare she cheat on Fred! No one bothered to realise that marriage is difficult in the best of circumstances and that outside of the people involved, no one really knows what happens inside a marriage. It quickly became far easier for Maggie, Lucille, Margaret and even Fred himself to shame Barbara for her decisions, while neglecting to examine the various ways in which Fred let Barbara down.


During the now infamous dinner from hell, Lucille not only actively blames Barbara for Jacob’s death but unequivocally states that Jacob is dead because Barbara wanted to “screw Sam” and had Barbara stopped the affair when she was advised to do so, Jacob would have lived. Margaret has not minced words when it comes to her descriptions of Barbara either. When Margaret sees Barbara dressed in shorts and a pullover, Barbara actually describes this outfit as “next to nothing”, to emphasise to Maggie that her mother is a no good whore. For her part, Maggie blames Barbara for her not having the perfect family reunion because Barbara chose to return to Sam, who was neither neglectful or emotionally abusive like Fred.


Barbara is shamed for making her own sexual choices and made to look like the Scarlet Woman. I am in fact shocked that they didn’t demand she walk around with the letter A sewn to her clothing, while she is followed by a child banging a drum so that the passerbies know they are in the presence of a slut. In the end not only is Barbara attacked everywhere she goes, she is convinced to give up her life by Margaret.  Margaret cites Barbara's poor decisions as the primary reason that Barbara should give up on life. Instead of fighting, Barbara, who by that point is so full of shame, simply gives in and disappears.


What crime did Barbara commit that she didn’t deserve to live? Why the evil of adultery of course and having the temerity to reduce Margaret’s control on Fred. Margaret made it absolutely clear that had always had a tumultuous relationship with Fred but when Barbara arrived on the scene she lost all semblance of control over her son. As much as Margaret didn’t want to see Fred get hurt again, Barbara’s biggest crime was the potential influence she could have had over Fred again. It’s almost incestuous the way that Barbara seeks control of who her son is dating. Barbara was Margaret’s competition and Margaret simply could not handle that.


Another family in conflict due to the Returned is the Hale family. Pastor Tom is caught in a difficult situation between his wife, Janine and his Returned pregnant ex-girlfriend Rachel. We see a lot of Tom’s conflict over this, we see his struggle with both them and with his church and even with his childhood friend Jacob. Tom is in a difficult situation and we see a lot of that developed and on screen


But aren’t Janine and Rachel in an equally awkward situation? We don’t really see that. In fact, what pain and struggle we do see from them is usually to serve a wider plot point than to develop their characters. Take Rachel - lost and confused, out of time and, as far as we can see, having no family other than an ex-boyfriend who is now married to someone else (it’s telling that we know so little about her family). We have seen her struggle - we have seen her kidnapped and murdered; but that was hardly a development of her character so much as it was showcasing the hatred building among several members of the town. We didn’t see her struggle - we saw her victimisation for the sake of the plot.


Even Janine is treated the same way - her anxieties and insecurities are not about her character development, they’re about Tom’s development. Her worry, her jealousy is presented as something he has to deal with and worry about (she even disappears for a considerable amount of time to such a degree I actually thought she’d left town). It is, like Rachel’s victimisation, also used as a plot point to drive home the town’s increasing anger against the Returned with her “confiding” with nasty gossip Helen - which lead to the whole showdown in the church. Again, her anxieties weren’t there for her character - they were a plot device


This leads to another problem with Janine - she is (or was) a bad guy. She was the one who blamed Tom for something he wasn’t doing, she was the one who spilled the beans to nasty Helen, she caused so much trouble. We never really saw her side of things or delved into the pain of having Janine back and be pregnant with the child she so desperately wanted and couldn’t have - we never saw her conflict as part of her, but as an extra millstone round Tom’s neck.


This is almost lampshaded when she actually speaks to an apparently good friend who promptly tells her to Jesus-up and go play nice, forgiving hostess and semi-midwife to dear Rachel. There’s no attempt to validate her pain - she’s castigated for it and sent into service (though she does very noticeably “stake her claim” on Tom through sex). Of course, the whole infertile woman serving the fertile, “true woman” is a nasty trope we’ve seen before.


This, in turn, also moves into another common theme we’ve seen for women in this series - self-sacrifice, selflessness and service. They are the ones who keep their families together, who give up their own lives to help others and who keep things moving with heavy lashings of love and acceptance even while the menfolk around them have their moral and emotional quandaries.


I’ve mentioned Janine doing her Christian duty to her hubby’s ex but she’s hardly alone. Lucille is the lynchpin of the Langston family, going through every bit of the same emotional trauma as her husband Henry but while he retreats and shows us all his pain and conflict in a series of excellently well acted scenes, Lucille gets on with things (and continues to cook for and generally tend the family). She is there for Jacob while Henry gets his shit together, she’s cooking for his Returned appetite, dealing with his childish tantrums and she’s gritting her teeth when her evil mother-in-law returns from the dead, puts up with the crap Maggie’s thrown at her and even comforted Henry when Margaret was less than diplomatic over the factory being closed down. She tolerated Fred being re-admitted to the fold and even gets through most of the dinner-from-hell around her own table which she had little to no say in. Her meltdown at that table was so dramatic because for once she was allowed to break for more than a couple of minutes, the floodgates simply opened up.


Elaine has been the primary caregiver for her disabled brother both since her father died and, it was heavily implied, when her less-than-ideal father was alive at that. She was the sole support for the household from a very young age (when Maggie was in college) and giving up her dreams of art school to hold the family together. Her father brings her no end of chaos, confusion and destroys what life she has built - Elaine is knocked back time and again and the men around her either sabotage or burden her.


Even Maggie is a paragon of self-sacrificing virtue. She’s a very talented doctor but never left the town not, as she claims, because she loves it there - but, as Elaine explains, because her father Fred couldn’t stand her to leave. Like Elaine, she has to sacrifice for a family that can’t keep itself together without her. And now, as the town doctor, she is the prime caregiver and go-to emergency for all the Returned in town (and even playing forensic anthropologist) - notably burning herself up with the amount she’s working. She’s landlord and confederate for Marty and, despite all the pain she feels, she reaches out to Barbara.


In fact, the main woman who doesn’t seem to live in service of others is Margaret who is quite clearly becoming the main villain of the show (unless we count the yet-nameless boss Marty reports to - who is equally villainous). This is another common theme we’ve seen before: women who are good are selfless and exist to help and uplift those around them - they’re sacrificing and caring and nurturing. A woman who puts herself first or even presumes to have her own agenda is all too often the villain.


There are a lot of female archetypes on Resurrection, but not so much female characters - these women need developing beyond the tropes they represent to become actual people.
Posted by Sparky at 9:00 AM