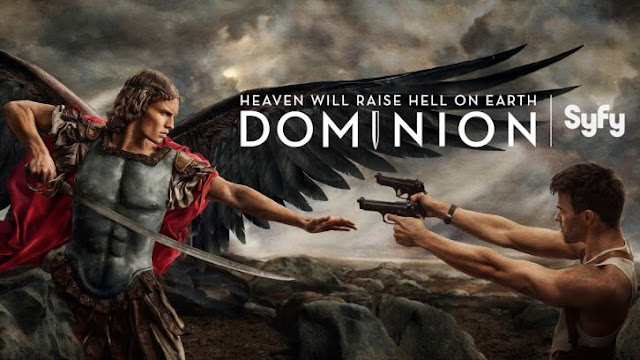 Michael is slaughtering people with brutal efficiency and a lot of humans are hiding and cowering from his wrath. Ok such a random non-sequiter is clearly another example of starting an episode half way through

Yup, we’re not spinning back to 2 days earlier. Have I mentioned how much I hate this prologue nonsense?

Alex is being held by/working with Gabriel who is getting irritated by the lack of Alex’s success in deciphering the god script all over him. Gabriel helpfully reminds us he’s getting Alex to co-operate by agreeing not to kill Claire who is pregnant with Alex’s baby. Alex actually makes me vaguely agree with him for once since he accuses Gabriel of having daddy issues (God agrees, since he sets the magic writing writhing on his arms visible only to Alex).

Noma, the undercover angel and now prisoner, is also there and would rather he didn’t share god’s secrets with the evil killy angel. Alex decides to taunt Gabriel instead. In punishment for their actions they ram steel spikes into Noma’s back

In Vega, Claire and Arika (representative from the city-state, Helena) count their chickens long before they hatch and celebrate.

David (evil politician who is evil) disapproves of this and voices his complaints because a) he wasn’t informed because he’s so very important and b) if Gabriel isn’t dead he is now Pissed. Claire isn’t listening to his whining and to rub some salt into his wounds, she also plans to spread the wealth a bit more and help the V1s (poor people at the bottom of Vega’s very rigid and cruel class system). This is awesome, alas David has an Ace – if she’d worked with him she’d have his resources like knowing his people were watching Gabriel’s eerie and knew Alex was inside. Who she has no presumably killed

But Claire, despite a brief hesitation, stays firm – she controls the military, she already had this intel and chose to go ahead despite Alex’s death (also she probably knows about his epic plot armour). Having put David rather awesomely in his place she can now be all mopey about Alex. I’ll allows some mopeyness so long as it comes with nice dollops of putting David in his place

To the utter surprise of no-one, Alex is live. To my considerable surprise, so is Noma – and he help pull the iron spikes out of her back and tries to use them on Gabriel (also alive) but is stopped by Furiad (yet again, also alive – though that may change since Noma stabbed him). Alex tries again to stab Gabriel but many more not-dead and pretty much uninjured angels start getting up. Really this bomb was pretty damn awful. Was it set to property damage only or something? Noma instead encourages Alex to run before the legion of no-dead angels catch them.

Plan B is to go to New Delphi: his logic is that he doesn’t want to lead Gabriel back to Claire. This assumes Gabriel doesn’t know where Vega is, a place he’s been, can’t figure out who bombed him AND doesn’t know that Alex is a damn fool who will do anything if you imperil Claire. In other words, it’s a terrible terrible plan. The real reason being that Michael expressly told them not to go to New Delphi so of course Alex has to go because he’s a whiny manchild. Noma is not a fan of Alex’s surrogate daddy issues and would really like to call Michael – but Alex refuses.

His vague plan is to actually use his tattoos to try and get an army from New Delphi. Of course, despite her misgivings, Noma is definitely going with him.

Along the way they have to stop for supplies at a school – with terrible flashbacks of the anti-possession lessons and evil possessed teachers. Abandonned schools also make the CREEPIEST of settings (far worse than graveyards).

This leads to the inevitable attack and Noma, thankfully with an infinite ammo gun, holding them back while Alex gets the truck up and running. Also has this show become more gruesome since last season? I don’t remember squished brains and stuff?

They’re ambushed further on the road – and Alex shows off a new power, he can hug the evil out of possessed people! (Well he holds them, prays and his tattoos drive out the angel. Exorcism hugs!). Noma marvels at this super power even though she thinks the human is dead. But when they leave he gets up.

Hugging will save the world! It’s like Supernatural meets Care Bears.

The man catches up with them, utterly thrilled and happy to find people – and less so for them to point guns at him (and be stunned he’s not actually dead). Seems the guy, Pete, doesn’t remember anything while being possessed – so he doesn’t even remember the war, he doesn’t know what 8 balls re and doesn’t know the world has collapsed. He, rather surprisingly sensibly, points out if they leave him alone they may as well kill him. Alex does think it’s worth keeping around for study purposes.

Michael, meanwhile, has decided to go to the beach. Naked. Angel’s don’t care about skin cancer and Michael has crafty means to ensue we’re on his side. Hey Alex, Michael just raised your shirtlessness with added backside – your turn. He’s been watched by a woman enjoying the view so much she only runs when he notices her.

Michael, alas, gets dressed and has lots of angsty visions/dreams/hallucinations. He finds a bunch of lesser angels (known, alas, as 8 balls because this show is good at stripping the menace from its villains with bad nicknames and daddy issues).

He finds a human settlement and lots of angels creeping up on the place. They seem to be having some kind of religious ritual but a woman there agrees to talk to him. He’s curious how such a completely undefended settlement hasn’t already been crushed. She credits divine intervention – and apparently god really loves bonfires because it’s their big town wickerman that keeps them safe. They also have, a rarity in a world overrun by murderous angels, a church. Michael wonderously examines this rarity, even if he’s not exactly welcomed by all the residents.

The woman tells him more about how they created an entirely new faith – which definitely includes the Chosen One with a pure heart (Alex) who is supposed to be the healer of angels and mankind – or who will destroy them all.

Which is when Noma decides to get out her wings and send Michael a message –probably about the new hugging for redemption power.

Still he has more pessing concerns – including the suspicious guy trying to roust him out of town (he is quickly taught the error of his ways) and the whole town losing their shit because it starts raining and they’re afraid their big-god-pleasing-fire will go out and god will decide he doesn’t like them any more because they didn’t care enough about forest fires or something.

Their superstition seems to be true – because as they get the kids to the shelters, 8 balls appear. They attack in overwhelming numbers and the humans are clearly overmatched (we’re back to the scene at the beginning of the episode) – only now it’s clear Michael is slaughtering the possessed, not humans.

The fire tricks convince Michael and he goes to the church, calling to his father.

Back to Vega, the military reports back to Claire & co that their bombs were actually just pretty pretty light and failed to do more than crack the architecture by being massacred by angels (air power vs angels isn’t the best way for humans to win, it seems). David is not impressed and chews Claire out (kind of deserved) in a highly patronising manner (definitely not deserved).

Afterwards Claire has major doubts about her decisions because of Alex while Arika is much more coldly practical about the danger of letting her emotions cloud her decisions. She also wisely warns her against David but Claire, foolishly discounts that

Which is unwise because David is currently rallying the council against her, using her support of the V1s, misogyny and her incompetence. Oh and having a council member strangled (everyone else seems relatively blasé about this) for daring to speak to Claire. Step 1 of his evil plan is to make the space given to the V1s uninhabitable.

The floors of the casino Claire decided to give to the V1s are burned on David’s order – and people in them are hurt. Time for a plan – one of Arika’s –which involves a possessed person.

William is equally disgusted by David’s minions burning people alive; William also ruins his dad’s attempt at victory by reminding him how he nearly killed his own son. David druinks – and William disappears, a hallucination

Back to Gabriel’s eerie and, contrary to what we’ve seen, apparently many angels did die. Possibly including Uriel (the actress left the show, so I’m guessing this is the clumsy killing off). Grabriel decides to burn Vega to the ground and skin Alex.

Over to Alex, Noma and Pete as they approach New Delphi – and find the body of a higher angel tied to a tree as a warning. This works on Noma since Higher Angels are pretty hard to kill. They run on since they’re chased by 8balls. As they run they’re brought down by electrified nets

Ok the people of Mallory, disillusioned people of many faiths, got together and created a new faith. With crosses and churches and candles and statues of Mary – so this entirely new faith is basically Christianity. I don’t know what’s worse about these shows which basically decide that Judeo-Christian mythology is proven right (for a given level of right), when they completely ignore that other faiths exist and the implications for that. Or when they pretend to draw upon several faiths while still being overwhelmingly Christian. I think I prefer the former (especially in a setting that has such a divergent take on the mythology).

David vs Claire has the potential to be interesting with lots of political wrangling – but it doesn’t quite hold together. The concept is good, David resorting to misogyny and belittling is not – it’s unnecessary and skews the whole storyline a great deal and is just lacking. It’s not like he can’t speak out against her in less misogynist terms – and certainly I don’t see how lashing out at her as a “bitch” is going to help sway a council which contains women

That council is also annoying – why so silent, why so impotent? These are supposed to be the main powers of Vega – get your power together guys!

I also think the show is going to be very simplistic good vs bad and ignore that we, effectively, have two despots vying for position.