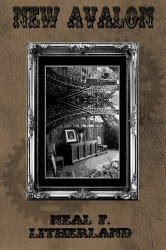 This is a collection of short stories set in the mystical steam punk city of New Avalon. In each of these stories we meet two people who, through the vagaries of magic, weird science and high emotion, find love… and a great deal of tragedy.

And each one is pretty much beautiful. Whether it’s the old tinker who waited his whole life to meet the beloved whose life he saved (but waited just a bit too long), or the captain who’s new invention inspires the equally passionate enthusiasm of his lover… only for that same invention to bring them crashing tragically to earth. To the spy who unintentionally fell in love for her target – but now they must both feel the wrath of their employers. To the gentle kind man who knows the secrets of death who pays the ultimate price to bring his true love back only to find it go terribly terribly wrong or the frustrated woman continually performing atrocities in the desperate attempt to keep her love around…

Tragedy and love are in every story. Whether it’s love lost, a love dying or utter desperation and people pursue love to their own destruction or damnation.

And it is really beautiful, I say this again. Each story is elaborate, amazingly well written and well paced with perfectly chosen word use. It’s ornate without being excessive, evocative without being purple, emotional without being overwrought. It’s an excellently well crafted book full of very well written stories of love and grief in this city

The city (or cities… which I will get to) is also nicely presented, with each character we can picture where they are and the challenges they face and even the background on which their sagas are painted. The backdrop is very vibrant

I just… don’t really understand this book. I don’t understand it conceptually. Of course, I have to admit, again, that I do not like short stories except within a relatively narrow set of circumstances (usually when they’re an ongoing part of a series adding new light to that series or as a stand alone that tells a complete story). The short stories in this book didn’t fit either of these categories.

Each story is extremely short, telling a short complete story within a central theme. They are closed stories, none of them particularly needs developing further – but that’s because there’s not much more to tell. Not that these characters couldn’t have more development or more plots in their future, it’s just that none of it is developed sufficiently to make me invest in their stories above and beyond what is presented. More could be told about their experiences and what happens from here – but I’m happy that the story is closed because I don’t really care to go any further. This is not really an ideal way to achieve that “stand alone complete story” for me – just have one event with no suggestion that I’d be interested in anything else.

The problem with the only real connection of these stories being by theme (as well as vaguely ill-defined place) and by the end I’m more than a little tired of it. A new short story starts, we find the man, we find the woman, and lo one will be dead (or otherwise tragically removed) by the end. To begin with each of these beautiful little tragic masterpieces are interesting and artful to read. But as the same concept is repeated several times over then by the 10th story I’m definitely wavering. I think they also lose emotional power – after all if we know every story is going to end tragically, the inevitably tragedy just doesn’t feel so powerful

As for them being connected as part of a greater universe – they’re all set within the city of New Avalon… but despite being beautifully described in the ornate writing, when it comes down to it these stories focus so much more on character and emotion that they’re pretty much set in Generic Steampunkopolis. The backdrop is described but there’s nothing telling me it’s all the same place. I’m not even sure if it is all set in the same place, beyond the book’s title. I just don’t have a sense of connection between the stories, I don’t have a sense of them taking place at the same time or the same place. And even if it did, I’m not sure why I should care? I mean there’s no ongoing characters, no ongoing metaplot or politics or world building or well, storyline. There’s just nothing connecting them, there’s nothing ongoing – even if all these felt like the same place and the same time there’s just nothing happening or developing or any hooks for me to be invested

As for diversity – all of these 10 loves are strictly heterosexual, no LGBT people at all. I can think of only two characters who were POC, but I think there were a few who were more ambiguous.

The stories do alternate between female and male POV, so while I think we do have a few more women dying tragically in the arms of their beloved men, we also have several men doing the same in male arms and women doing terrible things for the sake of their lost male lovers. There’s a slant, definitely but there’s also a lot of counter. We have nice settings like Fiona the mechanic and the woman who was unfaithful but is not demonised for it – in fact is avenged.

I love the writing, I love these beautiful, ornate scenes, I truly do – but give me a reason to be invested! Please, I want to dive into this book, give me some indication it’s deep enough to be worth diving into rather than hitting my head on the rather shallow bottom (I feel I have stretched this metaphor further than it should be.)

I’m left feeling like I went into a restaurant, staving hungry and was served up 9 super beautiful, elaborate, artistic little morsels. And I was impressed, I applauded the artistry… but then looked around for the actual meal rather than the hors d’oeuvres. I think this is a book to nibble, but not make a meal of.