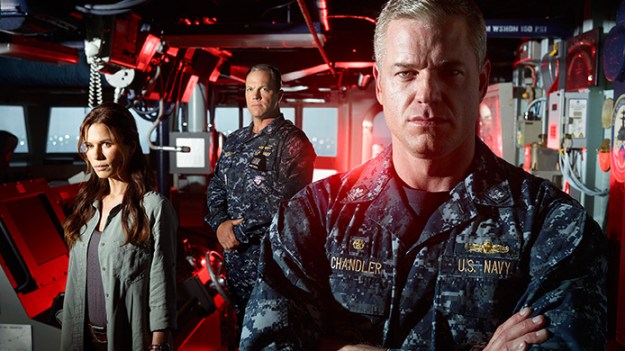 Kara is having an ultra sound performed on her by Dr. Hammada, as Tex and Scott race through the facility, terrified that if Amy gets what she needs from Kara, there won't be any reason not to kill everyone on The Nathan James.

In the meantime, Green shuts down the power before the amniocentesis can be performed on Kara. Amy orders a direct attack on the power plant and that Alisha be secured. In the tunnels, Tom and Throwald learn that Granderson has sent men out and they prepare to breach the facility.

In the surgery room, the nurse takes the opportunity to release one of Kara's hands when Dr. Hammada has his back turned. When Hammada returns to Kara, she stabs him in the chest with the needle he has prepared for her amniocentesis.  Tex and Scott burst through the door and they save Kara but leave the nurse who helped her behind.

Slattery continues to make his way through the ship.  In another area, members of the crew approach the armory which has conveniently been left unguarded.

Kelly and Ava huddle together in mourning for Quincy.  Garnett is approached about the crew making their move against the invaders.

Now that they are inside the facility, Tom splits off from Thorwald on his mission to find and secure Dr. Scott but is accompanied by some of Thorwald's men.

Slattery has made his way to some kind of surveillance area on the ship and immediately looks to locate Granderson's men.  In the process, he discovers crew members in the armory.

Granderson is informed that Dr. Scott, Alisha and Kara are missing.  When Amy hears gunfire, she orders all exits to be sealed and gives the order for Alisha to be found.

Tex tries to lead Scott and Alisha and is forced to change his plans when he sees Granderson's men.In the meantime, Amy's men have arrived at the electricity plant. Green fires his weapon but is clearly outnumbered.

The armed members of the crew begin to make their way through the ship, as Slattery watches.  Slattery turns the lights off and on to signal his men.

Passing a butter knife person to person, the crew of the Nathan James cuts away the zip ties and frees their hands. They don't get to act because the free crew men burst in and free them. Garnett once freed, orders everyone to their battle stations, announcing that it's time to take back their ship.

The master chief has returned to the Chandlers.  When someone pulls up in front of the house, they move quickly to blow out the candles.  It seems that the girl who was watching Russ has lead one of Ganderson's people to the house in exchange for food.  Amy's men attempt to take the house and Jed and Russ fight them back but decide to move in case more men come.

Tex meets up with Tom and explains Kara's presence in the facility. A near emotionless Kara admits to killing Hammada. Scott reveals that Quincy is dead.  Tom confirms that Thorwald's men will get Kara, Scott and Tex out and continues through the ship.

In her office Amy listens to a report on the attack, as Throwald makes his way through the facility. Amy is told that she should evacuate but she stubbornly refuses to leave and instead contacts the power plant, not aware of how close Throwald is to her office.

Kara and  Scott continue their escape, after Tex hands them a gun and instructs them to leave without him.

The lab is secure now but Green reports in that he cannot hold back the people at the powerplant any longer. Tom gives the order for Green to retreat and Green rushes quickly to comply.

The crew of the Nathan James is steadily capturing Ganderson's men as Slattery watches.

Russ and Jed take the kids to the Avocet van when they hear a report from Green that he is on foot and has at least six people following him. Greene says that he is going to go to Sartoga and Fremont. Jed suggests that Russ and he split up, so that Russ can help his shipmate.  Russ gets on the radio and tells Green that he will be there in less than five.

Ganderson's men get the electricty up and running.  In her office, Amy uses the intercom to tell the people that they are under attack my rogue members of the navy. Amy warns her people that if they see a navy uniform, they are to run.

At another area of the building, Alicia is trying to free the people but when someone sees her navy uniform, the people begin to turn on her.  Alicia is forced to make a run for it but she doesn't get far before being stopped by one of Ganderson's people. Alicia begs, saying that there are a lot of innocent people who need their help.  When Alica grabs for the run, she is shot in the abdomen.

Green and Russ have now arrived at Avocet.  Throwald continues to try and make his way to Ganderson's office.  Amy orders the building sealed when she realises that her people aren't actively fighting the incursion.


Tom, Green and Russ come across Alisha.  One of Throwald's men agrees to help with Alisha in the tunnels.

Outside, Tex kills Amy's men so that the people can escape the building.

On the ship, the crew continues to fight hand to hand to reclaim the Nathan James.  They manage to get ahold of the big gun and take out the helicopter which was circling the Nathan James.  An excited Slattery watches it all go down.

Throwald has made his way to Amy's office determined to kill her.  Granderson tells Throwald that didn't have to be enemies and could have done amazing things for the city together but Thorwald is not interested in partnering with Amy. What Throwald doesn't know, is that one of Granderson's men is behind him. Amy watches, as Thorwald gets shot in the back.

On the Nathan James, Amy's people have finally figured out that someone has taken control of the cameras. The former cop heads into the room where Slattery is hiding and a fight to the death breaks out. It takes a bit but naturally, Slattery wins, killing is opponent with an axe.

Tom finds Thorwald on the ground. Thorwald tells Tom that Amy is headed for the roof and Tom leaves him there to pursue her.

Slattery sends out a message to all of Balitmore that The Nathan James has been liberated and is joining the fight against Amy Granderson.  Slattery tells Granderson and her people that they are to   surrender immediately, or they be subject to the full force of the U.S. Navy.  That's a big threat because the Navy consists of one ship.

On the roof, Amy continues to give orders as Tom show up.  Tom warns Granderson's guard to surrender because The Nathan James has been reclaimed and they control the building.  Given the choice between a funeral and a trial, the guard decides to lay down his weapon.  Amy asserts that she will not go anywhere with Tom and he tells her that Alisha was shot by one of her people and left for dead. Tom yells that his children were lined up to be murdered and sent to the ovens, all so that Granderson's select few could have energy.  Amy argues that the virus was spreading and she remained calm in the face of panic. Amy adds that she is the reason these people have survived this long.  Tom tells Granderson that her little experiment is over and offers her the chance to surrender with honour.  Tom promises a jury will judge Amy and tells her to give the order for her people to stand down.  Amy picks up the radio and gives the order for her people to stand down and stop all operations at Olympia.

Amy argues that she is not a monster and that Hammada assured her the drug cocktail given to the people gave them a quick and painless death.  Amy then injects herself in the neck and collapses to the ground.

The next day on the Nathan James, the crew cleans up the ship.  Tom brings his family aboard and they watch as a dead crew member is carried by them.

Slattery pulls out the primordial and hands it to Dr. Scott, explaining that Doc and Quincy saved it Scott is very emotional and leaves to get the primoridal on ice.

Tom makes his way through the ship shadowed by his family.  Tom takes his family to his ruined cabin and informs them that they will stay there until he can find them their own room. Tom's plan is to sort things out in Baltimore before heading back him to Norfolk to allow the crew to look for their families.

The crew collect their wounded and the dead and mourn, as Tex looks at a picture of his daughter.  Kara and Greene make eye contact but don't talk.  Green sits at Alisha's bedside and takes her hand but Alisha refuses to look at him.

Tom shaves and puts on a fresh uniform before heading to the deck to survey the dead bodies.  Tom removes his hat in recognition of the sacrifice those crew members made.

This is yet another episode of The Last Ship that was filled with action and little characterisation.  While I enjoy the movie like sequences, this is season two and I feel like I hardly know the characters beyond their loyalty to each other and Tom.

It was evident that the defeat of Granderson was only a matter of time. I didn't realise until now that the dead were being used to fuel Granderson's energy plan.  It's extremely disturbing.  How did she decide who lived or died?  Sending people to the ovens invoked the holocaust without actually using that term. It made me incredibly uncomfortable to watch.  It makes Amy hyper evil and morally bankrupt while placing Tom in the right.  It sends the message that White men use their power for the good of others and are not subject to corruption.  We all know that in the real world, this is far from the case.

Alisha looks to finally being showing some emotions in regards to her mother.  I think that this was long overdue.  She had to have been conflicted but because The Last Ship focuses more on action that characterization, I suspect that this will never rise to anything more than a brief aside.

I really would have liked to have seen more women in action on this episode.  Alisha was shot and shelved, Scott and Kara left the building and Garrett only issued orders.  In a situation like this, you would think that all personnel would be active but somehow, the writers managed to place these female characters in largely passive roles.  Yes, sexism reigns supreme.

Now that Baltimore has been subdued the Nathan James is head home.  I suspect that this trip will not be uneventful.  With Granderson being subdued and Admiral Konstantin Nikolajewitsch Ruskov no longer being a threat, The Last Ship is going to need a new antagonist. It is absolutely certain that making the cure and handing it out will not be simple.