Intangible (Piercing the Veil #1) by C. A. Gray 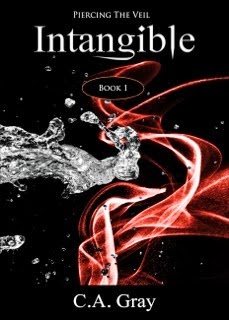 Peter is a highly intelligent 14 year old with a lot of theories and not the best social life. He is firmly grounded in reality and has little time or patience for stories, legends of mythology

Lilly has seen the supernatural since she was a child, fully aware of the invisible spirits and creatures that lurk everywhere and have their coils in everyone.

Lilly gets confirmation that she is not actually insane while Peter has his world view shattered when they both find themselves under attack by unknown forces – and the very centre of an an epic prophecy that dates back to Arthurian times – they may be the lynch pin in an invisible war for humanity that has been raging for centuries.

This book seems to be the first book in a series and I think it has fallen into the trap that many first books do – it’s far more concerned with introducing the world and the characters than it is with actually telling a story. A huge amount of this book is exposition, character development (though not so much of that) and world building (and world revelation) without any particular adherence to the story. There are times when the exposition is delivered in great big info dumps or long mental rambles that feel like lectures (well, in some cases, actually are lectures) more than actually telling a story. We have a few peaks of action but the rest is revelation and info reveal.

The world building is intriguing, the different magic system, the history, the Arthurian legend all comes together to be a fairly original world setting with really high potential. The invisible world, the different kind of spirits, what they can do, the underlying war and the hidden side community. I also like how it drew in scientific principles into its magic – it really is an excellent world and concept.

I do think there were some elements that could have been addressed more – like it’s said that people don’t invent things to make people’s gifts obsolete and that most people don’t push their gifts – that sounds like a recipe for a very very stagnant society.

But it doesn’t always hold together well. Like the hidden community has a rather utopian sharing of resources, everyone contributes to the whole and they don’t have currency – then they have a shop with a sale. Or there’s a point made on how Arthurian legends are true because so many cultures have the stories… but they don’t. Arthurian legends are a British and (later) French thing which have entered more wider popular culture, but you’d be hard pressed to point to even a Europe-wide collection of Arthurian legend, let alone world wide. This book is also set in England and generally does a decent job of that – but if you are English you are going to have moments of “huh? Oh, American author…” they’re not as jarring as several I’ve seen, but they’re still there.

The story also rests on a grand “chosen one” mystery… which isn’t very mysterious and some rather flat character development. Some of the characters – Kane in particular – are really flat with some very dubious decisions. And, as is sadly common for a lot of YA, Lilly and Peter decide to go off on their own to handle matters without the adults; there are reasons, but they’re also pretty dubious- especially since if involves the eternal foolishness of trusting the bad guy to be trustworthy.

The fight scenes are pretty well done, nicely descriptive, a good sense of what everyone is doing and a really well maintained feeling of action and immediacy. But we do have a lot of people collapsing because they’re injured/exhausted and then fighting again within 2 minutes

The one POC we have is a briefly mentioned Indonesian man who is on the background. There are no LGBT characters. We do have several capable women – Lilly in particular who is probably the closest thing the book has to a truly compelling character – and Brock’s mother is interesting if she weren’t so clumsily written.

I’m intrigued by the world and the concept is fascinating and one that could be really well developed. But I didn’t bond with any of the characters and had trouble caring about them, the story wasn’t strong against the big sea of world building and there were just a few too many loop holes for me to be immersed

An excellent idea but, alas, the execution was lacking.