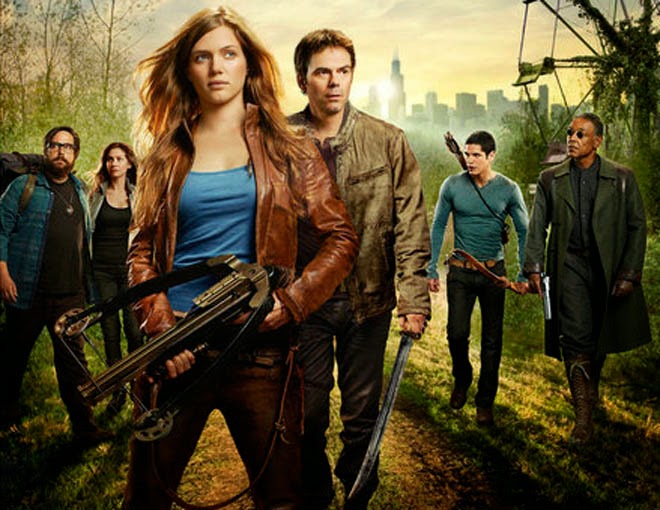 To reiterate last episode, Neville is now monumentally pissed with the Patriots and wants to burn the whole thing down – and wants Monroe to join him. He also wants Miles to join, but Monroe points out Miles probably isn’t on board with the mass slaughter/wholesale destruction thing

Miles & co have found some level of co-operation from people Marion has talked to and one of them shows them the barrel of mustard gas the Patriots have brought to town. The barrel is the size of a tanker. Also Scanlon is with them but he misses Monroe.

Marion herself spies on Truman while bringing him lunch and playing the doting partner. She finds documents that seem to indicate a plan involving/targeting the President of Texas with Mustard Gas, tomorrow which probably involves, death, destruction and provoking Texas and California to go to war. The plan? Rachel is going to go find Aaron and Priscilla who have wandered off and are being creepy elsewhere (hey, maybe the Nano can eat Rachel?) while everyone else tries to steal the train.

Scanlon turns out to be a mole for Monroe and he and Neville are quite delighted at the possibilities presented by a huge tanker full of mustard gas.

Do you know what we need? More angst. Marion shows up with resistance helpers that don’t meet Miles way-too-picky-for-this-standard but it turns out this man and daughter combo are real gung-ho to kill Patriots because his son, her brother was killed by them. And by “killed by them” we mean brainwashed by the Patriots to kill the Texas President and then Miles killed him. ANNNGST. They don’t know Miles pulled the trigger. For some reason Miles think it’s a good idea to tell them this – albeit it not right now. And also he trusts them, not because he does trust them but because he thinks good guys should trust them. This is totally reasonable reasoning. Marion also has doubts about her ability to be a covert agent as well as the awfulness of it all; Gene is there to reassure her even if he is perhaps the least reassuring person ever. Hey he could appeal to moral authority! The hint of Mustard Gas and she’s out, Gene was happy to be a fun torture buddy for some time

They use their new friends to steal the train and it’s all going smoothly until the horrible bloody mess Charlie apparently left the sentry in attracts attention by raining blood on passers by. After a firefight they get their new friend Joe to get the train moving and drive away (though why I don’t know, between them they killed an almost comic number of Patriot guards). They make off with their train.

Scanlon is waiting with all the lye ready to neutralise the gas – with Monroe, Neville and Connor. Neville and Connor check the perimeter and Connor wants to know what’s happening between his dad and Miles. Neville: “Don’t ask don’t tell”. Of course they do. Connor comes to the conclusion that because of Monroe’s obsession with Miles he’ll never succeed in getting the Republic back while Miles is still around – this is his “you cool with murdering Miles?” not-so-subtle-question.

The train arrives and the Monroe gang steals it at gun point. We have another attempt from Monroe to recruit Miles and Neville points a gun at Charlie. He remembers the whole killing his son thing. Miles steps in the way, which hardly stops Neville but with Miles under threat, Monroe points a gun at Neville. Bteween them they hit Neville and knock him out – a stray bullet hitting the gas barrel

In town Marion continues to play spy, but she’s nervous and her act is fraying around the edges as she pretends to still be in love with Truman. They go to a big community meeting – also attended by the President of Texas and the President of the Patriot US. Above them are many many many canisters of mustard gas ready to be piped into the room

At the train, Mile hears about the concert from Joe and realises it’s the real target and his team heads back, along with Monroe since, if the Patriots win this, all is lost. Connor elects to stay, not really wanting to go to a town that’s about to be gassed.

At the concert the US President starts bigging up the threat of California, calling it a “terrorist nation” that is attacking them helped by Monroe and Miles and how the US will help Texas against California. Truman gives the nod to his men to go backstage, and Marion follows him while the President continues his speech.


She finds all the mustard gas – and Truman followers her. He tells her he loves her – then stabs her. And the man prepares the gas.

Rachel finds Aaron and Pricilla because NanoPriscilla has the power on and is playing music extremely loudly (and I don’t care, I like that song) in this electricityless dystopia. Aaron answer the door with a really unconvincing “everything’s totally fine, honest now go! Go! YOU HAVE TO GO!!!!” Unsurprisingly, Rachel doesn’t leave and insists on checking out the awesome music.

Inside are several nano-zombies, the Patriot guards in their gas masks staring at a broken television, a woman brushing her hair over and over until her hair fell out and her scalp tore and bled (ok that may be the most disturbing thing Revolution has ever shown). Aaron tells Rachel the big secret about NanoPriscilla. And she gets to see Priscilla’s grand plan. The rat room – a room where the entire floor is so covered in rats that you can’t see the floor. They’re all moving in a perfectly synchronised circle – Priscilla is happy because they’re a system in agreement with itself. Content. Of course, the Nano killed a BAJILLION rats experimenting to make it so (remember that?), but success! Now time for humans…

Rachel calls this insane. I respond with a kind of non-verbal “meep” sound. NanPriscilla thinks humans always causing pain is just so terrible so slaughtering a gazillion to create ordered drones is definitely a way to go. Rachel punches her; she’s seriously pissed at her damn science project causing so much pain and suffering. She responds with “you’re the ones who made me so afraid of what I am”… which is… odd. But she loves them and won’t turn away from them. Which sounds like a threat

Later, when Priscilla goes to harvest more victims, Rachel starts looking for something to use against her. She’s not nearly as cowed as Aaron and points out the fact she even manages to hit her proves she didn’t see it coming

When Priscilla returns with her victim, Rachel points a shotgun at her and tells her to run – which she does. All Priscilla does is yell at her to come back. She angrily steps inside scolding Rachel as she brings the power back on – and doesn’t realise she’s stood in a puddle of water as Aaron makes it live. Priscilla is electrocuted and collapses; unconscious but alive. Aaron desperately appeals to Priscilla to encourage her to wake up and break out of her dreamscape.

It doesn’t work. A very angry nanoPriscilla gets up.

The gas storyline is a crafty one – and one that follows the Patriot pattern – after all, they destroyed the Monroe Republic and Georgia by using nuclear weapons. They’re not afraid of WMD, and they’re not afraid of causing mass casualties then blaming the other party to cast themselves as rescuers. It’s a pattern and one that isn’t entirely unpredictable.

Of course, even as this storyline heats up, the Nano storyline renders it moot. If Priscilla isn’t stopped then it doesn’t matter who wins.

I actually like the contrast between how Aaron and Rachel deal with the Nano. Aaron has had much more up close experience with the Nano, with it burning people, burning lots of people, bringing back the dead, trapping people in their minds. Aaron has seen it play god and it’s a very very convincing act – his fellow programmer even worshipped it. He’s not going to fight it, he’s desperately trying to placate it

Now Rachel hasn’t been as exposed to its vast powers. But she’s also absorbed a different narrative. This is her invention that has destroyed the world. And then allowed the nukes to be unleashed. These horrors are things we’ve seen her repeatedly absorb as personal guilt. Rachel feels responsible for what the Nano does – she even spent a large part of the beginning of this season near catatonic out of the sheer guilt of what she has done – and it is very much “she” she definitely personalises the guilt of the Nano. And when she sees it possessing Priscilla, she doesn’t see a separate entity – she sees her science project. She sees the thing she created, the horrible, terrible thing she did which is doing even more terrible things! More terrible things that are HER FAULT. She’s not cowed by that – she’s enraged by it.

If you want to get really deep about it - she now has an external target for her own self-loathing.

I am getting really sick of this endless, slashbaiting “tee-hee Miles and Monroe are into each other!” crap over and over and over again. Of course, both characters are only ever linked romantically and sexually with women and this show has only ever had one teeny-tiny-blink-and-you-miss-it-probably-lesbian-couple who we saw for a fraction of an episode. This kind of subtext and “humour” will not giving a damn about actual LGBT inclusion is insulting, offensive and really overdone.