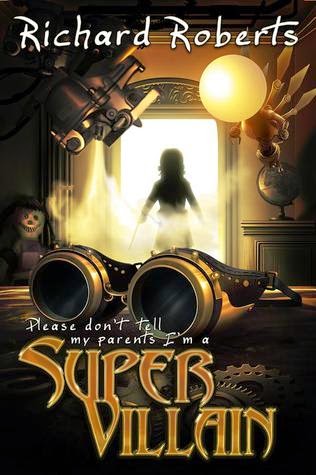 Penny Ackk, daughter of super heroes Brian Akk and The Audit has been desperate for her super powers to finally kick in – and when they did they came in with a vengeance!

Of course, her dad thinks it’ll be years before they fully develop. So keeping them secret and then springing them on him as a surprise sounds likes a great idea. Until a little problem at the school science fair means she and her best friends kind of become Super Villains.

And trying to change sides just digs them deeper in the villain put. And maintaining a secret identity when your parents are super geniuses isn’t easy anyway

But one thing no-one expected was how good they’d be at supervillainy – or how much fun it is!

This book is so much fun! I can’t remember the last time I had so much amazing fun reading a book! I literally spent my entire time reading this book with a big, silly grim on my face, broken only when I had to laugh.

It’s campy, it’s a little silly, but it’s so incredibly fun! Super heroes and super villains duking it out in the street – oh not your dark and gritty super villains who have become so popular. Far less stylish than that! These are fun super villains and super heroes – with the super heroes (perhaps) taking things pretty seriously but recognising limits and the villains are just enjoying themselves immensely. Yes, sometimes a villain takes it too far – but then their fellow villains will quietly feed them to the more extreme heroes (and then they “accidentally don’t survive a fight”). I love this sense of everyone having fun so long as everyone knows the rules, kind of, even though no-one’s ever going to expressly state it.

But, hey, there are RULES. Like you totally don’t hit people’s families or their secret lairs. That would be cheating!

I love the fact that even though they are supervillains they cling to the hope they can change sides whenever they find a suitably dramatic moment. And yes, of course it has to be dramatic – how else are they going to make sure they have an awesome backstory? Switching sides from evil to good can make for an awesome origin story, they just need the right moment. Lucyfar changes sides on a completely random basis! (Perhaps best summed up with, when they betray some fellow villains they meet a response of “you kids are awesome!”)

Did I mention it was so much fun?

I love the characters, I love Penny as a Mad Scientist, she is so utterly perfect in the role (and how her friends thoroughly embrace their roles as minions – a Mad Scientist has to have minions) and how she learns (“I built a self-destruct lever into my smelter!” yes, actual quote). She’s fun, she’s really fully developed but she still has growth through the book (as well as the lure of the dark side – which is so much fun!) I love them facing the dilemma of being villains by accident and keeping it secret in the face of her super powered parents, The Audit and Brian Ack (yes, look at their NAAAMES! Are they not perfect?). And just because you’re a supervillain by ACCIDENT doesn’t mean you don’t still have to be good at it – (otherwise people will mock you on the online forums – and yes, superheroes have fangroups. Of course they do) and they have to make sure both the villains and the heroes take them seriously (even if they are kids), which can be a tall order.

Did I mention the fun yet? Because I really can’t emphasise enough what fun it is.

I also love their friendship. Claire and Penny and Ray really work well together. They’re friends, they’re peers, they love and respect each other and their interactions are perfect. They’re excellent main characters and I could read a 100 books with them in

I also need to mention the immense fun of this book again. Because IT’S SO MUCH FUN!

We have some POC – the evil villain lair in Chinatown so there’s background people and several of the heroes and villains are described as dark skinned – including one the best heroes out there is the Mech who is described as dark skinned – so he’s there and big in the city; even if he doesn’t take a major part in the story, he, what he represents and his lair does. There are no LGBT people which is a real shame because it’s otherwise so incredibly awesome. I want it to be perfect. Why can’t it be perfect? I want my funness to be perfect!

Go, go out and get this book and read it. It’s immense fun and a pure injection of joy. If my reading list weren’t so huge I’d keep it at hand for whenever I have a bad day, sure that within a few paragraphs I will be grinning and happy again. It’s a little silly jar of glee in book form. The only thing sad about this book is that, when it ends, everything seems just a little bit more boring in comparison.

Just writing this review has left me fighting not to pick it up and reading it again.