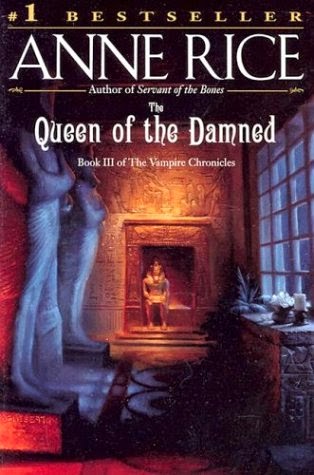 Lestat has rocked the vampire world with his music and his book revelations. But his voice has reached far more than he imagined – it has come to the ears of Akasha, the first vampire, the Queen of the Damned. For the first time in millennia, she has woken up

And she has plans – plans for Lestat, plans for the world of vampires and plans for all humanity.

It falls for a few ancient vampires to try and stop her as she unleashes carnage to realise her vision of what the world should be.

This book is 460 pages long. And like every Anne Rice books I’ve read to date it could easily be half that or less. I cannot even begin to describe the amount of redundancy and repetition there is in this book.

Usually when we get a character, the author will describe a bit about them, give some insight into their background and let the rest develop as the story progresses. Not Anne Rice. In these books we get a character and before they do anything even slightly relevant we have to have their life history. Not just their life history, but if we’re really lucky, we get their ancestry back 3 generations (at least) as well. It’s boring, it’s dull, it’s utterly irrelevant to anything resembling the plot.

I can’t even say there’s much in the way of coherent plot here anyway. A large part of the book involves recapping the last book. We have the dreams of the twins that just serve to be ominous foreshadowing – but are repeated and repeated and repeated and repeated over and over. I really can’t stress how repetitive this book is – this same dream is recounted not just from multiple sources but then multiple times from each source. And this is a theme throughout the books, we have multiple sources all thinking about Lestat and his music – but all thinking exactly the same thing about Lestat and his music. So we get the same thing over and over

And when people finally gather together their grand plan is EPIC EXPOSITION. Seriously, people being slaughtered, Askasha raging away and the gang gathers to have 2 solid nights of storytelling. The most long winded, repetitive story telling imaginable. Face the enemy with long winded folktales!

Then there’s the characters – all of who’s point of view we are treated to in ridiculous length – most of which are utterly irrelevant. At least Louis and Gabrielle and Armand have some history in the story and we don’t see too much from their POV, they’re recognised as being spectators. But the rest? What exactly was the point of Khayman? He just kind of sat in a corner and was ineffably sad. But we got pages and pages from his POV. Jesse? What did Jesse actually do? What was the point of her? What was the relevance of her Great Family? But she was there, her POV, her chapters worth of backstory was dragged up, we roped in the Talamasca for more pages of pointlessness – because none of it was relevant. None of it added to the overall plot. None of it added to the ending. None of her history or story was really relevant. And Daniel – another character inserted with a painfully long backstory and history with Armand who, like Louis and Gabrielle and Armand and Jesse, ended up being nothing more than a spectator for the – and I use the term loosely – action. These characters are not part of the story, they’re spectators, it’s like stopping a play in the middle so we can hear the biography of Mrs. Jones in the 3rd row of the theatre. It doesn’t matter, I have no reason to care, it’s pure padding

Then throw in Baby Jinx. She is there because… because. No, really, I am utterly stumped of any possible reason for her story to be thrown in. More page filling

Then there’s the desperate attempts at philosophy – but these are supposed to be immortal beings? It’s so shallow, so repetitive, so condescending and lacking in any kind of actual analysis. It’s hugely western centric, with anything non-western presented as just being barbaric and backwards and victimised. It attempts to tackle huge issues of the world like ideology and religion and genocide and war and persecution all with the same level of analysis as skill of a drunken 10 year old. What it lacks for in depth it makes up for with… yes, repetition.

All of this long winded rambling, irrelevant side characters giving us their painfully details history, shallow philosophical arguments with no real depth or thought, all cumulated in the Deus Ex appearing and solving all the problems in, say, a page. At most. Job done all solved. Damn it, couldn’t she have moved a little faster and spared me the pages I had to dig through? Seriously that is the extent of the “plot” in this book.

The one thing that was done decently was Akasha’s plan to save humanity by killing 90% of men. Not because it was a good plan – but because it was a bad plan and made clear through her backstory – the story of a woman, a zealot, who believed what she wanted to believed, who could even lie to herself, if it would justify her own actions. A woman who, in utter arrogance, would always find a way to make her will moral simply because it was her will. Of course, none of the characters (in a ridiculous debate scene) pointed that out to her – or that female serial killers and warriors existed or the fact that Akasha herself was a warlike queen who demanding mutilation, massacres, torture and execution – let alone vast genocide. You’d really think that would have been the prime counter argument.

Inclusionwise, everyone is pretty much implied to be bisexual while also making it clear that absolutely no-one is sexual. This also comes with Anne Rice’s odd description of any kind of affection and not seeing any need to differentiate over how Lestat thinks of Louis (presumably romantic love interest) or Gabrielle (his mother). David is the only character who shows bisexuality while he is alive and sexual and there’s no suggestion that we’re caught in the trap of “cannot tell the difference between friendship/romantic/familial love” that so characterises Anne Rice. It’s much more overtly romantic (albeit with some very dark undertones – including David seeming almost obligated to sleep with the people Armand seduces, as well as the murderous stalking over half the planet). Still, it is a broadly bisexual cast

While we have some random POC, they are in small, brief roles and usually end up dead (and, in one case, extra specially evil). I have no idea why all of these ancient Babylonian, Middle Eastern and Egyptian vampires are whiter than a Klan rally in a snow storm

This whole book is a painfully long collection of side plots, vague portents, painfully long exposition, irrelevant side characters and a plot that, what scraps there is, is resolved without any intervention from the characters we’ve been following at all. It’s not great to read and has a pretty unsatisfactory ending.