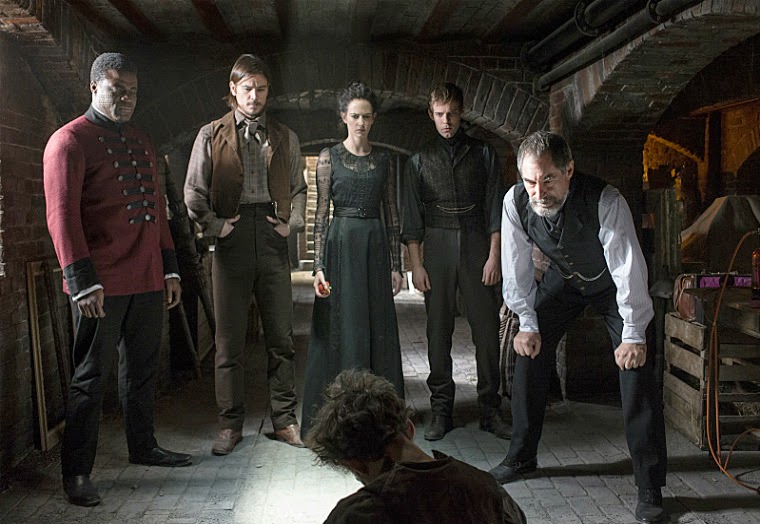 It’s dark, it’s cold, it’s the middle of the night and a young woman simply has to go to the bathroom. She makes her way from the bed she shares with her young daughter, through the dimly lit, cold house to the lavatory – and something super-fast snatches her through the window.

Really, you’d think even monsters would allow a truce for toilet breaks.

The little girl wakes up and goes to investigate her missing mother – whatever she sees in the lavatory makes her scream. Damn, that’s some heavy duty air freshener needed.

Opening credits – and a woman praying fervently in latin to a crucifix. She looks troubled – and is distracted and further troubled by a spider crawling over the cross – and then onto her hand. She seems to have some kind of fit or vision while an eerie voice says “soon my child.” And “I’m hungry”.

From there to a Wildwest show in London, 22nd September 1891. An American shows off his considerable prowess with firearms while spinning a tale about Custer and deadly Native Americans, much to the appreciation of all the crowd by one woman in black, who looks rather awesomely unimpressed.

He certainly impressed one lady sufficiently for her to show her private appreciation afterwards – having sex up against the wall of a cart. He has some excuses and really pretty words for why he can’t see her again which she doesn’t quite buy because he doesn’t even know her name (something which seems to almost amuse her).

He goes to the bar instead to stare at a pocket watch with an inscription to him (Ethan) from his dad (who I assume is dead by the pathos stare). Moping is interrupted by the Gloriously Unimpressed lady from the crowd (the woman who was praying earlier) who wants to tell him how inaccurate his story is. She wants to recruit him for some dangerous “nightwork” that may call upon his gun skills. She goes on to examine him and give a no-nonsense Sherlock-Holmes-style summation of his current state and past which is pretty awesome as well. He asks questions about the job which she responds to with further cold awesomeness, giving away nothing and thoroughly establishing Ethan’s mortality in the process. She does give him a time and place to meet him and leaves

He calls after her “Do you have a name?” To which she responds “Yes.” And she continues to leave. I think I like her.

That night he arrives at the meeting place and she leads him to an Opium Den, run by several Chinese people. There they meet an older man who is similarly uninformative; he only says they’re looking for someone, someone dear to him. The three of them go down to the basement, which is deserted, to meet 3 unhealthy, pale looking men. The older man argues with their leader in a different language while the other 2 circle ominously.

The leader attacks – and the older responds with a first to the jaw. The other 2 fight Ethan and while all this fighting is going on, the nameless woman calmly walks past the fighters, listening to the sound of a girl crying, screaming and yelling. The men fight, it’s well done, creepy, a little gorey and has a nasty little supernatural, bone creaking moment from one of the men.

The woman walks into a room filled with dead bodies, including a small baby and a recently dead woman with two tiny fang marks in her neck. A man enters, she asks him where his master is and he responds ominously before Ethan shoots him. Twice. That’s not how questioning works Ethan. The older man confirms the recently dead woman isn’t who they’re looking for.

And something stands up from among one of the piles of corpses (and nice fake out there – I’m impressed). Thin, bald, red eyed and with huge fangs – Ethan shoots him but is thrown across the room. The thing advances on the older man who draws a sword – but the woman darts between them and fixes the monster with a stare which makes it stop. While it hesitates in the face of her stare, the older man stabs it from behind. Both the woman and the man seem quite calm about the vampire they just slew.

Since whoever they’re looking for isn’t there, they assume there’s another vampire. They ask the recently deceased woman, who opens red eyes and a fang filled mouth of her own. The old man stabs her (they’re all really bad at this questioning thing) and Ethan isn’t nearly as unperturbed as the others

Next stop, the grave robbers’ (or “resurrection men” as they’re euphemistically called) little hangout. They bring a body here to get a necropsy but the man is very reluctant to help, being obsessed with his own research and rather arrogant about it. It’s only when the still-nameless woman reveals the vampire body they’ve brought that he’s thoroughly intrigued. Peeling the skin back reveals not only an exo-skeleton, but one carved with Egyptian hieroglyphics. The doctor presents his summations, rather awesomely and with minimum fuss

But Ethan has reached his limits and demands to know who they all are. The older man gives him a location to visit them the next day and the woman adds some snark. Because she’s awesome.

Meanwhile, we return to the original scene with a crowd staring at an upstairs window, covered in blood and inside, a detective and his team trying to piece together the blood stained, brutal mess of the murder at the lavatory.

Ethan arrives at the location –it’s an extremely expensive mansion – and announces to the servant, Sembene, (who is Black and has what look like deliberate scarred facial markings) he’s here to see Sir Malcolm (the older man now has a name). The lady also arrives (walking super quietly) and introduces herself as Vanessa Ives. They go into a room with an elaborate octagram on the floor and Ethan realises Vanessa is a spiritualist (medium). He asks to speak to Sir Malcom but she insists she can speak for him.

She asks if he believes in a “demi-monde” a shadow world between reality and what we feel – when he says yes, she tells him that’s where they were. She warns him how dangerous and unwise it is to stay with them which she calls “an invitation” because they are recruiting him. She adds that Sir Malcolm’s daughter was kidnapped by a vampire and they didn’t expect there to be more than one out there – so now they want to rescue her and learn about unknown out there.

Ethan actually refuses her and Vanessa continues to dodge any personal questions. Before he goes she urges him to pick a card off her table – he picks The Lovers (her tarot deck has a scorpion on the Lovers card. How delightfully cynical). She smiles.

Vanessa and Sir Malcolm talk and Malcolm insists Ethan will be back – before they head off for an appointment with the very eccentric Mr. Lyle, an expert of Egyptology to translate the hieroglyphics. He translates it as “Blood cure,” “Blood transformation” or “blood curse.” (Vanessa’s proximity frightens birds as well, it seems). As he reads more, he becomes more serious and more grim and asks to see the others (but not in the museum. “The British museum is not the place for actual scholarship, perish the thought.”) He quickly shows Vanessa and Sir Malcom the door, but not before insisting they attend his wife’s party, next Friday. He does tell them the writing is from the Egyptian book of the dead, though.

Ethan joins the crowd of gawkers that have gathered outside the murder scene, before leaving. And Sembene delivers a package to the necropsy doctor in a very poor part of town (the doctor quickly hides a hidden room and his notes before answering the door) in which is a suit and an invitation to the Explorers Club at Pall Mall for dinner. The plaque on the door of the club declares it was established by Robert Clive (Clive of India).

The Doctor arrives and notes that Sir Malcolm Murray is an explorer (he has a mountain named after him) though the doctor is abrasive and disdainful of exploration (considering it arrogant self-aggrandisement) and sees no relation between exploration and his own seeking the truth through science. Though he doesn’t care much for any sciences either, or knowledge for knowledge’s sake – only “piercing the tissue between life and death”. He’s quite passionate about it – Sir Malcolm even compliments him on having “the soul of a poet” and the doctor shows surprising wit with “and the bank account to match”. He wants to employ the doctor because he’s not constrained by preconceptions and is open to the idea of “the supernatural”

The doctor things Sir Malcolm is playing and starts to leave – and Sir Malcolm shows some anger and reveals he wants to find his daughter – and he will murder the world if he has to. That intrigues the doctor. Murdering the World and Terrible Wonders are right up his alley.

Malcolm goes home (Ethan watching the house obsessively) and gets ready for bed – and has a terrifying vampire-ish visit from Mina, his missing daughter. She disappears again afterwards. He talks about it with Vanessa – she’s sure Mina (her true friend) wouldn’t have hurt him “nature doesn’t change only our circumstances” but he is not nearly so sure. She also blames herself for Mina being taken. Malcolm doesn’t see the use in that, they can’t change the past, they will both live with their guilt.

Vanessa returns to feverish prayer – only now the candles float and collapse, her crucifix is inverted and a wave of spiders pours from behind it.

The not-so-good doctor returns to his lodgings and to his secret chambers, all full of electricity. And the body he has on ice – and connected to the lightening of the storm. Lightening that shorts the circuits and plunges the room into darkness. When he gets his lamp working, the body has vanished.

Or moved – it is across the lab. And it is animate. The doctor introduces himself to his creation – Victor Frankenstein.

Ooooh I love the opening credits. No, really, it has excellent atmosphere. In fact, atmosphere is definitely something this show has aimed for and got perfect. It’s creepy, it’s gothic, it’s gritty, it’s dark, it’s foggy – it’s Victorian London of the Penny Dreadfuls and it’s done perfectly. The setting, the scene, the feel of the show is perfect. The music, the drama, the tension – love it.

And the actors are pretty good too (not that I would ever expect less from Timothy Dalton), Vanessa and Sir Malcolm are awesome, creepy, classy, intriguing and powerful. Even Ethan comes across as intriguing with a strong sense he’s going to be more than your average alpha male fighter with manpain.

Did I mention the setting is awesome? Because it is. And not afraid to be gruesome either. And there’s a wonderful establishment of moral ambiguity as well.

This has all the potential to be really, truly awesome.