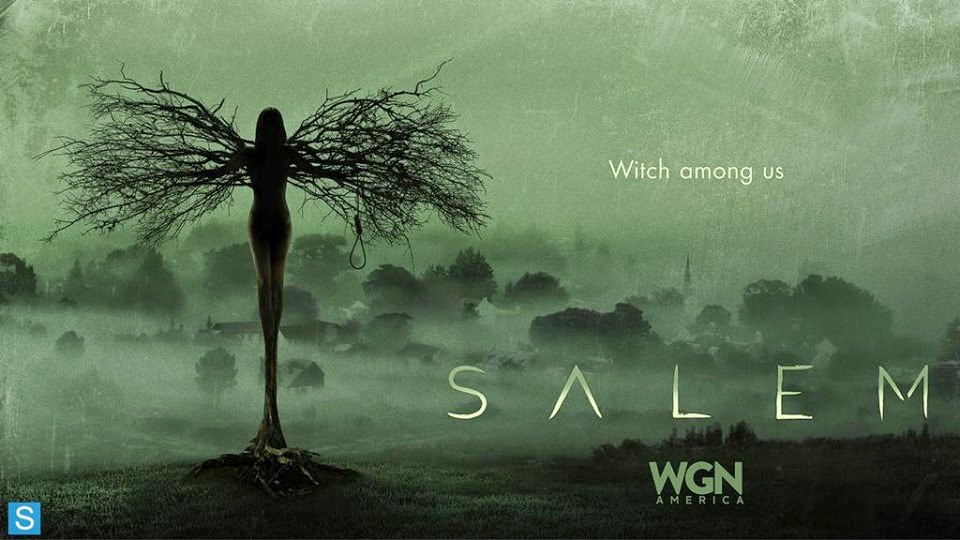 Anne wakes after some very troubled dreams – she gets up and washes her face to help wake up  and her eyes are black from edge to edge. This is not a good sign; but when she wipes her face they go back to normal. And the really creepy doll that Mary made and snuck into her room moves

Isaac drags the body of the hanged innocent Bridgette out of the town to be disposed of with crowds gathered and shouting – some angry at her death some more righteous. Tituba disagrees with the whole spectacle of taking the body through the centre of time and Mary chews Cotton out for just standing their silently rather than speaking to the crowd and trying to comfort them – he is a reverend after all. He tries but everyone ignores him except John who joins him to accusing him of hanging innocents.

They both run to the sound of Anne yelling in the orphanage; without Bridgette thieves tried to ransack it. John chases off the thieves and lets Hale and Cotton know they’re the ones at fault – as does Anne, Hale’s daughter.

As John takes Anne home she asks what happens to Bridgette’s body – and he tells her, no sugar coating. For which she thanks him.

Magistrate Hale yet again tries to stop Mary, the Grand Rite and the witch panic she’s inciting and he’s quite annoyed that she doesn’t respect his opinion more. She’s equally pissed at him questioning her – and that he still hasn’t ferreted out who was spying on their Sabbat. To find out, Hale goes to see the Seer who confirms that Isaac was the one who saw them – but there was someone else with him.

John followed Hale and enters the Seer’s hut when Hale leaves; he finds it empty except for taxidermy – which comes to life when he turns his back. And since one of the animals is a wolf that’s a little worrying. It attacks him and Hale pulls him to safety. John protests that dead animals came to life but Hale dismisses it, Petrus (the Seer) is just far too normal, honest, now back off or else.

George Sibley tries to stick his fingers down his throat to remove the frog – it doesn’t work and Mary leaves him in his own vomit for the day. Which is when Isaac arrives to compliment Mary on how saintly she is for caring so for her sick husband. She has a bond with Isaac over their shared experiences when he was branded (and when Abby, the woman Isaac loved, ran away – who Isaac still thinks about), the night she lost her child.

As he walks away, Isaac is grabbed and a sack put over his head. He is taken to the place where unhallowed bodies are left to rot. Hale and another witch – one in rags who doesn’t seem to live in town – use magic (nasty, messy magic) to question Isaac about seeing the Sabbat. Isaac insists he was alone. Afterwards Hale plants evidence of witchcraft on him and sends him back to town spelled – though the outcast witch argues (saying “Mary” so I assume he wants them to consult Mary) which enrages Hale.

In the brothel, Cotton is with the prostitute Glorianna who is worried and crying – if Bridgette, considered a paragon of virtue in the town, can be accused and killed for being a witch then what about her and the other sex workers? Especially since they were also accused last episode. Cotton tries to assure her that he had irrefutable evidence and Glorianna raises the ongoing theme with Cotton – does he truly believe in what he’s doing or is he just trying to please his father. They’re interrupted by commotion downstairs – a spelled Isaac has broken into the brothel and is causing a ruckus, accosting the women. Brave, hypocritical Cotton sneaks out the back window so he can dress and come in the front and pretend he isn’t a patron.

Isaac runs through the street ranting until John stops him and Hale has him arrested. Mary sees and is furious at Hale acting without consulting her and orders him to do nothing further. Despite that he still tries to speak with Isaac, but the doctor has already sedated him

Outside the cage John sees nothing suspicious – Isaac got drunk and went on a bit of a bender (“a young man’s prerogative”) but Cotton decides the man is spelled – and that the man is a witch. Yes, John demands Cotton make up his mind.

Mary goes to see Rose, a witch elder outside the town, to ask if she can hold the loyalty of the coven without Hale. The coven’s split on lines of ambition – and Rose thinks Hale hates having to follow a woman. Mary hates being questioned all the time but Rose seems to hit back that they lack “primacy”, unquestioned leadership isn’t their way it seems. Mary has some powerful emotion about what she gave up – her baby, John – and she can’t have it all have been for nothing. Rose warns her about Hale not being someone to underestimate.

As she goes home John walks with her and warns her that Isaac will hang unless she helps. When she doesn’t immediately answer he snarls at her for having changed so much and become so cold and heartless. When she learns that Hale tried to question Isaac despite her orders, she throws all in with John.

Cotton has another of his little self-doubt, guilt moments. He watches as Isaac speaks to a figment that he can’t see – the spelled image of Abby, visible only to Isaac. It has been cast by Mary to try and convince him to tell her who was with him when he witnessed the Sabbat; he tells the spectre that it was John.

Mary drops in on Hale the next day and lies, telling him Isaac was alone. But they have another argument – Hale wants to have Isaac hanged to both ensure he doesn’t tell anyone anything and because they need more innocent victims for the Grand Rite. Mary adamantly refuses – but he challenges her; she can’t stop him. He considers her sentiment a weakness that makes her vulnerable.

After Mary is gone it leaves Hale, his wife and daughter Anne – who continues to tell Hale what a terrible person he is for pushing the witch persecutions. Hale leaves, refusing to listen and Anne waits for her mother to condemn her for speaking so out of turn to her father; she doesn’t, she agrees with every word (including her low opinion of Mary). She does advise Anne to imitate Mary though – no matter how they both hate her, she’s a woman who has found a voice when so few women are heard. “You can use your voice any way you like, but you have to find it first.”

Mary goes to John and tells him to stop Hale however he can. When Hale and his guards arrive to take Isaac to trial, John stands in the way and gives them all the surly-eye. He fights the guards.

Mary starts casting another spell, which Tituba disapproves of – whether over John or Isaac, this isn’t useful to them. Mary says it’s to make Hale step into line. In Anne’s bedroom, the chucky doll starts moving around again – getting supremely creepy. Anne doesn’t run screaming out of the window (which would have been my reaction) and she starts to choke, collapsing to the floor and bleeding from the mouth

The guards continue to beat up John the Surly and Cotton decides that while he’s totally fine with hanging midwives, he draws the line at three men beating a fourth so lets Isaac out to even the odds. Not much evening but then a messenger arrives to tell Hale something up with his daughter and he abandons the attempted trial to hurry home

The doctor says there’s nothing he can do (he’s not very useful this doctor) and Hale, seeing the Chucky doll, goes to Mary to beg for his daughter’s life. She forces him to Respect Her Authoritay and she points out that, far from his accusation, she’s actually already lost everything she cares for. Unlike him – he is the one whose sentiment makes him vulnerable.

John asks Cotton why he helped and Cotton claims respect for a fair fight. Hale arrives then to agree that Isaac was just drunk and there’s absolutely no reason to have any kind of trial for him. John releases Isaac who is stunned that someone stood up for him

Cotton goes to Glorianna and holds up Isaac’s innocence as proof of his thoroughness and that he isn’t just hanging people for funsies. Now more sex! Glorianna is not so easily reassured. And even suggests leaving with him – he declares he’s doing good. Glorianna responds “your father would be very proud” (which makes it pretty clear she thinks its daddy issues, not morality, driving Cotton).

Isaac brings a bouquet of flowers to the brothel to apologise for his behaviour (It seems like a tiny thing, certainly vanishingly small, but at least he recognised that the sex workers were owed an apology when everyone else completely discounts them).

John and Mary have a moment and Mary warns John she can’t protect him. She goes home and finds one of her knitting needles are missing – George has it and is using it to stab himself in the leg.

I think I’ve missed something on Salem. John’s dad was very important – so that means he can just rampage around hitting town guards et al without repercussion? Can he does something more than scowl and grump around? I really don’t see what Mary was supposed to see in him.

I’m glad there’s some analysis of the sexism of the time. Some of it works – I think Anne’s mother’s point is an excellent one – how Mary has found a voice in a system that allows so few women voices, even if they hate what she does with that voice, she has found power.

Hale’s challenge of Mary seems less well founded. After all, his ultimate disagreement with her is that he disagrees firmly with what she’s doing – he thinks it’s dangerous and fears the witch panic. A disagreement we can assume he would hold if she were a man. However his constant refusal to consult with her and his frank throwing down the gauntlet shows a considerable level of contempt underestimating her – which is well challenged with her victory.

It would be nice if one of the people found innocent was a woman – and the only one who escaped the noose was a man.

Cotton’s becoming something of a more layered character – his eternal daddy issues clearly drive him more than any real moral drive. And I do like how clear they are that he is a hypocrite and a moral coward, with his actual conscience firmly at war with what he’s actually doing