The angel war is heating up again, this time involving a little girl eating a banana split and, hopefully, catching the world’s most annoying parent in the crossfire.

Castiel calls the Winchesters telling them something is happening in Missouri, which completely gives Dean and excuse to wake Sam up with loud music (it’s a big brother’s prerogative). No Castiel doesn’t tell them why but hey, it’s Castiel and he’s weird and dorky. Of more concern is Dean carrying the First Blade which Sam would rather he leave at home – at very least reserve it for the big boss fights, not killing trash. Seeing how disturbed Sam is, Dean agrees.

I call shenanigans – Dean totally has the blade hidden in his bag, he never gives in that easily

To the crime scene where Castiel has already got them an in with the impersonating federal agents thing (one of these days that really has to come back and bite them), giving them the names Agent Spears and Agent Aguilera – because he’s noted that Sam and Dean use the names of popular musicians as aliases.

6 humans and 1 angel died – which Castiel considers super abhorrent. Which I’m not sure I understand since the death toll is quite low compared to past conflicts.

Metatron, meanwhile, is trying on ankle length duster coats. You will NEVER look as cool as Cas, Metatron, don’t even try. 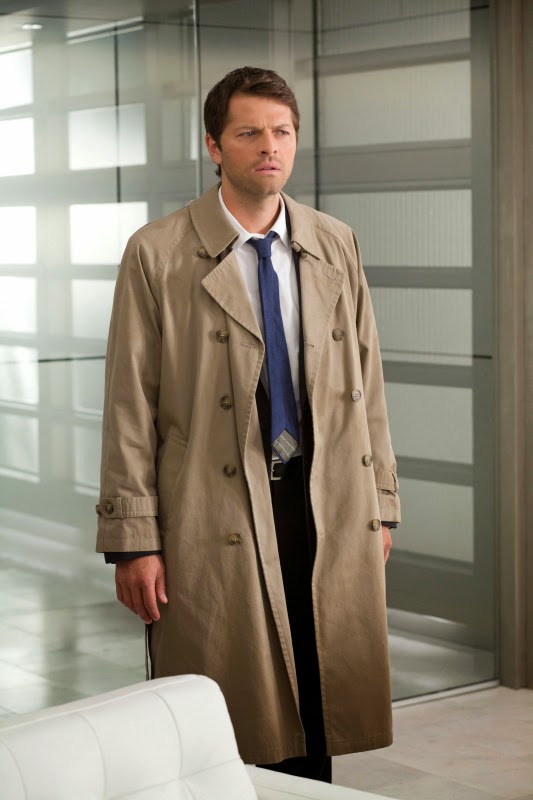 And he’s further frustrated by angels being so damn literal. Gadreel thinks they’re loosing and insists to Metatron he is loyal despite meeting with Castiel before. Metatron seems to have lost the whole master storyteller vibe and is now frustrated that all the angels are choosing Castiel over him; he has no idea why anyone would choose Cas (cute and charming) over him (positive traits that make even Gadreel give him a dubious look). Gadreel reminds Metatron that, for reasons no-one understands, he made Cas a leader of the opposition

The last independent faction is led by an angel called Tyrus and Metatron has to win him over.

Over to Castiel’s camp and Dean and Sam are freaked out by how organised Cas’s army is, (under second in command, Esther) by the fact they’re calling him commander and the fact they have a role call (“they like to hear me say their names.” Awww Castiel) – and an angel is missing. They assume that this angel, Josiah, is probably the mole. They track him down – but one of the angels also has a video of the ice cream parlour massacre – and angel came in and killed himself to kill another angel saying “I do this for Castiel”. Castiel is horrified, nauseated and Dean throws down some reality – Cas tries to be good but he has his own cult. He also throws out the reality that the last time Castiel was super powered he killed lots of people and lied about it

Sam insists they take it somewhere private and that Dean buries those particular issues for now. Dean wants Cas to hang back while they investigate, again, because it’s a cult and they can’t get honest answers with Cas around. Castiel refuses to do nothing so he plans to track Josiah – and Dean insists Sam goes with him “to help”, though Castiel thinks it’s because Dean doesn’t trust him

As Sam and Cas drive, they talk about Dean’s anger which they put down to the First Blade which is likely. But Sam does add that Cas’s cult is a little creepy – and it’s scary what devoted faithful followers can do in your name, when you’re set up as a god. Castiel doesn’t want to play god he wants to “lead his people home.” See, lines like that don’t reassure anyone, Cas. They do follow Josiah’s trail though to a building radiating angelic power – which neither Cas nor Sam can get in

No-one seems to have hit the flaw in the plan of analysing Dean’s rage issues – they’ve left him alone to question angels which he does at knife point and with lots of violence and threats. He does learn the dead angel’s friends though – Constantine and Tessa. The Reaper, Tessa. Dean tracks her down – and finds she has the same explosive suicide rune that the dead angel has. He chains her to him – and asks where Constantine is

Metatron is trying to recruit Tyrus at a bowling alley – which Tyrus loves. Which is the problem – Tyrus doesn’t actually want to go to heaven, it’s boring up there, Earth is more fun, he likes being independent – and he doesn’t like Metatron. Nor does he fear Metatron’s threat – but hey he’ll reconsider if Metatron can out bowl him. Which doesn’t happen; but we do find where Constantine is. He has his own suicide rune – which he uses (dedicated to Castiel) near Metatron

Dean takes Tessa to the cells in Castiel’s lair (where the Angel he held at knifepoint is expressing her disgust to everyone else about him), where Tessa declares there is no god, only Castiel. Yeah, that’s not healthy. Anyway, the angels draw the line at allowing Dean to slice and dice Tessa. But Castiel’s second in command actually has some very good reasons why not – beyond morality, Esther points out Castiel is all that holds all these warring angels together and setting the precedent of independent stabbing and torture is a bad idea. He hands over the angel blade

Ironically, it’s Dean who has to drag her out when Esther tries to go for Tessa when Tessa says Castiel ordered the suicide bomb and that Esther’s just too weak for it. Alone, Dean asks Tessa, aside from fanaticism, why does she want to kill herself? And we’re reminded of the real cost of this war beyond the angels – all the souls that were heading to Heaven are now lost, confused and in endless screaming pain, which she hears and cannot endure any longer. She tells him, again, that Castiel put her up to it and scoffs when Dean says it’s not like Castiel. There’s also more like her out there and when she refuses to talk, Dean pulls out the First Blade

Told you Dean wouldn’t have left it at home. She asks what he did and he says “what I have to” which is her line – and she deliberately impales herself on the blade.

Sam and Castiel make their way past a lot of pop-culture based trap to find… a distraction and a trap. With Josiah inside, burned by holy oil. He was a mole – and he hates Castiel – before he dies, he tells Castiel he doesn’t see an angel looking back when he looks in Cas’s eyes.

When they return, they find the angels have tied and locked Dean up. They release him and Dean and Sam bicker some more before they all get a call from Metatron, just calling to tell Castiel that his suicide bomber failed; though it did kill Tyrus and allow Metatron to recruit his followers. Metatron offers an amnesty to all angels to come back to Heaven and points out that their rabid cult following of Castiel just proves how much they need a leader. He also brings up both the suicide bombing – and Castiel’s stolen grace. Something he hasn’t shared with his followers. Metatron adds that all Castiel cares about is himself and the Winchesters

Metatron is ecstatic about how it all worked out – but Gadreel is pissed. He recruited Tessa, Constantine and the others and Metatron lied to him and then brainwashed them. Metatron thinks it’s great – it has perfectly followed his narrative planning. Gadreel is pretty disgusted with the whole thing

Cas and the Winchesters return to the Winchester cave and Sam tries to talk to Dean about the blade – and Dean goes over the edge. He has decided that until they kill Metatron they are no longer a team, they are a dictatorship under Dean.

Dean talks to Castiel, asking how much grace he has left, which Castiel avoids. Dean respects someone not wanting to talk about something. Castiel really wants to know if Dean thinks Cas was behind the bombing; Dean is sure he wasn’t – he gave up his army over the life of one man. And they don’t need an army, the three of them have always been enough.

And Gadreel arrives. Metatron has made him snap. Gadreel begs for a chance to prove himself – and Dean slices him with the First Blade. Castiel and Sam rush in to stop the berserk Dean.

I have to say I quite like how Castiel has adapted to Metatron dropping all that pop culture knowledge in his head. He now gets the references, names etc – but he still doesn’t UNDERSTAND them.

It is interesting to see the frayed edges of Dean’s relationship with Castiel – which is fair. As much as I want to fanpoodle Castiel all the way (which I do), Castiel has epicly messed up on a monumental level on more than one occasion. And, no, he doesn’t have a good history as a leader and angels are dangerous not just for their power, but because most of them have an utter need to follow someone (which is really nifty and makes sense given the whole “lack of free will” and the fact they were created as divine servants.) I’ve said it multiple times before, Dean doesn’t deal with his issues (even less so than Sam), he suppresses them and moves on – so with the First Blade making him more on edge, all those suppressed issues are going to rise. If anything, it makes Dean the utterly worst person to carry it.

Which is why I think the Blade works (and the series should have been working on this and the angels much longer rather than all the filler) – it changes Dean while keeping him fundamentally the same. His anger, control issues, violence and general buried ick are all being brought to the fore – but they’re all Dean issues.

We have some power shenanigans again. Remember when angels were the nuclear weapons of the world? When they could kill people with a touch? Where they were so incredibly dangerous that everything feared them? Well… what happened to that? When did they become disposable? When could Dean start intimidating them? Was it just a different branch of angels we saw?