Race on The Vampire Diaries and The Originals 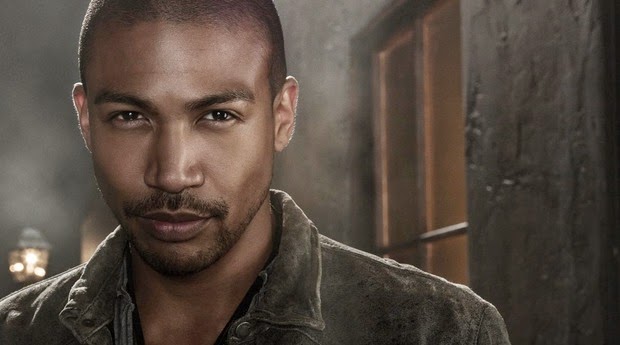 Way back in 2011 we made a post about Race in The Vampire Diaries; but a long time has passed since then. It’s now 2014, more than enough scope for things to change, right?


Sadly no, The Vampire Diaries and it’s spin-off show, The Originals continue to make the same problematic depictions. The old themes of death and servitude continue. About the only thing that has changed is that Caroline has diversified her palette.


Yes, Mystic Falls is not a safe place - the death toll for anyone on this show is high, but the attrition rate for POC is quite ludicrous. In addition to the deaths we mentioned in that last post, we have since seen Bonnie’s father, Rudy; the hunter Connor, The Traveller Maria, Qetsiyah (Tessa), Jesse the vampire, Enzo’s lost love Maggie and a number of POC background snacks, spell fodder or otherwise sacrifices (such as Pam, a POC town member… who was introduced along with her quickly killed husband for the Traveller spell). Frankly, there’s not a lot of POC on the show - and when they appear I can hear a clock ticking down until their inevitable doom.


It’s not even just the death rate - which is huge - it’s the way those deaths were treated. Ok, some of them - several of them - were enemies and we were never meant to feel sad for, like Connor. But did Bonnie ever get to mourn her father? Truly mourn the loss of her dad? Or get to deal with the rapid disappearance of her mother? Did we get any real scenes with Bonnie being comforted for this loss? Or was she too busy trying to hide her own death from her friends? What about Jessie, the disposable experiment for the Ripper vampire? Caroline was so upset when he died… for an episode. Then everyone moved on, his death was just a tool to introduce the concept of the Ripper vampire. The same applies to Marie and Maggie, both deaths were tools - only these characters were fridged to make their men all ragey. Has the death of a single POC on this show been treated as something to mourn?


And The Originals? I can’t even count. Celeste/Sabine, Monique, Agnes, Papa Tunde, perhaps Sophie, innumerable witches whose names I can’t even remember but have been vampire chow forever. Marching bands of humans sacrificed en masse. Diego and numerous background vampires who were chowed on by Klaus or Guerrera werewolves. We had, technically, a number of background POC in both the supernatural groups - and they were the ultimate cannon fodder. There was, technically, a huge number of POC - but when the season ended Marcel and Francesca (an enemy so likely dead next season) were the only ones left standing.


There’s one death we have to look at as well - Bonnie’s. In our previous post we mentioned how much Bonnie existed to serve the White characters - especially Elena. But this season we took it a step further - Bonnie became a noble avatar of self-sacrifice.


First, she died to save Jeremy. Once she had martyred herself for him, her prime concern as a ghost wasn’t coming back to life or even grieving for her father - she was concerned that Elena and Caroline may be sad and kept her death a secret. When they finally discover it they have a beautiful funeral - in which Bonnie comforts her friends. At her own funeral, she was there to make them feel better (and her secret was only discovered because everyone was annoyed that Bonnie wasn’t on call when they needed her).


It’s not just that Bonnie continually exists to save others - she’s not allowed to save herself. Bonnie thinking about herself seems to be a great taboo. When she becomes the Anchor it’s not because she wants to be alive again - it’s because Jeremy wants her back (he even lies to force it on her), Elena needs her and Damon needs her for his plan. When the Other Side is under threat, she just gives up - it’s only when other people are in danger that Bonnie starts investigating a way to stop it disappearing. Bonnie isn’t allowed to say “I want to live. Save me”. She has to live for other people, her life has to be saved as a side effect of helping others.


Just as The Vampire Diaries has Bonnie as a source of so many problems, The Originals has Marcel


When I first saw Marcel on stage singing How You Like me Now, I must admit he caught my eye. Little was I to know that this  character, who I initially found so intriguing, would come to exemplify many of the stereotypes often associated with Black men.


Marcel began his life as a slave on his White father’s plantation. He wasn’t even given a name because his mother wasn’t sure that he would live to see adulthood. One day, when he is whipped for taking an apple, Klaus decides to force Marcel’s father to grant him his freedom, names him and raises him as his own son. This sounds great right? Well it doesn’t last long. For all the love Klaus professes to have for Marcel, he will not tolerate Marcel being in a relationship with Rebekah. This very much reads as a White man (read: Klaus) having to save the White woman (read: Rebekah) from the lascivious Black man (read: Marcel). Interracial relationships have historically been frowned upon; however, when it’s the White man choosing to cross the racial divide, society tends to do a bit of tsk tsk and turn the other cheek. When it is the White woman engaging in sex with a man of colour, then she has of course been despoiled. The woman’s body, regardless of her consent is universally seen as the property of White men and through his actions against both Rebekah and Marcel, Klaus reified this point. Klaus very firmly
put Marcel in his place.


When the Mikaelson family returned to New Orleans, Marcel was running the town but of course that was not to last now that the White men had returned to take control. This was an unfortunate ill thought out plot line because Klaus, being an Original, and a Hybrid to boot, far outmatched Marcel. No matter how intelligent Marcel was, or the allies he gained, Marcel could never possibly hope to defeat Klaus. This of course is set up for story reasons; however, the end result is that it not only empowers White masculinity, it cast it as superior to Black masculinity. A clear pecking order was most firmly established once again and should we, as an audience doubt it, it was made positively clear when Marcel was forced to give Klaus his surrender on his knees. In 2014, The Originals somehow thought that it was a good idea to have a Black man kneeling in front of a White man.


Shortly after Rebekah leaves the show, Marcel gets into a sexual relationship with Camille. If you’re counting, that’s two White women who just happen to be blonde that Marcel is attracted to. After a one night stand, the two decide that they cannot continue a relationship because Klaus would most certainly not approve. I suppose for his part, Marcel knows after what happened with Rebekah that he can only love the White ladies on the side.


Marcel is the uppity Black man who cannot take a hint. He refuses to be submissive to his supposed betters and pay legitimate respect and he keeps finding a way to sneak into the bed of White women. It’s telling that I have never really seen Marcel with a woman of colour and it is further telling that Marcel was set up to fail as an antagonist from the very beginning and in the end he is punished for his presumption by losing everything and only survives because of Klaus’s generous mercy. Marcel is the poster boy in how not to write a Black male character.


The Originals didn’t do much better with Celeste. Elijah and Celeste have a relationship in the past and she is killed by Klaus. For Elijah, this is more punishment for him to angst over. Celeste however manages to find a way to live on by taking over the body of several witches over the centuries.  Of course, Celeste has a nefarious motive - Celeste wants revenge against Elijah.  The woman actually spends centuries plotting said revenge and no matter how Elijah talks about how he loved her and wanted to honor her, Celeste will not hear reason. Celeste isn’t just the wronged woman, she is the poster child for the angry Black woman. Celeste isn’t even capable of expressing any emotion beyond rage and even when it is clear that her rage will be her undoing, Celeste soldiers on. Of course, Celeste dies for having the audacity to come against the ever so White Mikaelson family. She wasn’t good enough for Elijah according to Klaus and in the end, she wasn’t strong enough to win the fight she started.


This is another pattern, when we look back at The Vampire Diaries we see Qetsiyah. Immortal, angry, powerful woman of colour who is literally willing to spend centuries - and completely upset the natural order - to get her revenge on her White lover and his White love interest. After being resurrected literally millennia after her death she is still entirely dedicated to the vengeful torture of her ex. This is setting whole new records of unhinged anger and taken with Celeste we have an almost comically ridiculous pattern.


Usually when we look at tropes and issues we either look generally over a range of shows or focus on a pattern in one show. The Vampire Diaries and The Originals are unique in that they are two shows that are extremely closely connected, with cross-over characters - and the same tropes and themes dog both. Examining them both together adds to a pattern of problems that is already large in both - and extreme when combined.


And when combined we have an enormous number of dead POC and some equally terrible POC who are firmly kept in their place - servants, self-sacrificing or uppity ones who need to be reminded of where they belong. This is all complete with a full bingo-card of tropes that is become almost impressive in their scope and completeness. As with our last post, we have to say again that mere inclusion of multiple POC is not sufficient for good representation. The quality and variety of the portrayal also matters - not collecting stereotypes and tropes or being cannon fodder or tools for the White cast, their development and their storylines.