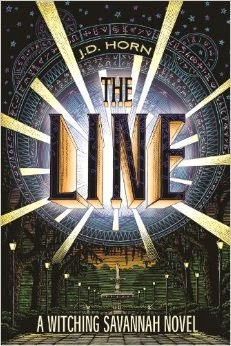 Mercy Taylor is the one member of her infamous Savannah family who was born without magic – somewhat unusual since her family is one of the few worldwide who protect and maintain the Line. The source of magic in the world.

But she can deal with that, she has all her life. A little more difficult is dealing with her growing feelings for her sister’s boyfriend – and the temptation of forbidden magic to deal with that little problem.

Even that pales when Ginny, the cruel and dominating family matriarch and holder of the Line, is brutally murdered. What could possibly have killed a woman of such power – and what will be the aftermath as a new guardian is chosen?

Oh this book has intrigued me. I love that feeling when I pick up a book and I can feel the depth of the history behind it. When I know the author has created a world setting, storyline and cast of characters so large and adaptable that they could probably write dozens of stories in it without having to expand beyond what they have already established in their own head – and I can feel all that with only the tiniest crumb of it being revealed.

The history and nature of magic, the old class divide when the demons where in charge, the demons and shadow entities themselves, the founding of the original families, the rebels, the anchor of the line, the different magic specialties, the sprawling side families even the prophecy all comes together to hint at a vastness that could go on and on.

In some ways, the depth and complexity of this world has a problem because not everything was explained. The magic system is complicated, but the history of magic, the origin of witches and the line is explained – but then we’ve got demons and dark-outsider-spectre-demonish-figures and a strange evil hospital and rogue families and prophecies and different dimensions… towards the end I kind of wished that some of these had been expanded more or there’d been some kind of guide. Or perhaps another book in the series to help me get a solid hold on what exactly happened

Especially since this is a book that relies on twists. Twist, twist and revelation and twist! Secrets coming back from the past, long injustices and everyone – absolutely everyone – lying over and over again. And even when you find them out they turn out to be lying about the revelation! It’s mystery on mystery with big reveal after big reveal. It’s generally excellently well done and there’s a whole lot I never predicted or imagined but I just wish more had been added in so I could follow these twists

I’m also very impressed with the characterisation. All of these characters were developed and deep – not perfect, by any means. But they’re not meant to be perfect – they have their flaws and their rough spots – because they have their histories. These are characters who have lived – and it feels like they’ve lived.

There are a number of complex, flawed and interesting women. While Ginny and Maisy are not deep, there’s an attempt to explain why they are the way they are. Mercy’s aunts are kind, gentle and flawed women – including one struggling with alcoholism but still being far more than just an alcoholic. Being an alcoholic definitely shapes her character but it isn’t the entirety of her character anyway. Even her deceased mother is given the same flawed-but-understanding treatment, the revelations about her both condemnatory but also forgiving and understanding when it would have been far easier to go for a full on shaming.

And I like Mercy, despite her circumstances she wilfully refuses greed and jealousy and does her utmost to accept things as they are even if she doesn’t like them. She’s funny and makes her own happy way through life despite the injustices dealt to her – and doesn’t become defined by those injustices while, at the same time, not making excuses for the treatment of her. She doesn’t always make perfect choices – but she does make understandable ones. And her treatment of the potential love interests is also excellent, both refusing to pursue what she desires out of respect for her sister (even when she’s out of the picture) and fully and fiercely calling out the man who violates her consent (this is me tip-toeing around spoilers) in what is an all-too-often-ignored-in-the-genre use of magical coercion.

I’m not entirely happy with her resolve with regards those love interests at the end, since I think there were other options but I can see why she chose what she chose.

There’s Oliver who is an out gay men, he has power, he’s respected in his family and he’s more than capable. He doesn’t follow a lot of the stereotypes we often see and is generally positive in his interactions with Mercy. I like him, he’s a pretty great character without the problems you see with a lot of gay characters, I was surprised.

But there are a couple of problems. Firstly, Oliver is not only pretty obsessed about other men (it does seem to make up a large part of his character) but his magic – his mind control magic – is even termed a “need to seduce”. There’s an edge of predatory or at least sex-obsessed gay man about him.

He is also a victim of homophobia – both in the past and present  - which I’m not opposed to per se because, sadly, it happens, but it could be better. In the present it’s a gratuitous slur the bad guy throws out to show how bad it is – and is unnecessary. In the past he has a whole history full of badness that is shaped by homophobic abuse – it is presented as being a terrible thing but because the terrible thing caused him, in turn, to do terrible things the focus is far more on his guilt and people’s anger at him (and him trying to atone) than on the really unacceptable abuse he suffers. It’s not a bad portrayal and in no way is the homophobia ever presented as good or acceptable – but I think Oliver’s guilt and the condemnation doesn’t properly consider it.

There are a number of POC, including the police detective and several inhabitants of Savannah, but the main character has to be Jilo who is dark and mysterious and dangerous and practices evil magic while at the same time being weaker and inferior to the Taylor witches – she’s both dangerous and inferior which doesn’t make for a great portrayal at all. Redeeming her, we do note she has a very justified and ongoing long standing grudge against the Taylors which is at least part of why she is depicted as evil. In fact, she is considerably fairer to Mercy than her family ever is. And while she does fit the stereotype as the poor hoodoo woman, even that is revealed to be an act to play on the ridiculous stereotypical assumptions of the people who buy services from her.

This book has a complex and original world setting with a lot to explore. It has some compelling, very real characters with complex and overlapping emotions all following a story that was compelling, twisty and pretty interesting. And it has a number of minorities who impressed me. That’s ticking all the boxes – a little more world building development, and a little less losing me and this book is up there with some of the best.