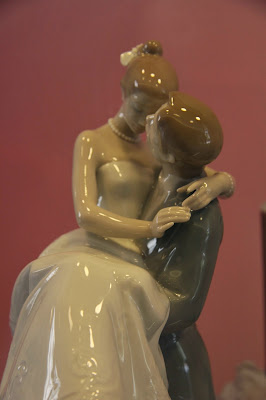 Urban Fantasy is a wide and rich genre. The whole world’s mythology is open to development and weaving into broad, diverse and amazing stories. We have monsters beyond count, creatures beyond measure and more legends than you can shake a stick at. With such scope, you would think infinite variety awaited us - yet some of the same tired tropes keep arising that are not only infuriating, but seem like such a terrible waste of the potential the genre hands us.


Take that most classic (and heteronormative) of stories - boy meets girl and twu love happens; and almost inevitably the boy will be stronger than the girl. In a world where we have vampires, werewolves, fae, demigods, angels and wendigo (always the wendigo) we still can’t seem to get past the idea of weak womanhood and big, tough manly men.


How many supernatural paranormal romances have a fragile human woman or girl falling in love with a supernatural creature?


Many of these take a human woman (at least at the beginning of the series) who knows absolutely nothing of the supernatural world - her ignorance making her even more vulnerable compared to her mystical, experienced and informed male love interest. They are not even close to each other in terms of power, experience, knowledge or capability.


If she does manage to be an supernatural she’ll almost inevitably be weaker, younger or otherwise less powerful or less experienced than her male counterpart. Even when she’s powerful, her male lover will inevitable be more so.


This applies to pretty much all the Dark Hunter Series that aren’t listed above.


The Vampire Diaries starts with Elena as a mortal - so inherently weaker than her vampiric love interests - and the bridge is hardly closed when she becomes a new born vampire contrasting with their centuries of experience.


Charlaine Harris brings us The Southern Vampire Mysteries with Sookie Stackhouse - but her woo-woo hardly serves to empower her - in fact, it makes her more vulnerable than anything else and certainly never puts her on par with her shapeshifter, werewolf or vampire love interests.


The Mercy Thompson Series has Mercy be a skinwalker - definitely supernatural but it’s abundantly clear that Adam, and any werewolf, are immensely more dangerous than she is. Even the Alpha and Omega series took werewolf Anna and paired her with one of the most lethal werewolves of them all - Charles, the Marrock’s own enforcer and executioner. Her own enhanced physical powers are easily eclipsed by his


In Kelley Armstrong’s Otherworld Series we have the necromancer Jaime and half-demon Hope - both with supernatural gifts that are certainly useful in places, but certainly not in any kind of physical confrontation or combat. Both of them are paired with werewolves, the bruisers of the world setting. The one female werewolf in this series, Elena is paired with Clay the terror of werewolf kind, the most dangerous and brutal fighter - ensuring that even with her physical prowess she is still eclipsed by his strength.


In Nalini Singh’s Guild Hunter Series we have Elena who is a skilled and powerful hunter who later becomes more. A powerful character, definitely - but she’s paired with Raphael, an Archangel; a being that is so much more powerful than Elena it defies description.


Jeaniene Frost’s Nighthuntress Series is a particularly frustrating example - as Kat increasingly grows in power and even develops her own unique woo-woo that should bring her close to Bones in power… but never seems to quite manage it. He always stays ahead either through age and experience or by her having to borrow powers that she can never quite master. The Night Prince Series doesn’t even try to pretend Vlad and Leila are peers.


In the Underworld Detective Agency all of Sophie’s love interests are stronger and more powerful than her nearly-pure-human-mess (but then, so are small children. She’s not the most competent of characters). H&W Investigations may give Shiarra a magic belt to prevent her for being completely helpless but she is beyond overwhelmed (and often in need of rescue and protection) from her love interest. And I love the Kara Gillian Series with a fiery passion of a thousand suns, but, again, Kara is not on par with her love interests in terms of power.


So many of the Black Dagger Brotherhood Series took either completely ignorant humans like above (Dark Lover, Lover Eternal, Lover Unbound), or the woman is a much weaker vampire than the warrior Brother (Lover Awakened, Lover Avenged).


On top of this repeated disparity in power, even when the woman is supernatural and has her own power there will often be something in the story that will actively disempower her or weaken her in comparison to her love interest; often requiring him to provide comfort, support or even rescue and protection.


Returning to the Guild Hunter Series both Elena and Raphael have a terrible tragic past that stays with them - but guess which one have night terrors and needs support? Yes, Elena. And it’s not a bad thing, it’s an excellent depiction of PTSD and trauma and I praised it as such - but she is the one who suffers and needs support, Raphael’s own tragic past doesn’t have him leaning on her to nearly the same degree.


This continues through the genre - men with tragic manpain lash out and are angry and stompy and dangerous and tortured; their pain isn’t weakness, it’s something else for the women to endure (Black Dagger Brotherhood, and Dark Hunter Series are huge classic examples). Their pain isn’t used to make them weak and vulnerable - it’s part of their violence and aggression.


In case trauma isn’t enough to make a female love interest sufficiently vulnerable to uphold the greater power of their male love interest then the world building will add more pressure. The Otherworld series makes Elena the only female werewolf and therefore a target for assault and rape by every other werewolf. The Underworld Detective Agency gives Sophie highly desirable and hunted woo-woo - but no real capabilities to defend that woo-woo. The Protector has a powerful female character - and then some random need to be mated to protect herself from a culture that will demands women have a partner or face rape.


This is actually a trope that Twilight actually comes close to subverting - albeit only at the very last book and on a clearly temporary level: while Bella is stronger than Edward due her new made status, it follows 2 books where Bella’s fragility has defined the series.


Similarly The Otherworld Series by Kelley Armstrong tries for a subversion by giving Elena greater authority than Clay - this only happens at the very end of a long series in which Elena’s vulnerability and Clay’s need to protect her has been repeated over and over again.


It’s noted that in these subversion, there’s nearly always a qualifier of some kind. Even when there is no qualifier, such as in Lauren Dane’s Rowan Summerwaite series or the Otherworld Series’s Paige and Savannah the male love interest is usually the woman’s equal or only a little lesser in power. He’s not likely to rely on her for protection or support or to be completely eclipsed by her power and strength - the subversion is that he is her equal or close to it, not that she is the stronger one (or very very rarely).


Not every series follows this pattern - but a huge number do - enough to far overwhelm any counter examples. And I’m not even saying this pattern is inherently bad or that these individual books or series are bad (far from it, some of them I love). Nor, for that matter, is physical prowess the only form of strength or indicator of a good character (again, several of these women are awesome characters) - but it’s worth noting that if you don’t need physical prowess to be strong and violent capability isn’t the only example of strength then why this doesn’t occur more in male characters?


The problem, like with all tropes, is that this pattern is repeated over and over to the point where it is a surprise when it doesn’t occur and the outright opposite of this is near non-existent (I have come across very few examples of a human male being brought into the supernatural world by a powerful and capable female love interest - and even then there’s usually SOMETHING to “redress” the power balance). The problem is that the overwhelming presence of this trope has almost become a rule and it speaks volumes for our views on masculinity, femininity and how different sex relationship have to work. The problem is that these views of “how things should be” are so overwhelmingly entrenched that even when dealing with vampires, werewolves and wendigo, we still have to apply them.


It comes to something where we have 8 billion representations of vampires from the angsty to the sparkly, but a woman being stronger than her male lover seems to stretch our imaginations.
Posted by Sparky at 9:00 AM